Does Japan export food that is unsafe to eat in Japan?

This claim states that some of the foodstuff that leaves Japan is deemed unsafe there because of the radioactivity levels, and is exported to places with more lax restrictions, like the United States. 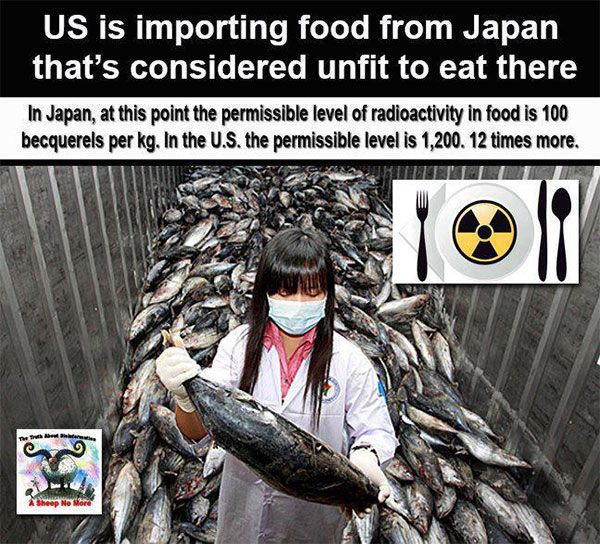 It's possible that Japan is exporting food to the US that is above the Japanese maximum allowable limits and below the FDA limits, but the FDA has only found one sample of imported food from Japan that had detectable levels of gamma-ray emitting radionuclides and it was still below the FDA derived intervention level.

In the US, the Food and Drug Administration (FDA) allows 1200 becquerels per kilogram in imported food. (Scientific American — Radioactive Fish Near Fukushima Suggest Ongoing Contamination, FDA — 560.750 Radionuclides in Imported Foods - Levels of Concern).

Regarding this difference, the NRC says (Scientific American):

The more restrictive action taken by the Japanese seems reasonable for the population living close to Fukushima because they receive radiation doses from other sources, including non-fish food, drinking water and land surface contamination.

The FDA has addressed the issue of importing food from Japan in FDA Response to the Fukushima Dai-ichi Nuclear Power Facility Incident.

To date, FDA has no evidence that radionuclides from the Fukushima incident are present in the U.S. food supply at levels that would pose a public health concern. This is true for both FDA-regulated food products imported from Japan and U.S. domestic food products, including seafood caught off the coast of the United States.

As of June 20th, 2012, FDA import investigators had performed 32,685 field examinations for radionuclide contamination. FDA had tested 1313 samples, 199 which were seafood or seafood products. 1312 samples had no Iodine-131, Cesium-134, Cesium-137, or other gamma-ray emitting radionuclides of concern. 1 sample was found to contain detectable levels of Cesium, but was below the established Derived Intervention Level (DIL) and posed no public health concern. (Test results)

Not the answer you're looking for? Browse other questions tagged nutrition radiation japan fukushima-daiichi .

16
Is there any real benefit in the everyday use of surgical masks to protect oneself from radiation?
47
Is Japan's Fukushima nuclear disaster "on par" with Chernobyl?
16
Is the Fukushima disaster causing an increase in infant mortality on the west coast of North America?
10
Was stable iodine distributed post-Fukushima by the Japanese government?
12
Could Fukushima daiichi cause the health problems suffered by the USS Ronald Reagan crew?
15
Were "comfort women" well-paid?
2
Is Fukushima Dai-ichi responsible for earless bunnies?
11
Did just 18 people die from prostate cancer in Japan in 1958?