Picture scraper @Globe_Pics, which has 520,000 followers, tweeted the following (currently 205 retweets, and 135 favorites): 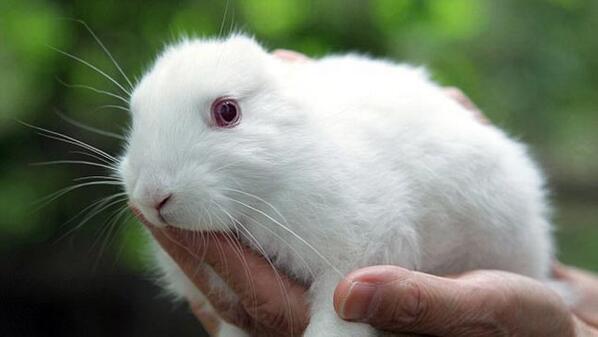 Earless bunnies were born in Japan after the Fukushima Nuclear Disaster.

Real pic but bunny ear loss isn't exclusively caused by radiation; there are other factors. http://www.dailymail.co.uk/news/article-2002249/Japan-tsunami-earthquake-Earless-bunny-born-near-Fukushima-raising-new-nuclear-fears.html

The Daily Mail article states or quotes the following:

While the Daily Mail is well-known for publishing articles about science, it isn't as well known for reliability, so I'm not confident about it being used to evaluate a claim.

Was the Fukushima Dai-ichi accident responsible for earless bunnies?

It's very hard to say what is the cause of the bunny's situation, however, it's a somewhat common phenomenon, which is caused mainly by mutilation and not genetic defects.

An NBC news article from 2011 cites University of Miami biologist Dana Krempels, and rabbit expert on the issue:

There are many different reasons a rabbit may be born this way or acquire this characteristic early on, not least of which is a stressed mother rabbit who overgrooms her babies to the point of mutilation. This is the most common reason we see baby bunnies with missing ears or limbs. So while it's possible that the earless condition of this baby is congenital (i.e., bun was born with it), it's also possible that it was acquired after birth.

I have to wonder whether there are any other bunnies in the group that have anomalies like that. I didn't see any. And that would make me very hesitant to cry 'Radiation!' just because one baby bunny is missing his external ear pinnae.

I can't tell from the video whether the bunny has ear canals covered by the fur. If not, that would tell us that this isn't a result of a mother's overgrooming, but rather some kind of birth defect. Whether it's due to radiation or some other factor is not possible to say, since these types of malformations do occasionally occur in the absence of known mutagens.

Sadly, only time will tell whether the radiation leaks are affecting the germline (i.e., the cells that will become eggs or sperm) or embryos of human and non-human animals in the irradiated regions of Japan. But a sample size of one bunny is far too small to make a positive conclusion.

Dana Krempels (Ph.D) appears on the University of Miami Biology Department site as a Senior Lecturer and Director of Undergraduate Studies. Also, several sources online cite her as an expert on rabbits wheekwheekthump.com, allexperts.com.

Also, this phenomena is well documented to happen in other places, even before the Fukushima accident:

An ABC news article about a German earless baby bunny crashed to death by a TV cameraman.

A blog post telling (and showing) about someone's earless bunny.

Not the answer you're looking for? Browse other questions tagged zoology fukushima-daiichi anatomy .