Did Lucretius write about evolution and natural selection?

Robert Krulwich of NPR claims that Professor Stephen Greenblatt claims that Lucretius (around 99-55BC) said:

... moving randomly through space, like dust motes in a sunbeam, colliding, hooking together, forming complex structures, breaking apart again, in a ceaseless process of creation and destruction. There is no escape from this process. ... There is no master plan, no divine architect, no intelligent design.

All things, including the species to which you belong, have evolved over vast stretches of time. The evolution is random, though in the case of living organisms, it involves a principle of natural selection. That is, species that are suited to survive and to reproduce successfully, endure, at least for a time; those that are not so well suited, die off quickly. But nothing — from our own species, to the planet on which we live, to the sun that lights our day — lasts forever. Only the atoms are immortal ...

That's not a complete theory of evolution (e.g. there is no inheritance with mutation mentioned) but it is a rather surprisingly detailed version of a modern theory - particularly the choice of words ("intelligent design", "evolution", "principle of natural selection").

(Of course, the translation may be modern, allowing the translator the option of picking modern terminology.)

In the interview, Greenblatt makes no such claim (transcript). A very quick search revealed no sources that don't also come via Krulwich.

Did Lucretius have a passage that can be translated to the above in his works, with provenance prior to Charles Darwin's publication?

p.s. Lucretius also describes atoms, but that is less apparently anachronistic, so it isn't part of this question. 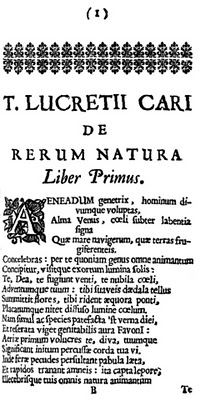 The passage is a paraphrase of "De Rerum Natura" by Lucretius. Note that, while he does propose natural selection and puts forth a non-creationist view of nature, he doesn't really propose a theory which is similar to evolution. He suggests that novel creatures are literally born out of Earth (in womb-like cavities).

Earth was colonized by subsequent geni and races

In the beginning, earth gave forth, around The hills and over all the length of plains, The race of grasses and the shining green;

As feathers and hairs and bristles are begot The first on members of the four-foot breeds And on the bodies of the strong-y-winged, Thus then the new Earth first of all put forth Grasses and shrubs, and afterward begat The mortal generations, there upsprung— Innumerable in modes innumerable— After diverging fashions. For from sky These breathing-creatures never can have dropped, Nor the land-dwellers ever have come up Out of sea-pools of salt. How true remains, How merited is that adopted name Of earth—"The Mother!"—since from out the earth Are all begotten.

First of all, the race Of the winged ones and parti-coloured birds, Hatched out in spring-time, left their eggs behind; As now-a-days in summer tree-crickets Do leave their shiny husks of own accord, Seeking their food and living.

Then it was This earth of thine first gave unto the day The mortal generations; for prevailed Among the fields abounding hot and wet. And hence, where any fitting spot was given, There 'gan to grow womb-cavities, by roots Affixed to earth. And when in ripened time The age of the young within (that sought the air And fled earth's damps) had burst these wombs, O then Would Nature thither turn the pores of earth And make her spurt from open veins a juice Like unto milk; even as a woman now Is filled, at child-bearing, with the sweet milk, Because all that swift stream of aliment Is thither turned unto the mother-breasts.

In those days also the telluric world Strove to beget the monsters that upsprung With their astounding visages and limbs— The Man-woman—a thing betwixt the twain, Yet neither, and from either sex remote— Some gruesome Boggles orphaned of the feet, Some widowed of the hands, dumb Horrors too Without a mouth, or blind Ones of no eye, Or Bulks all shackled by their legs and arms Cleaving unto the body fore and aft, Thuswise, that never could they do or go, Nor shun disaster, nor take the good they would. And other prodigies and monsters earth Was then begetting of this sort—in vain, Since Nature banned with horror their increase, And powerless were they to reach unto The coveted flower of fair maturity, Or to find aliment, or to intertwine In works of Venus. For we see there must Concur in life conditions manifold, If life is ever by begetting life To forge the generations one by one: First, foods must be; and, next, a path whereby The seeds of impregnation in the frame May ooze, released from the members all; Last, the possession of those instruments Whereby the male with female can unite, The one with other in mutual ravishments.

Not the answer you're looking for? Browse other questions tagged quotes evolution .