Did a Jewish prisoner write this quote about God and forgiveness?

According to a number of social media sites, including Reddit:

“If there is a God, He will have to beg my forgiveness.” — A phrase that was carved on the walls of a concentration camp cell during WWII by a Jewish prisoner.

Is this attribution correct?

It's very likely correct. The correct original quote should be:

It is a quote that supposedly appears on the walls of the jails of Mauthausen concentration camp, according to the documentary they show to people at the camp tours.

I have found many anecdotal confirmations of this.

I finally managed to track down a copy of said documentary, unfortunately in Italian, and it does make that claim. Given that is shown in the same concentration camp, I have no reason to doubt it's true.

In the prison of the camp, called the 'bunker', they give lice to prisoners for experiments with pesticides, but the camp's prison serves primarily to isolate the prisoners. The camp's Gestapo wants to extort confessions and holds the prisoners in cells, to beat them bloody, to torture them: for many this cage is the last stage of life.

While, usually, on the walls of the cells there are writings expressing hope, or testimonies of a wakeful spirit which rebels against bowing down, here we find the last monologue, a sign of discouragement, despair, of imminent death .

My God why have you forsaken me?

To bend means to lie

If there is a god, he must ask me forgiveness

These writings were found, after 1945, on the walls of the cells. 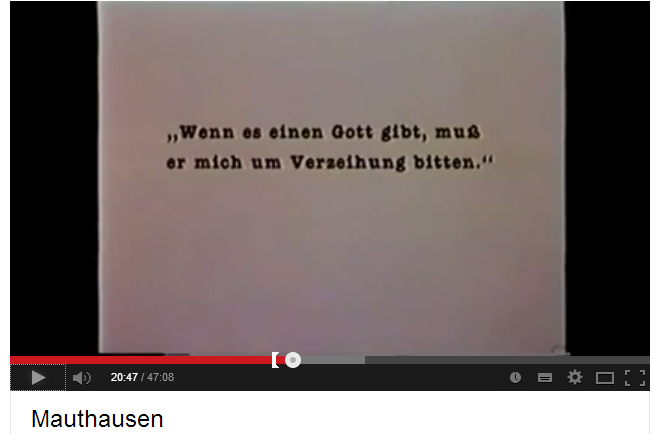 Given that the documentary is indeed showing the walls of the Mauthausen jails while this is described by they are (freshly) painted white, I think that the writings are not there anymore, so finding a picture will likely be almost impossible.

There is no proof that these were written by a Jewish prisoner:

Yet it is possible that some of the authors were Jewish:

Update: I've found on the official Mauthausen Memorial web site, a German and English translation of the documentary which is called "Rückkehr unerwünscht (return undesirable)". The interesting part is still at 19m20s.

4
Is this video of a Muslim cleric denying heliocentrism authentic?