Did the wealth gap shrink under Trump (pre-pandemic)?

According to an op-ed piece by the Wall Street Journal Editorial Board, the Federal Reserve has published a report (https://www.federalreserve.gov/econres/scfindex.htm, I believe, or https://www.federalreserve.gov/publications/files/scf20.pdf for a somewhat more readable version) indicating that the lowest-income households in the US increased in overall income and savings during the pre-pandemic Trump years while the wealthiest mostly stayed where they were or dipped a little. Is this an accurate description of the overall findings of the report? (For example, is this an accurate description overall, or are they carefully selecting the data points that support their argument while ignoring those that do not?) If so, how credible is the report itself?

Again, I am specifically interested in the following information.

Regarding income, the board's pdf (which you've linked to) says on the first page e.g. that

Between 2016 and 2019, families that were high wealth, had a college education, or identified as White non-Hispanic experienced proportionally smaller income growth than other groups of families but continued to have the highest income

As noted in the comments, income is not wealth, and you haven't quoted anything WSJ said on wealth, except in the headline "The Wealth Gap Shrinks". But even on that the board's pdf e.g. says (p.2):

Families at the top of the income and wealth distributions experienced very little, if any, growth in median and mean net worth between 2016 and 2019 after experiencing large gains between 2013 and 2016

Families near the bottom of the income and wealth distributions generally continued to experience substantial gains in median and mean net worth between 2016 and 2019.

The SCF survey itself is not new having been conducted for almost 3 decades now. I rather doubt there is any devastating critique of its methodology somewhere (and hasn't made it to Wikipedia)...

I'm really not sure why this was even a question here. If you really want to ask "how is this possible", economics SE is a better place to ask that... If you want a hint for that, the recovery in wealth after the 2008 crash appears to have had longer lags in the lower tiers. 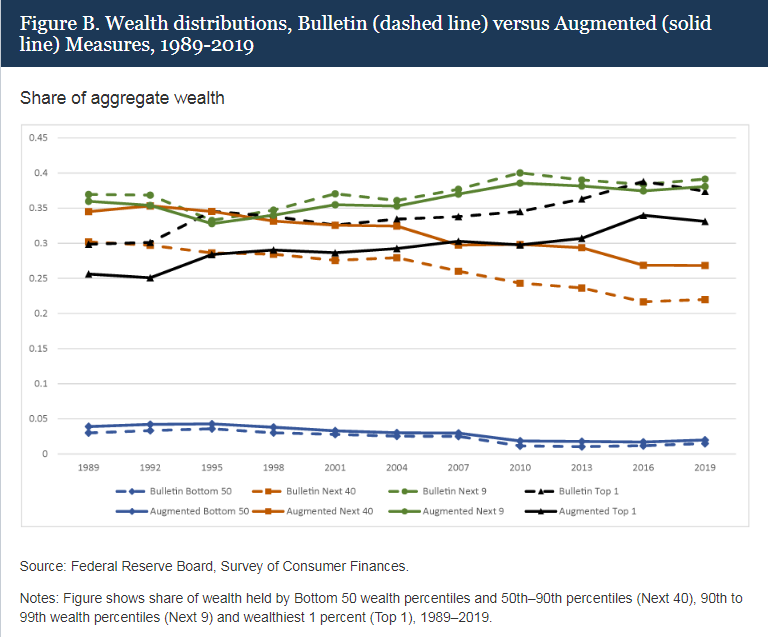 They even dare say that (after some commentary that the absolute change is small--a fact evident from the graph too):

The data collected in the 2010–2016 SCF surveys indicated that the sustained economic growth that followed the Great Recession had initially accrued primarily to the wealthiest families. These 2019 data were collected at the end of the longest economic expansion on record, when growth spread more equitably to the larger segments of the distribution.

0
x percent of people own y percent of the wealth
17
Did Ivana Trump claim under oath that she had been raped by Donald Trump?
40
Did Donald Trump get America's GDP growth to 4.2%?
10
Were 51,000 Pennsylvania jobs lost under the Obama administration?
27
Is there a wealth gap in Boston where the median net worth of white households is $247,500 while the median net worth for black families was $8?
89
Did Donald Trump fire the entire pandemic response team in 2018?
4
Has any US official said that the economy cannot be "fixed" if the pandemic is not "fixed"?
53
Has the distribution of income and wealth in the USA got much more skewed towards the rich in the last 4 decades?