Did Donald Trump fire the entire pandemic response team in 2018? 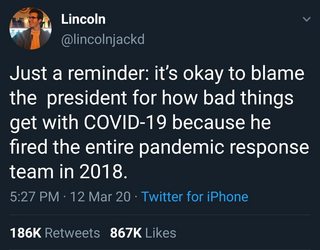 Text: Just a reminder: it’s okay to blame the president for how bad things get with COVID-19 because he fired the entire pandemic response team in 2018.

While another tweet suggests that it was merely restructured: 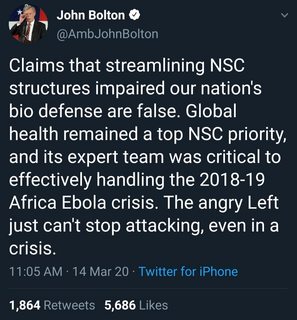 Although it's not true that Trump himself 'fired the entire pandemic response team', it is true that in April-July of 2018 the Directorate of Global Health Security and Biodefense was dissolved, and its staff moved to other departments of the U.S. National Security Council which were not focused on responding to a pandemic.

Further, this dissolution was done as part of an NSC restructure performed by John Bolton a few weeks after he was appointed to the position as National Security Advisor by Donald Trump, so if it was not done explicitly at the direction of Trump he at least (presumably) gave Bolton permission to do so.

As reported on at the time by the Washington Post (though other similar articles can be found):

The top White House official responsible for leading the U.S. response in the event of a deadly pandemic has left the administration, and the global health security team he oversaw has been disbanded under a reorganization by national security adviser John Bolton.

The abrupt departure of Rear Adm. Timothy Ziemer from the National Security Council means no senior administration official is now focused solely on global health security. Ziemer’s departure, along with the breakup of his team, comes at a time when many experts say the country is already underprepared for the increasing risks of a pandemic or bioterrorism attack.

The personnel changes, which Morrison and others characterize as a downgrading of global health security, are part of Bolton’s previously announced plans to streamline the NSC. Two members of Ziemer's team have been merged into a unit in charge of weapons of mass destruction, and another official's position is now part of a unit responsible for international organizations.

White House homeland security adviser Tom Bossert, who had called for a comprehensive biodefense strategy against pandemics and biological attacks, is out completely. He left the day after Bolton took over last month.

There are actually two fairly related news stories about this. Reuters rated that social media account about the NSC pandemics team dissolution as "partially false" because some people were reassigned to similar positions, but there were substantial changes to other agencies presence (e.g. CDC) abroad, especially in China. (I personally find the latter story more relevant than the shuffling of chairs at the NSC.)

The Global Health Security and Biodefense unit — responsible for pandemic preparedness — was established in 2015 by Barack Obama’s National Security Advisor, Susan Rice. The unit resided under the National Security Council (NSC) — a forum of White House personnel that advises the president on national security and foreign policy matters.

In May 2018, the team was disbanded and its head Timothy Ziemer, top White House official in the NSC for leading U.S. response against a pandemic, left the Trump administration, the Washington Post reported. Some members of the global health and security team were merged into other units within the NSC, the article said.

Tim Morrison, former senior director for counterproliferation and biodefense on the NSC, wrote in another Washington Post Op-Ed, “It is true that the Trump administration has seen fit to shrink the NSC staff. But the bloat that occurred under the previous administration clearly needed a correction. … One such move at the NSC was to create the counterproliferation and biodefense directorate, which was the result of consolidating three directorates into one, given the obvious overlap between arms control and nonproliferation, weapons of mass destruction terrorism, and global health and biodefense. It is this reorganization that critics have misconstrued or intentionally misrepresented. If anything, the combined directorate was stronger because related expertise could be commingled” [...]

There is disagreement over how to describe the changes at the NSC’s Directorate for Global Health Security and Biodefense in 2018. The departure of some members due to “streamlining” efforts under John Bolton is documented. The “pandemic response team” as a unit was largely disbanded.

Verdict: Partly false: The Trump administration disbanded the “pandemic response” team, but some of the team members were reassigned to roles that included pandemic response.

Reuters on the US CDC cuts in China, March 26:

WASHINGTON (Reuters) - The Trump administration cut staff by more than two-thirds at a key U.S. public health agency operating inside China, as part of a larger rollback of U.S.-funded health and science experts on the ground there leading up to the coronavirus outbreak, Reuters has learned.

Most of the reductions were made at the Beijing office of the U.S. Centers for Disease Control and Prevention (CDC) and occurred over the past two years, according to public CDC documents viewed by Reuters and interviews with four people familiar with the drawdown. [...]

The CDC’s China headcount has shrunk to around 14 staffers, down from approximately 47 people since President Donald Trump took office in January 2017, the documents show. The four people, who spoke on condition of anonymity, said the losses included epidemiologists and other health professionals. [...]

“The CDC office in Beijing is a shell of its former self,” said one of the people, a U.S. official who worked in China at the time of the drawdown.

Separately, the National Science Foundation (NSF) and the United States Agency for International Development (USAID), the global relief program which had a role in helping China monitor and respond to outbreaks, also shut their Beijing offices on Trump’s watch. [...]

The White House declined to comment or respond to questions from Reuters regarding the U.S withdrawal of staff in China.

The CDC did not respond to detailed questions submitted by Reuters about the cuts. It has insisted its staffing levels did not hinder the U.S. response to the coronavirus.

“There are many factors that go into decisions around staffing,” the CDC said in a statement.

Some health experts were skeptical that more CDC employees operating inside China would have made a difference in stemming the outbreak. [...]

“The problem was China, not that we didn’t have CDC people in China,” said Scott McNabb, a former CDC epidemiologist who is now a research professor with Emory University. He pointed to China’s censorship as the main culprit in the spread of the pandemic, which has infected at least 435,470 people worldwide, killed 19,598 and upended the global economy.

Reuters first reported about changes to CDC staffing in China on Sunday. The news agency revealed that the Trump administration had eliminated the position of a U.S. trainer of Chinese field epidemiologists, who were deployed to the epicenter of outbreaks to help track, investigate and contain diseases.

In a press briefing on Sunday, Trump criticized the Reuters story as “100 percent wrong.” Yet the CDC acknowledged the position had been cut. The agency said the decision was made because of China’s “excellent technical capability,” and said the elimination of that post did not hamper the U.S. effort to respond to the coronavirus outbreak. [...]

Over the last two years, the White House has pushed U.S. agencies with a presence in China to de-fund programs there along with the positions to manage them, according to the U.S. official who spoke to Reuters.

The source said Terry Branstad, the U.S. ambassador to China and a former Republican governor of Iowa, tried to remind the White House of the importance of the U.S. presence in China but was told to “get with the program” by an administration official.

“The White House saw the relationship as one-sided and without benefit to the U.S.,” the source said.

Not the answer you're looking for? Browse other questions tagged united-states politics donald-trump covid-19 .