Does Great Britain have the lowest state pensions (relative to average wages) in the OECD? 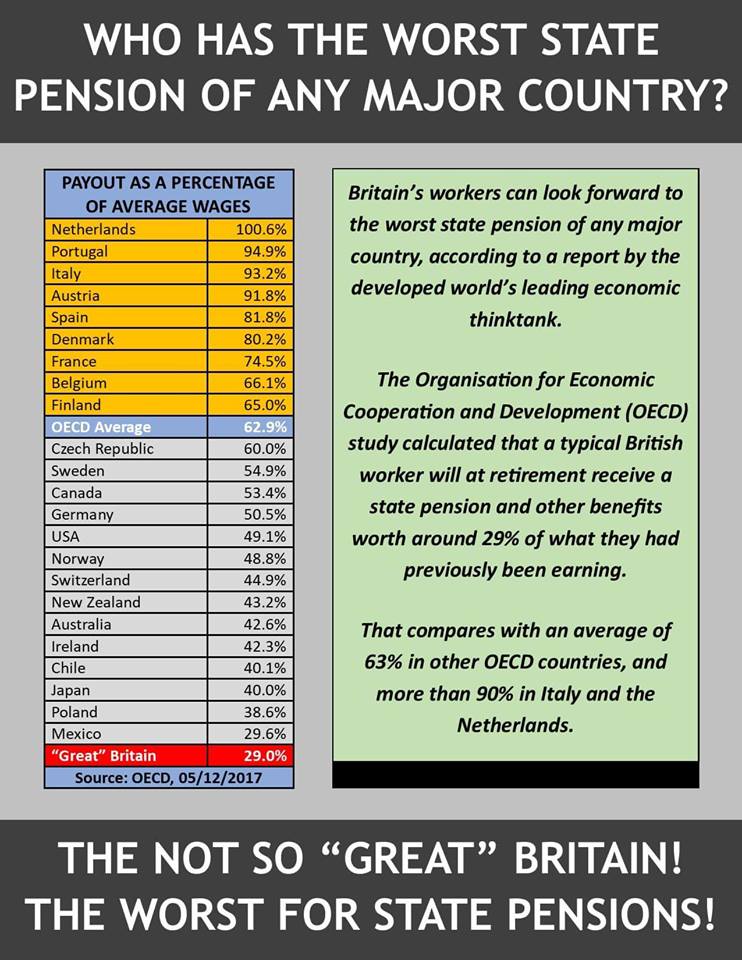 It is arguing that Great Britain is the 'worst' in the developed world, and I'm sceptical of a few assertions made here.

The numbers in the claim are correct for total state-mandated pension, but wrong for state pension only. The numbers are confirmed by OECD sources for total pension earnings from mandatory pensions for average earners, compared to earnings immediately before retirement. The fact that the UK ranks worst is a consequence of the fact that participation in workplace pension schemes is voluntary in the UK and has historically required active opt-in, whereas it has been completely mandatory in countries like Netherlands, Italy, Denmark, and France: employers must offer a pension scheme (which is usually private), and employees must be enrolled in those. I think it would be wrong to consider such private pension schemes as a state pension.

Whether the UK does or doesn't have the worst state pension does not follow from the OECD evidence presented. The claimant, along with The Telegraph, The Guardian, and the Financial Times refer to the presented numbers as referring to state pension, but they actually refer to all mandatory parts of the pension system. In the UK, state pension and state-mandated pension is the same, because the UK does not mandate participation in workplace pension schemes, although since 2012, enrolment has been automatic. In many countries, the state does mandate such participation. In those countries, for most people, state pension is not the same as state-mandated pension. Therefore, strictly speaking, the claim is incorrect, because state-mandated non-state pension schemes are included in the numbers. By this interpretation, The Telegraph, The Guardian, and the Financial Times are all wrong.

From the OECD publication Pensions at a Glance, 2017:

Net replacement rates for future retirees from mandatory parts of the pension system for low and average earners, % of previous net earnings: 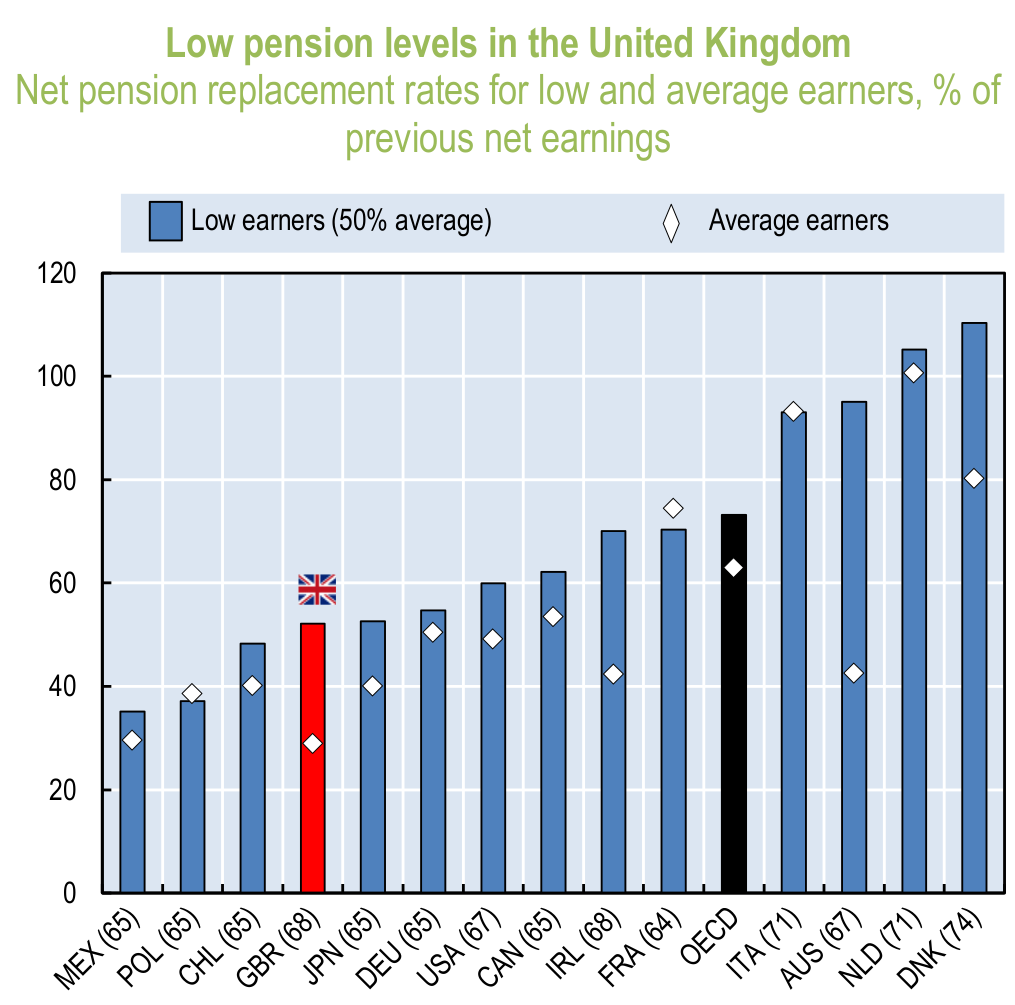 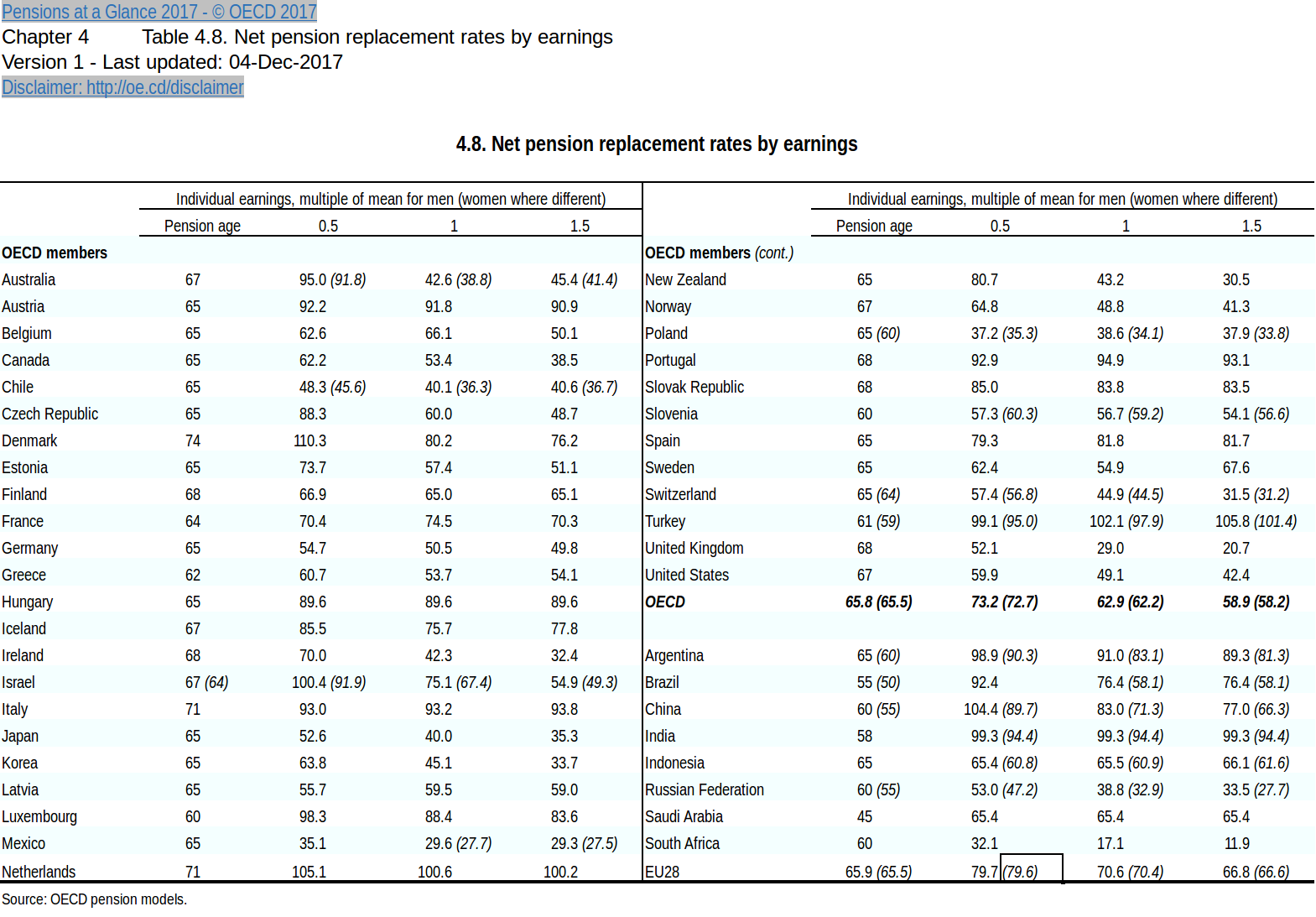 Average earners in The Netherlands indeed have an overall (state + other state-mandated schemes) pension that is, on average, higher than their previous net earnings. This is also true for low earners in Denmark, Israel, and China, as well as men in Turkey. The figure for average earners is 100.6% in The Netherlands and 29.0% in the United Kingdom. The next lowest figure is Mexico at 29.6%, but the Mexico figure only applies to men; women in Mexico have it worse at 27.7%, so whether the race-to-the-bottom is won by the UK or Mexico is unclear. Men in Turkey get 102.1% of previous net earnings (but women only 97.9%), so although the list does omit some countries, those omissions do not make the UK pensions look worse than they really are.

The report also has figure for some non-OECD countries, but none beat the UK (or Mexico) in the race-to-the-bottom, so there is no cherry-picking going on; just a (possibly accidental) misunderstanding on exactly what the numbers mean or a shortcut to use state pensions when they mean state-mandated pensions.

It would be more interesting to compare real overall pensions, rather than only the total state-mandated pension. I don't know what fraction of British employees opt-in to in-work pension schemes, but the OECD numbers are rather referring to a minimum for someone who doesn't opt in to anything optional, than an average reflecting the real situation (unless the aforementioned fraction is very very small).

Finally, one should remember that old-age financial well-being is not affected by pension income alone, but by many other factors, such as home ownership, rental income, other investments, debts, cost of living, rental subsidies (in absence of home ownership), funding for health and social care, as well as many other forms of direct or indirect support that government (or even charities) may provide.

Not the answer you're looking for? Browse other questions tagged economics united-kingdom welfare .

9
Did Roosevelt's New Deal Program Prolong the Great Depression?
23
Does the UK government have only 300 staff investigating tax evasion of £70bn+ vs 3250 staff investigating benefits (welfare) fraud of £1.2bn?
21
Does the Netherlands goverment fund 'Hookers for the Handicapped'?
16
Did the No. 303 Polish Fighter Squadron score the most kills in the Battle of Britain?
22
Does the U.S. government spend four times as much on welfare as it would take to eliminate poverty by giving the necessary cash?
9
Has freedom of movement of people lead to a reduction in wages and worsening of working conditions in the UK?
12
Are wages stagnant over the past 40 years in the USA?