Is drinking while standing unhealthy?

In Quora there is an answer that states:

Scientifically, drinking while standing lets water hit the lower part of the esophagus strongly, & by time this leads to a dilation and relaxation of the sphincter that connects the esophagus and stomach, which finally leads to a medical condition called "GERD: GastroEsophageal Reflux Disease"

Moreover it is forbidden, or at least advised against, in Islamic Law, and some scholars suggest that it is for health reasons.

Swallowing is how food and liquid normally move from the mouth to the stomach via the esophagus. It is initiated by a voluntary formation of a bolus (clump) of food and/or liquid and its movement to the rear of the mouth. That triggers an involuntary reaction that leads to the remainder of the swallowing reflex, including occlusion of the pharynx and larynx (protecting your breathing path) and presentation of the esophageal opening. Eventually, the bolus reaches the esophagus and is carried to the stomach via esophageal peristalsis.

The bolus does not fall down the esophagus; it is carried down the esophagus by waves of muscular contractions. The function of peristalsis is to "propel swallowed food or fluid into the stomach". (Patterson, 2006).

This video (gfycat) is an videofluoroscopy of swallowing and esophageal peristalsis. The content is a barium sulfate suspension. (Video from Patterson, 2006.)

The peristaltic velocity averages about 3 cm/sec in the upper esophagus, then accelerates to about 5 cm/sec in the mid-esophagus, and slows again to approximately 2.5 cm/sec distally.

That speed is affected by the viscosity and body position (among other things). 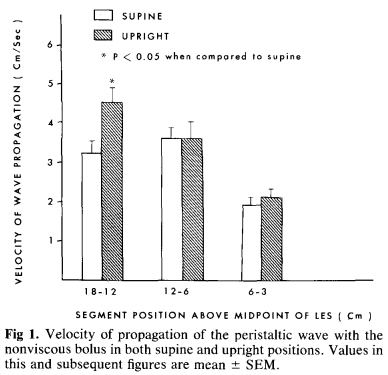 In their methods, "upright" meant seated and it was compared against supine (laying down).

I couldn't find any studies that showed that the speed of peristalsis differed between sitting and standing subjects.

Water doesn't hit any part of the esophagus. It is carried by the esophagus and in contact with it the entire time.

My review of GERD research (ref, ref, ref, and many others here) doesn't reveal any speculation that standing while drinking has any connection to the onset of GERD.

While it is possible that the claim (that standing while drinking leads to GERD) is true, the proposed mechanism isn't consistent with our knowledge of how swallowing works and I can't find any studies demonstrating or even speculating about the effect.

Not the answer you're looking for? Browse other questions tagged medical-science nutrition .