Does Victoria have the highest taxes, debt and power prices in Australia?

The Victorian Liberal leader Michael O'Brien in a Facebook post Makes the claim that the state of Victoria has the highest taxes, debt and power prices of all the states in Australia. Does this add up? 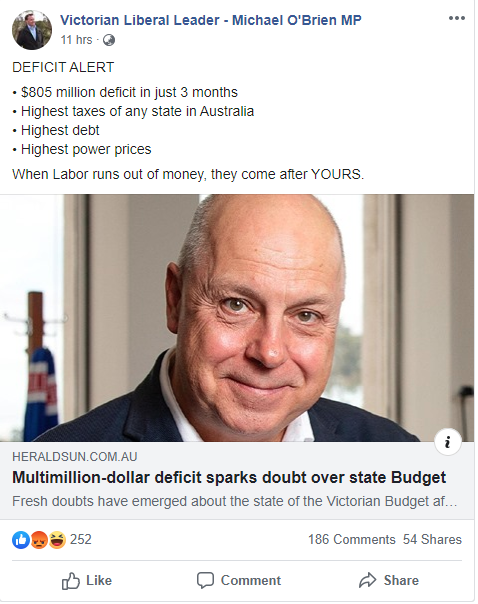 No, Victoria doesn't have the highest power prices in Australia. Not by a long way.

Yes, under the measure of proportion of the Gross State Product, Victoria did have the highest take in state taxes in 2017-2018 (which is what O'Brien referred to when first making the statement a year ago).

This statement is not so straightforward, though - state governments don't collect income tax, GST, nor fuel and alcohol duties. These are collected by the Commonwealth, with GST being redistributed to the state governments.

However, there are other taxes and levies, such as payroll tax (paid by companies), stamp duties on property sales, emergency service levies, which are set and collected by the state governments. There are also local government rates set by city and rural councils to provide services like rubbish collection.

According to the ABC, the Victorian state tax take did increase by 35% in the first four years of the current Labour government there. As a fraction of the state economy it collected 5.3% of its Gross State Product in 2017-2018, compared with 5.1% in New South Wales.

However, that year's take included a massive one-off port licence fee, which if disscounted from consideration means that Victoria and New South Wales were even.

Another complication is that mining royalties are not classified as taxes. NSW and WA both collected far more of these royalties than Victoria.

Finally, there are more than one way to assess tax burdens. The claimant prefers to use proportion of state economy (Gross State Product), but taxation per capita of population is much higher in NSW.

6
Is Australia the highest per capita emitter of greenhouse gases in the OECD?
5
Does any police/emergancy services department in the US/UK/Australia/Canada employ a Psychic Consultant?
6
Did a war memorial in Australia have a Japanese flag on the floor to trample?
9
Is the Australia Post CEO the highest paid postal executive on the planet?
12
Does the Jones Act double import prices in Puerto Rico?
2
Do many commonly consumed food items in Australia have the halal certification emblem on them?