Do most drug users not become addicted?

This 2015 Conversation article by Paul Hayes, former chief executive of the National Treatment Agency for Substance Misuse, claims that most users of illegal drugs do not become addicted:

Drug use is common, drug addiction is rare. About one adult in three will use an illegal drug in their lifetime and just under 3m people will do so this year in England and Wales alone. Most will suffer no long-term harm.

There are immediate risks from overdose and intoxication, and longer-term health risks associated with heavy or prolonged use; damage to lungs from smoking cannabis or the bladder from ketamine for example. However most people will either pass unscathed through a short period of experimentation or learn to accommodate their drug use into their lifestyle, adjusting patterns of use to their social and domestic circumstances, as they do with alcohol.

Is it true that most drug users do not become addicted?

Although he does not state it clearly, Hayes is working under a definition of addiction that is tied to societal outcomes, in contrast to mere physical dependence. Here's the contrast from NIH's "Principles of Drug Addiction Treatment" (3rd ed.):

Is there a difference between physical dependence and addiction? Yes. Addiction—or compulsive drug use despite harmful consequences—is characterized by an inability to stop using a drug; failure to meet work, social, or family obligations; and, sometimes (depending on the drug), tolerance and withdrawal. The latter reflect physical dependence in which the body adapts to the drug, requiring more of it to achieve a certain effect (tolerance) and eliciting drug-specific physical or mental symptoms if drug use is abruptly ceased (withdrawal). Physical dependence can happen with the chronic use of many drugs—including many prescription drugs, even if taken as instructed. Thus, physical dependence in and of itself does not constitute addiction, but it often accompanies addiction. This distinction can be difficult to discern, particularly with prescribed pain medications, for which the need for increasing dosages can represent tolerance or a worsening underlying problem, as opposed to the beginning of abuse or addiction.

In reality the likelihood of individuals without pre-existing vulnerabilities succumbing to long-term addiction is slim. Heroin and crack addicts are not a random sub set of England’s 3m current drug users.

Addiction, unlike use, is heavily concentrated in our poorest communities – and within those communities it is the individuals who struggle most with life who will succumb. Compared to the rest of the population, heroin and crack addicts are: male, working-class, offenders, have poor educational records, little or no history of employment, experience of the care system, a vulnerability to mental illness and increasingly are over 40 with declining physical health.

Problem cannabis use is less concentrated among the poor, but is closely associated with indicators of social stress and a vulnerability to developing mental health conditions.

Most drug users are intelligent resourceful people with good life skills, supportive networks and loving families. These assets enable them to manage the risks associated with their drug use, avoiding the most dangerous drugs and managing their frequency and scale of use to reduce harm and maximise pleasure. Crucially they will have access to support from family and friends should they begin to develop problems, and a realistic prospect of a job, a house and a stake in society to focus and sustain their motivation to get back on track.

So what Hayes is saying is that we measure poor outcomes in society as a result of drug taking... we will find most such outcomes among those with compounding societal disadvantages. A no-brainer, really.

But just considering marijuana in the DSM-5:

And using these criteria a large scale study in the US found:

Prevalence of 12-month and lifetime marijuana use disorder was 2.5% and 6.3%. [And broken down by severity:] 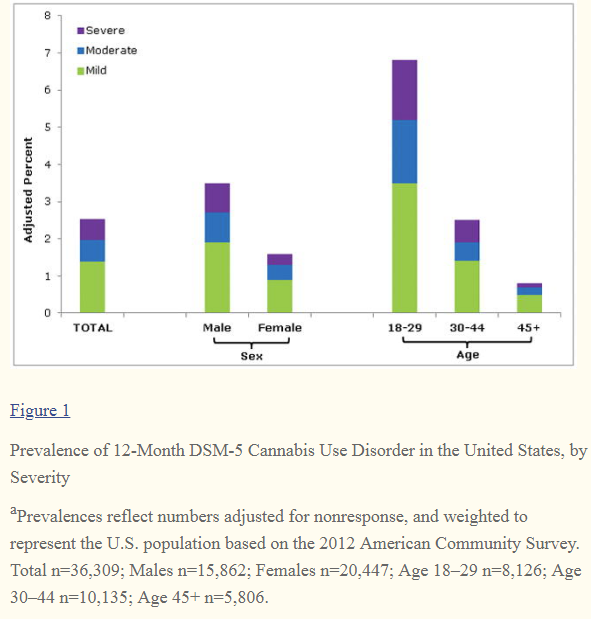 Given that more than half of US population admits/claims to have tried marijuana at least once, then it is indeed reasonably correct that addiction-like problems are rare for this often experimented-with drug. So Hayes' claim is easily true for marijuana. He is actually making somewhat stronger claims given that his examples include cocaine etc. (See the end of my post for cocaine.)

Actually the most dubious part in Hayes' claim is not the definition of addiction (which is fairly clear to me what Hayes' means), but "drug use". His comparison is just like the one I made for marijuana, i.e. "drug use" clearly means for Hayes "tried at least once in life". It's not too clear to me that this is a fair comparison, but this is the one he makes. If we defined a notion of "regular drug use" we might come up with a different conclusion regarding the prevalence of addiction. Or it might not even matter that addiction takes place or not for such users, who might experience other bad outcomes. At least one JAMA paper (2002) found that

long-term heavy cannabis users show impairments in memory and attention that endure beyond the period of intoxication and worsen with increasing years of regular cannabis use.

See also Does long-term marijuana use lead to a significant drop in IQ? (which mentions a more recent study.)

And while accepting "drug use" to be any single use, there's the matter of the time frame. For example, a NIH page 'Is marijuana addictive?' says

Recent data suggest that 30 percent of those who use marijuana may have some degree of marijuana use disorder.

And this is correctly (albeit a bit lacking in detail) reflecting the study it cites, which is a paper from the same group as one I pulled the graph from, and the using the same sample, but using the DSM-IV criteria since it wanted to do a comparision with a an older sampling point, before DSM-5 was adopted:

And what was the sample and how is "drug use" measured here?

The 2012–2013 NESARC-III is a nationally representative face-to-face interview survey of 36,309 adults aged 18 years and older residing in households and selected group quarters, with respondents selected through multistage probability sampling. [...]

In NESARC-III, past-year DSM-IV marijuana use (defined as any use, consistent with many studies) [...]

30% addiction-like to use ratio on a one-year timeframe is still reasonably consistent with Hayes' claim, but a lot higher than the proportion using a lifetime timeframe, which is about 12% [dividing 6.3% (from graph) to ABC's 52%]).

What may explain [some of] this difference when the time frame is changed? People remember drug use more consistently than they report their problems on the DSM criteria:

Test-retest reliability of 12-month and lifetime cannabis use was substantial (kappa=0.78, 0.77) in a general population sample. Test-retest reliabilities of DSM-5 cannabis use disorders (kappa=0.41, 0.41) and their dimensional criteria scales (intraclass correlation coefficients [ICC]=0.70, 0.71) were fair to substantial in a general population sample (N=1006).

So my bet is that when you expand the time frame from last year to lifetime, report of the addiction-like behavior becomes even less reliable.

The changes from DSM-IV to DSM-5 could also explain some of this, but apparently they weren't that impactful in the measures of "cannabis use disorder" prevalence:

And regarding cocaine (quoting from the last source):

In a study conducted among a sample of recently incarcerated correctional inmates, past year cocaine use disorder prevalence based on the DSM-IV was 12.7 percent, whereas the prevalence using DSM-5 criteria was 11.0 percent [47]. Notably, about 50 percent of inmates who met the DSM-IV criteria for cocaine abuse did not meet the DSM-5 criteria for cocaine use disorder [48]. The prevalence of this disorder was largely stable as a result of capturing more diagnostic orphans (individuals who met one or two dependence criteria and no abuse criteria). However, it is unclear how consistent these results will be for other stimulant types. [...]

Data examining the impact of the craving criterion addition are only available for cocaine. Peer et al. reported a lifetime prevalence of cocaine craving of 45 percent among adults in a high-risk, largely substance-using sample [25]. Compton et al. reported a past year craving prevalence among a nationally representative sample of 27 percent among adults who had used cocaine in the past year [30] 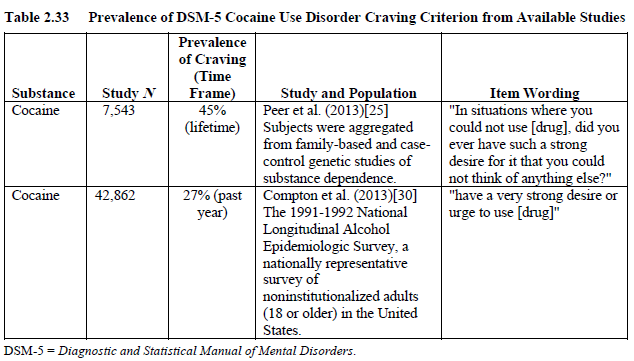 So even for cocaine you could say Hayes is mostly correct, as the amount of those who were diagnosed as cocaine abusers (a disorder removed in DSM-5) who also met the criteria for "stimulant use disorder" (which combines amphetamines and cocaine) in DSM-5 was 50% (in the single study on that issue). Also, the new DSM-5 craving criterion, while it scores pretty high among users of cocaine, was below 50%. But these are not negligible percentages, still being in the double digits.

It's actually a bit difficult to interpret & evaluate the final claim of Hayes quoted by the OP:

However most people will either pass unscathed through a short period of experimentation or learn to accommodate their drug use into their lifestyle, adjusting patterns of use to their social and domestic circumstances, as they do with alcohol.

If the "or" is taken as a Boolean-or, that makes the statement true just because most one-lifetime-use users don't become addicted, which is fairly easy to confirm. On the other hand if you also want to evaluate the statement whether the (more) regular users "learn to accommodate their drug use into their lifestyle"... that's a bit more tennous, but also a bit pointless since what does "accommodate" mean? He's not saying (for example) that there would not be any long-term negative health consequences for this sub-group. And if you take his analogy with alcohol... binge-drinking (an example of "accomodation", in my opinion) is classified as excessive drinking by the CDC, with associated wiht long-term health risks, like cancer.

You also don't appear to have linked to a claim from the British Drug Tzar, as you claim. However, since others, like Carl Hart and Maia Szalavitz have made similar claims in notable publications, I'll fact check, "do most drug users not become addicted?"

First, I'd like to note that as noted in the comments, there are a number of difficulties with ascertaining if this claim is true or not:

For these reasons, I'm only presenting the research I could find on this issue, which may not be a fully satisfactory answer. It would appear, from the evidence we have, that this claim is correct, by at least two standards.

Not the answer you're looking for? Browse other questions tagged recreational-drugs .

20
Does long-term marijuana use lead to a significant drop in IQ?

21
Kindergarten drug dealers
24
Do drug addicts stop maturing when they become addicted?
48
Does decriminalizing drug use lead to less drug use?
24
Is cannabis a gateway drug?
16
Can Marijuana use result in addiction?
20
Does marijuana impair driving?