Do drug addicts stop maturing when they become addicted?

Occasionally individuals and organizations that help drug users and addicts claim that addicts stop maturing when they become addicted to drugs:

Well, drugs and alcohol hinder a person’s brain function, especially that which controls critical thinking and reasoning skills. If a person;s [sic] mind is not capable of these things, they can not get a feel for life’s situations, gaining perspective, learning from mistakes and forming that wisdom gained from such things to use later on in life. Instead, they simply repeat the same mistakes, over and over in life, gaining little to nothing at all.

Addictions seem to stop a person from maturing. All they are left with is birthday after birthday, the physical signs of age, and limited knowledge or wisdom of that which is real life. It’s a sad thing to watch or even think about. Say a person’s addiction starts in their late teens to early 20s. By the time they are in their 40s, having abused drugs and alcohol for some many years, they still have the mental thought processes of the person they were 20 years before.

While this claim is generally made in reference to teenage drug abuse, it is often applied to addicts of any age, as shown above.

Is there any evidence support this claim? What criteria are used to decide when a person "stops maturing"?

I'm not positive on the definitive answer -- this may be very difficult to extract a causal relationship from in terms of the available literature.

From what I have found, many suggest that those who use drugs in the first place already have some difficulties/pre-dispositions to such usage. For example:

First, those electing to use cannabis were a high risk population characterized by social disadvantage, childhood adversity, early onset behavioural difficulties and adverse peer affiliations. Secondly, early onset cannabis use was associated with subsequent affiliations with delinquent and substance using peers, moving away from home and dropping out of education with these factors in turn, being associated with increased psychosocial risk.

We obtained data from 654 teenagers when they were in early and late adolescence and used it to evaluate resultant problems reported by this same group of youngsters when they were young adults. General, or polydrug, use increased drug and alcohol, health, and family problems... Alcohol use, which was not reflected in General Drug Use, had no specific negative effects, but it reduced loneliness in romantic relationships, self-derogation, and family problems.

Using its unique data base of 654 young adults who have been followed since early adolescences, the book assesses the effects of adolescent drug use on young adult family formation and stability, deviant behavior, sexual behavior and involvement, educational pursuits, livelihood pursuits, mental health, and social integration.

A study was conducted to explore the relationship between emotional intelligence (EI) and adolescent tobacco and alcohol use (TAU). Subjects were 205 multi-ethnic adolescents (52% male) from middle schools in southern California (mean AGE=12.63 years), 153 from a public school and 52 from a parochial school. An abbreviated version of the Multifactor Emotional Intelligence Scale... was used to assess the EI of the students. EI was negatively correlated with a general, overall measure of tobacco and alcohol use, and with individual tobacco and alcohol scales and items.

What does all of this amount to? I'm not quite sure, but I'd at least put forward the following as potential hypotheses:

I did find a study indicating that drug use may affect age-critical neurological development:

Frontal cortical development is later in adolescence and likely contributes to refinement of reasoning, goal and priority setting, impulse control and evaluating long and short term rewards. Adolescent humans have high levels of binge drinking and experimentation with other drugs. This review presents findings supporting adolescence as a critical period of cortical development important for establishing life long adult characteristics that are disrupted by alcohol and drug use.

So, these folks at least make the case that drug use may negatively affect a critical period in brain development and lead to negative outcomes. Toward the bottom of that article, they put forward this graphic: 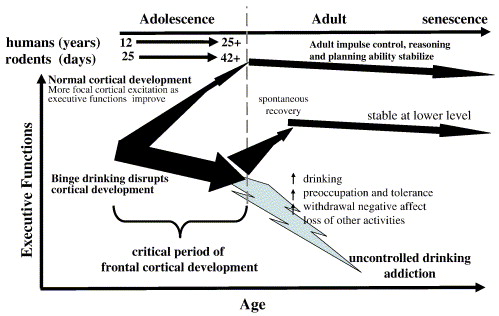 You can read the report at your leisure, but this model appears to suggest that heavy consumption disrupts development such that one stabilizes at a lower level than one who never experienced disrupted growth. Thus, this might support the idea that one stagnates for some time during addiction, or at least slows.

I'll conclude there -- I wish I had been able to find something more definitive. I may revise the answer if I get time to look into this from another angle which occurred to me: one could examine what contributes to increased maturity and see if drugs are used as an alternative or "escape" from such mechanisms, events. For example, perhaps the death of a loved one, dealt with among friends and families and long hard times of thought would bring about some quotient of maturity, while simply using drugs to "escape" would not be as beneficial. This is speculation at present, but it's another route to trying to answer this.

Lastly, it may be that addicts simply display less maturity and thus simply appear to have stunted their growth. From WIKI:

Addiction can also be viewed as a continued involvement with a substance or activity despite the negative consequences associated with it.

Thus, in the end, it may be tautological that an addicted person appears to not be maturing, since maturity is generally seen as shaping behaviors toward positive goals, avoiding detrimental consequences, appropriate action, etc. Addiction, by the definition, implies an immaturity of choice.

Hopefully I haven't clouded the waters too much.

Not the answer you're looking for? Browse other questions tagged psychology recreational-drugs .

5
Can smoking marijuana from a young age cause emotional immaturity?

29
Will people automatically look at the person they feel closest to when laughing?
25
Are people happier when they spend money on experiences rather than physical objects?
18
Do people feel indebted when they receive a free sample and are therefore more likely to buy?
16
Do most drug users not become addicted?