Recently one of my close relatives were diagnosed with terminal stomach cancer. An alternative medicine specialist recommended drinking distilled kerosene.

This appears to be a common therapy:

tl;dr- No, drinking distilled kerosene doesn't cure cancer as far as any modern research can tell. Some studies have suggested that it might cause cancer in some cases, though the general scientific opinion hasn't found a strong connection between kerosene and cancer under typical conditions.

There's been a lot of research looking for cancer-causing compounds, i.e. carcinogens. Research in this area seems to conclude that kerosene exposure is mostly unconnected to cancer. While I haven't found a reference that explicitly claims that kerosene doesn't cure cancer, presumably this would be noted if such an anomalous result was found.

Pretty much all sources seem to agree that kerosene is toxic and shouldn't be ingested. The primary concern seems to be about kerosene inhalation, which can occur due to aspiration following ingestion. Other sources have noted that kerosene may cause cancer on prolonged skin contact. Finally, it's worth noting that kerosenes are a huge mixture of many different compounds, some of which are believed to cause cancer.

Regarding carcinogenicity, some studies have pointed toward increased cancer rates in connection to kerosene exposure, though most sources seem to conclude that the potential connection is weak:

An excess of lung cancer was seen in a large cohort of Japanese workers exposed to kerosene, diesel oil, crude petroleum and mineral oil [29]. In another Japanese study, an excess of stomach cancer was observed amongst workers possibly exposed to kerosene, machine oil or grease [29]. Three case-control studies found an association between lung cancer and the use of kerosene stoves for cooking amongst women in Hong Kong; however, no distinction was made between exposure to kerosene per se and exposure to its combustion products [29]. Given that such studies could not attribute the effects to a particular chemical, the IARC evaluated mid-distillate fuel oils as being “not classifiable as to their carcinogenicity to humans (Group 3)” [29]: there is “inadequate evidence” to classify kerosene as a human carcinogen and “limited evidence” for the carcinogenicity of kerosene to experimental animals.

Surveying a bunch of sources, I found a few that claimed that kerosene might cause cancer, though most seem to claim that there's no apparent connection with cancer.

Despite the apparent lack of carcinogenicity, kerosene poisoning still has other problems. "Hydrocarbons Toxicity Treatment & Management" (2015) discusses research on how to treat kerosene ingestion. Most of the concern seems to be related to avoiding aspiration.

If you do enough random testing, you'll find studies all over the place. I found one study that seems to report a ~15% decrease in apparent cancer rates (25 observed malignant neoplasms vs. 29.4 expected) for one group of men who had exposure to kerosene fumes:

3.3 Epidemiological studies and case reports of carcinogenicity to humans

A cohort of 2182 men exposed to jet fuel in the Swedish armed forces was established in 1974 (Seldén & Ahlborg, 1986). Most of the men (86%) were employed in the Air Force, where exposure had been primarily to aviation kerosene, jet fuel, isopropyl nitrate (a starter fuel) and aviation gasoline (for piston engines). Measurements of jet fuel in air at some work places in 1975 and 1976 showed concentrations exceeding 350 mg/m3. Cancer morbidity and mortality in the cohort were followed until 1981 and 1982, respectively, in central registers, with loss to follow-up of less than 0.2%. For Air Force personnel, there was significantly lower total mortality than expected on the basis of national rates (44 observed, 81.1 expected), due to low mortality from cardiovascular diseases. There were 25 malignant neoplasms compared with 29.4 expected. No clear increase in the frequency of cancers at specific sites was seen, even when duration of employment, latency, occupation or type of exposure were taken into consideration. These results were confirmed when the follow-up was continued for a further two years (Seldén & Ahlborg, 1987). (The Working Group noted the short duration of follow-up.)

Obviously the study referenced above was very weak and far more likely explainable due to other factors, but since it happened a long time ago, people who heard it or studies like it may've jumped to conclusions that didn't pan out.

Kerosene isn't a simple chemical, so samples of kerosene can have significant variation in content. This makes it relatively difficult to discuss compared to chemicals that always have the same composition.

In short, kerosene's like gasoline or diesel. It started out with ancient plant/animal life dying and turning into fossil fuels, which is then pumped out of the ground as crude oil. Crude oil is then split via fractional distillation, where it's boiled in a series of stages, each time at a lower temperature, until it ceases to boil. 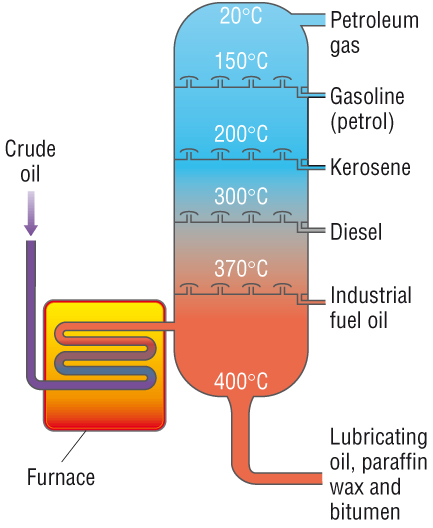 So, kerosene's a bunch of decayed organic matter that has a boiling point between 150°C and 275°C. Its exact composition will depend on what the crude oil had in it.

Regardless of crude oil source or processing history, kerosene's major components are branched and straight chain alkanes and naphthenes (cycloalkanes), which normally account for at least 70% by volume. Aromatic hydrocarbons in this boiling range, such as alkylbenzenes (single ring) and alkylnaphthalenes (double ring), do not normally exceed 25% by volume of kerosene streams. Olefins are usually not present at more than 5% by volume.

Kerosene's entry with the CDC describes it as:

Some components in kerosene are classified as carcinogens

It's worth noting that some of the components in kerosene are classified as carcinogenic. Presumably kerosenes that have large concentrations of carcinogenic compounds would also be carcinogenic, though I'm not aware of any publicly available database that lists detailed breakdowns of kerosenes by the carcinogenicity of each component.

Not the answer you're looking for? Browse other questions tagged cancer medications .

12
Dichloroacetate (DCA) as a cure for cancer
49
Does regularly drinking from a plastic container cause cancer?
19
Does soursop cure cancer?
14
Do lemons help cure cancer?
107
Has the cure to cancer been hidden by pharmaceutical companies?
4
Does drinking black tea increase prostate cancer risk?
27
Does Frankincense cure cancer?