Does Shell get $2 billion a year in subsidies from the US government?

While browsing reddit, I saw the following graphic from the Late Stage Capitalism subreddit: 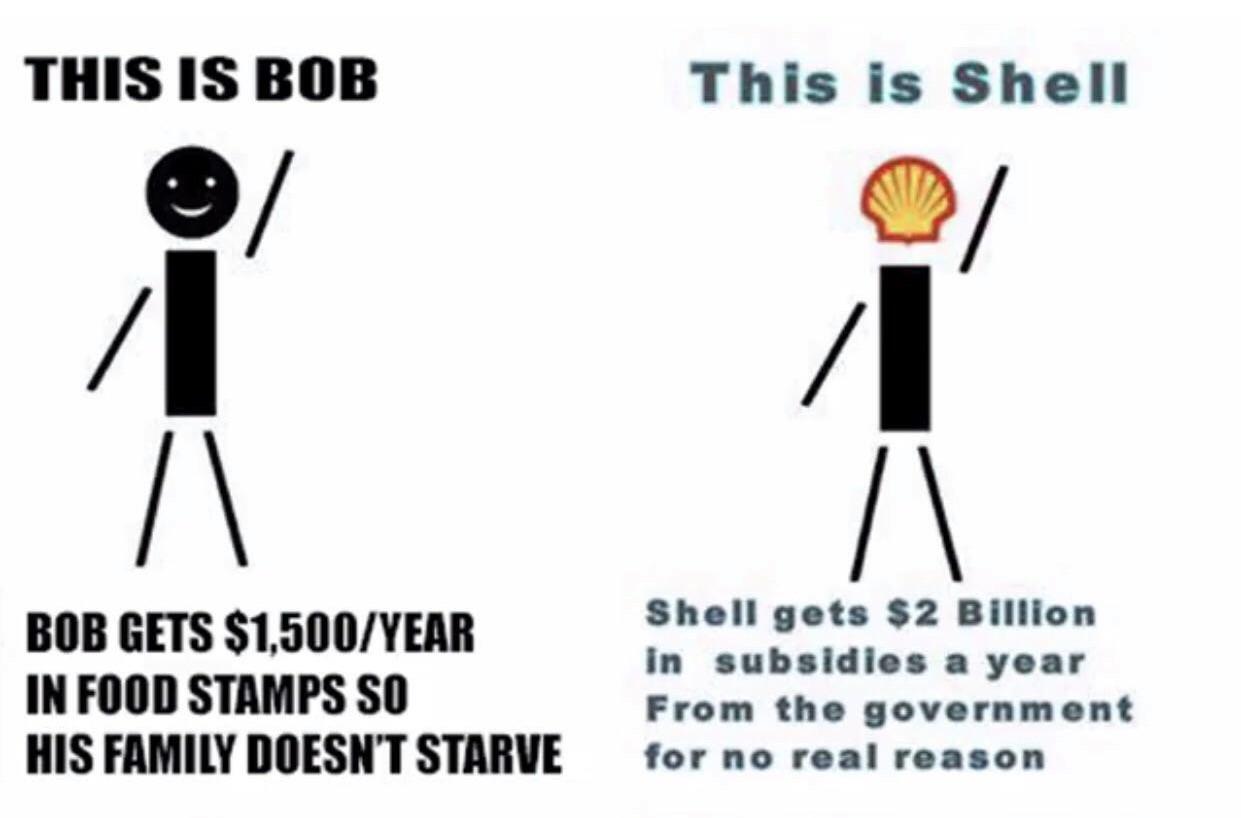 (Two stick figures are shown, the second one with Shell's logo for a head)

This is Bob.
Bob gets $1,500/year in food stamps so his family doesn't starve.

This is Shell.
Shell gets $2 billion in subsidies a year. From the government for no real reason.

I did a little internet searching and unsurprisingly there appears to be a lot of controversies around how oil companies receive tax breaks or subsidies. A lot of the debate seems to be focused on the semantics of the issue(s).

Does Shell get around $2 billion a year in US government subsidies as the graphic suggests?

The infographic is false. Shell does not receive $2 Billion in subsidies a year. They do receive tax breaks, but not for "no real reason".

The $2 Billion claim in the infographic seems to be either a misrepresentation or a misreading of values found on some websites online. An approximate value of $2 Billion for Royal Dutch Shell has been presented on mic.com, cheatsheet.com, The Washington Post, etc. However, this amount is for total tax subsidies received since 2003, as mic.com put it.

Royal Dutch Shell has managed to nab over $2 billion in subsidies since just 2003 alone.

This is backed up by the supposed source of the mic.com article, Good Jobs First, who self describe in their About Us page as

[A] national policy resource center for grassroots groups and public officials, promoting corporate and government accountability in economic development and smart growth for working families. We provide timely, accurate information on best practices in state and local job subsidies, and on the many ties between smart growth and good jobs. Good Jobs First works with a very broad spectrum of organizations, providing research, training, communications and consulting assistance.

Good Jobs First, among other things, serves as a watchdog for government subsidies, and maintains a database of subsidies and tax bonuses awarded to companies. Of note is the page for Royal Dutch Shell. There are four things of major note on this page.

This is futher backed up by an article on Mother Jones. In the article, they estimate approximately $200 million in tax subsidies for RDS. However, there is no source for their estimate.

Even though OP did not ask about the "no real reason" portion of the image, I've elected to at least address it. While "no real reason" is a subjective statement, the majority of tax write offs for RDS (and "Big Oil" companies as a whole) are not something exclusive to the Oil Industry. David Blackmon, writing for Forbes in an article entitled Oil And Gas Tax Provisions Are Not Subsidies For "Big Oil"

Basically, Percentage Depletion is the oil and gas industry’s version of a depreciation deduction for its main asset, which is the oil and natural gas in the ground, commonly known as its reserves. Every industry of any kind is allowed a depreciation deduction on its assets under the U.S. Tax Code, but, far from being a “subsidy” for “big oil”, this tax treatment was in fact repealed for all integrated oil companies, i.e., ExxonMobil, Shell, BP, etc., in 1975, and is today available only to independent producers and royalty owners.

Another great example of the specious mischaracterization of these tax treatments is the Manufacturer’s Tax Deduction, more commonly referred to as Section 199. The Section 199 provision was enacted by congress in 2004 as a means of encouraging manufacturers to relocate overseas jobs to the U.S., and is in no way specific to or limited to the oil and gas industry. In fact, the oil & gas industry’s ability to take advantage of this provision has already been singled out for limitation – in 2008, Congress reduced the industry’s deduction under this provision to 2/3rds of what other manufacturing industries are allowed to deduct.

Finally, let’s talk about Intangible Drilling Costs (IDCs), another feature of the federal tax code that will enjoy its’ 100th birthday in 2013. Basically, IDCs are the costs incurred by the oil and gas industry in the drilling of its wells. Since drilling wells is the only means of finding oil and natural gas, IDCs essentially amount to what any other industry would be able to deduct as a part of its cost of goods sold, a concept of accounting and tax law as old as the tax code itself.

Independent producers and royalty owners are allowed an election to either a) expense these costs in the year they are incurred, or b) amortize them over a 5-year period. Again, most media reports commonly characterize this as a “subsidy” for “big oil”, as does the Obama Administration. The truth is that “big oil” – the ExxonMobils, Chevrons, Shells and BPs of the world – benefit much less from this tax treatment, it having been severely limited to them by congress in 1986, and again in 1992. And the truth also is that IDCs are not a “subsidy” to anyone engaged in the oil and gas business.

The number in your claim appears to come from a 2014 report by a "subsidy tracking group" called Good Jobs First, quoted in an article in "cheatsheet.com" about corporate welfare recipients. They said:

But they did not say "per year". It seems to be a total.

Something crucial to keep in mind when you read about this issue, whether my answer or anywhere else: the answer to your question depends on your definition of "subsidy". Do you include tax breaks? Exemption from price controls or allowed rates of return? Exemption from paying royalties for using federal lands?

People trying to justify these subsidies answer "no" to most of those questions. People outraged by them answer "yes". What's the right answer? I don't know, but be aware that definitions control the debate.

19
Are big corporations the biggest beneficiaries from farming subsidies?
9
Does "Obamacare" require the disclosure of medical records to the government?
9
Has the US Government tagged people to be killed with stickers on the mailboxes?
57
Can the US government garnish 100% of your income?
16
Does the fossil fuel industry benefit from trillions of dollars of subsidy from governments every year?
82
Is the US federal government still paying Civil War survivor benefits?
13
Does an American taxpayer fund $870 in corporate subsidies for every $36 in food stamps?
12
Does the Inflation Reduction Act increase taxes on people making less than $10,000 / year?