Does an American taxpayer fund $870 in corporate subsidies for every $36 in food stamps?

I recently saw this Occupy Democrats claim on Facebook: 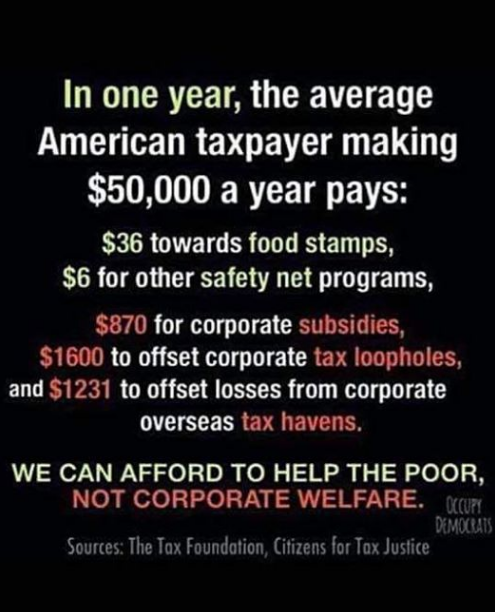 Now, obviously a lot of those categories are vague and open to interpretation (I've known people who would argue most of the U.S. defense budget is "corporate subsidies"), but are any of these claims true with even vaguely-reasonable definitions?

I couldn't find it on the websites of Occupy Democrats or the two sources cited in the image.

The last three numbers seem to be based on the same data as this Common Dreams article:

Note that this double counts corporate tax subsidies as corporate subsidies and tax loopholes based on the figures from two different sources. It should be either $870 or $1600, not both.

That source doesn't use a $50,000 family. The values are calculated by dividing the total cost by the number of households.

It's also questionable whether the average taxpayer "pays" taxes to offset any of this. The federal government external deficit in 2012 was over $1 trillion. Even if they could somehow collect this amount of money, it still wouldn't have offset the deficit that year.

I didn't find a real reference for the food stamp numbers. Here is a forum post that seems to link to an article. But the article is gone and does not appear on archive.org. I suspect that that was the original source, as the numbers and description match. But without the article, it's hard to evaluate it. Perhaps there is a paper archive of a newspaper that could be checked if someone knew what newspaper used the examiner.com domain.

For safety net, I would just point out that federal spending on Medicaid was $629.3 billion in 2018 and $431 billion in 2012. That's considerably more than the food stamp number, suggesting that they weren't including it in their other safety net number that is smaller. Ignoring the single largest program does not bode well for their other numbers.

Not the answer you're looking for? Browse other questions tagged united-states taxes .

12
Were terror attacks proposed to gain political support for a war against Cuba?
12
Does every major pipeline in the US cut through Native American lands?
13
Does the USDA burn food every week?