Are big corporations the biggest beneficiaries from farming subsidies?

I've heard that big companies are the biggest beneficiaries of agricultural subsidies (in the US and other western countries). This would to me seem to be the opposite of the intention of those policies, and I'd like to know how true this statistic is.

I'm unsure of where to find this for other countries, but I was able to find THIS report from the Government Accountability Office. The report may be a bit dated (2001, so 10 years old), but in looking through the first part alone, I see nothing but tables and charts showing that big farms receive more subsidy payments than medium or small farms.

Skimming aside, the report quite clearly states:

...the 7 percent of farms nationwide with gross agricultural sales of $250,000 or more— received about 45 percent of the payments.

As Lennart pointed out though, larger farms are, by definition, producing more crops. Subsidies (unsure of units, but say payed per volume or weight), therefore, would be paid in higher proportion to those producing more goods.

I did find the chart below, which suggests that small farms may actually be getting more payments per value of their establishments compared to large farms: 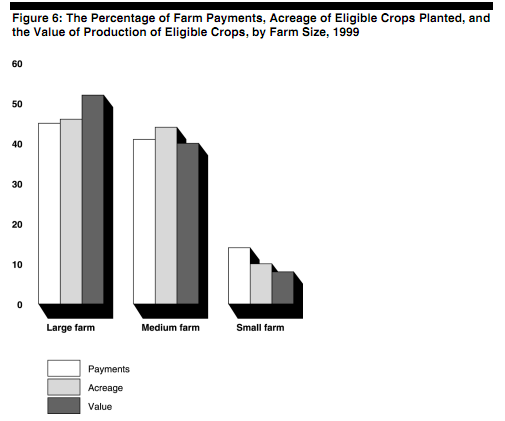 This bit preceded that table:

I was actually curious about this, wondering if large farms received a proportional payment per volume of crop compared to small farms. It seems that they actually receive less by value than small farms!

The report does give some explanations for the smaller payments to smaller farms, one being the obvious one already mentioned that larger farms produce more product. Another, however, was based on the type of goods typically produced by the farm sizes:

...beef is not one of the commodities for which farm payments are generally made. According to the Economic Research Service officials, beef is the primary commodity of about 40 percent of small farms, compared to 20 percent of medium farms and 10 percent of large ones.

So, small farms are substantially more targeted toward a non-subsidized product compared to their larger counterparts, and thus aren't receiving subsidies for those goods.

It would be great to see more current data on this topic, as the intro to the report states (addressed to the Chairman of the Committee on Agriculture at the time):

...Concerned that farm payments are not being effectively targeted to aid the survival of small farms and the entry of young people into agriculture, you asked us to (1) determine the distribution of farm payments over the past decade by farm size, operators’ age, state, and crop and (2) identify the major barriers that make it difficult for young people to enter farming.

This leaves me wondering what the results were -- were the findings that the situation at the time was fair, or was action taken to rectify anything, have payment distributions changed much in 10 years, etc.? If I find answers to these questions, I'll update the answer to include them!

Not the answer you're looking for? Browse other questions tagged government .

8
Are media reports about squatters' rights accurate?
26
Does Texas have the right to secede from the United States?
18
Did the FBI not require assistance from Apple to unlock the San Bernadino terrorist's phone?
6
Did the amount of bureaucrats increase in the immediate aftermath of the Soviet Union?
75
Does Shell get $2 billion a year in subsidies from the US government?
16
Does the fossil fuel industry benefit from trillions of dollars of subsidy from governments every year?
7
Is "US Military Intelligence report EW-Pa 128" real?
5
Are the "DHSC Communications Team" using bots to flood social media with posts showing NHS workers supportive of government policy?