Does China have motorways with 50 lanes, or at least with 20?

An article from the Daily Mail reports about a giant traffic jam near Beijing, China, in the aftermath of 2015's national holiday week.

Several times, the article insinuates at least a section of the motorway has as many as 50 lanes:

No end in sight: The incredible gridlock took place on one of the country's busiest and widest highways with as many as 50 lanes

The jam began at around 2pm just outside the capital city on the G4 Beijing-Hong Kong-Macau Expressway, which has 50 around lanes.

Furthermore, the article then states:

The congestion was caused by a new checkpoint at the other side of the toll, which reduced the width of the road from 50 to less than 20 lanes.

This sounds like 50-ish lanes is the regular width of a part of the motorway, at least between a pair of very frequented entrances/exits. Alternatively, even if the 50 are not correct, the highway seems to regularly have 20 lanes.

Now, I see several clues that cast doubt on this claim:

Therefore, my question is: Does any part of the the G4 expressway (or any other Chinese motorway) indeed have a regular (i.e. not just around a checkpoint) width of 20, or even 50 lanes?

The article refers to the northbound Zhuozhou Toll Gate at the G4 motorway just south of the Beijing city boundary.

As you can see on the aerial photography from Google Maps, at this location, the G4 motorway has 8 lanes (4 in each direction):

If you consider an overhead image of the area that was jammed: 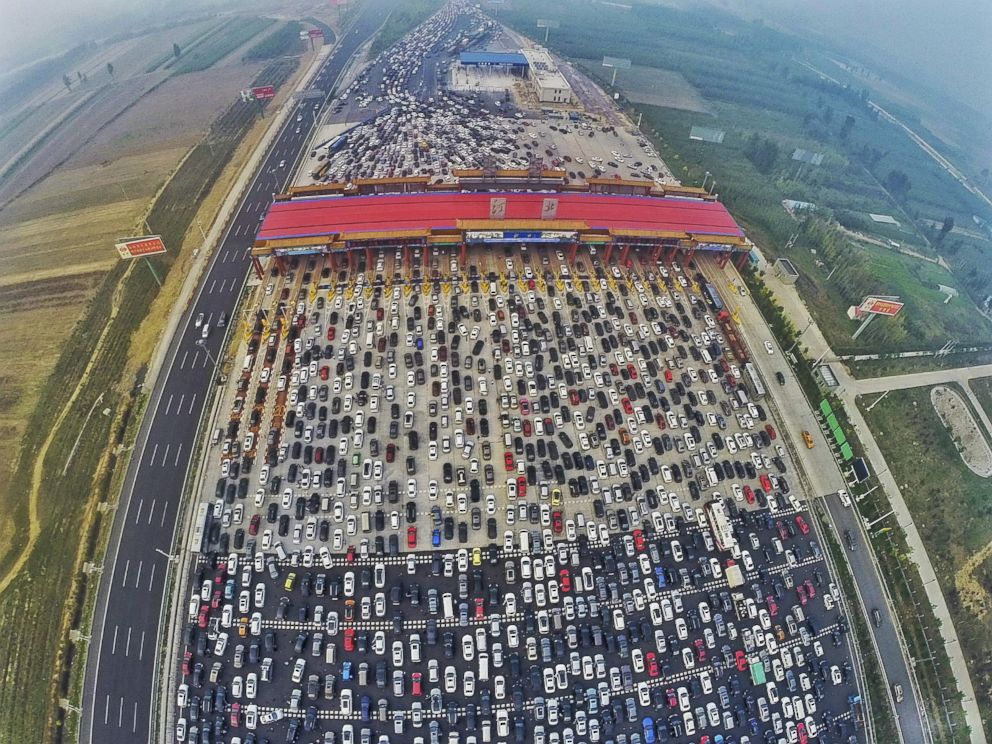 You can see that there is far more than 1 car per lane in the plaza. In fact I'm counting 50 cars across which may be where that number came from.

If we look at the images from Google Maps that Tor-Elinar Jarnbjo provided, we can see that there are:

If you look 500m up the road, there is a plaza for traffic coming from the other direction. There are:

Altogether this adds up to 60 lanes. If you only count the toll plazas that is 50 lanes. This could also be where the 50 lane number comes from.

However, outside of the plaza there are somewhere between 8 and 11 lanes depending on if you count the service lanes or ramps.

4
Is the Katy Freeway the widest in the world?

12
Does China have the death penalty for spammers?
13
Does China plan to launch artificial moons?
80
Have China and India more than doubled carbon emissions since 2000 while U.S. emissions have fallen?
8
Does China force US companies to hand over technologies?
5
Does China censor online discussions of female orgasms?
7
Will China soon have a bigger navy than the USA?
9
Did China have (or report) zero deaths from Covid-19 in 2021?
50
Are roundabouts actually statistically safer than traditional traffic patterns?