Do the Huichol of Mexico tie rope around the father's testicles during birth?

Gathered from the Internet:

Members of the Huichol tribe in Mexico view childbirth as a time of great pain and pleasure that must be shared by both men and women.At the time of childbirth, the fathers balls are tied and the mother can pull them.

This image inevitably accompanies the text: 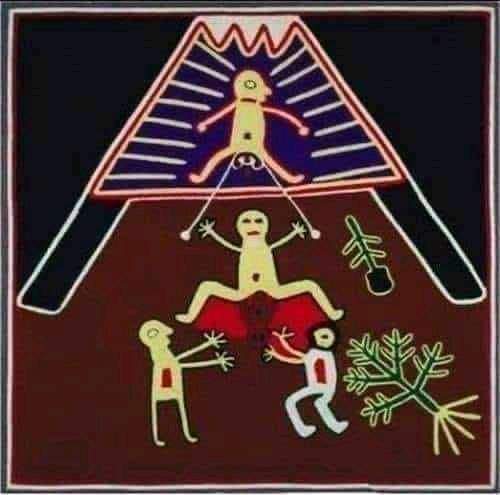 However, other netizens claim that this claim is derived from a "spiritualist" named Adele Getty and that Huichol women give birth alone. So, a trio of questions:

The work of art is The Husband Assists in the Birth of a Child by Guadalupe de la Cruz Rios (a Huichol), painted some time between 1960 and 1974.

The painting is inspired by Ramon Medina Silva.

The painting is owned by Fine Arts Museums of San Francisco.

Older references say the title is "How the Husband Assists in the Birth of a Child" and that the artist was the widow of Ramon Medina Silva.

According to American Indian Art Magazine (2000):

In this work, perhaps the first feminist yarn painting, Lupe originated one of the most popular yarn painting themes — the woman giving birth. It shows the man in the rafters of a house with a cord tied to his testicles. As the woman goes into labor, she pulls on the cord "so that her husband (can share) in the painful, but ultimately joyous experience of childbirth" (Berrin 1978:162)

Among the Huichol Indians of Central Mexico, a father would climb into the rafters with a rope tied around his scrotum -- to be pulled by the mother while she delivered: Together they shared the pain and ultimate joy of childbirth.

The 1978 Kathleen Berrin (editor) reference, Art of the Huichol Indians mentioned above has a black and white depiction of the artwork and says:

According to Huichol tradition, when a woman had her first child the husband squatted in the rafters of the house, or in the branches of a tree, directly above her, with ropes attached to his scrotum. As she went into labor pain, the wife pulled vigorously on the ropes, so that her husband shared in the painful, but ultimately joyous, experience of childbirth.

Page 311 footnote 8 of Huichol Women, Weavers, and Shamans disagrees with Berrin's statement that this was an actual tradition:

The caption on a yarn painting depicting childbirth published in Art of the Huichol Indians (Berrin 1978:162, pl. 25) refers to a supposed birthing tradition ... Neither Eger Valadez nor I have heard of such a couvade-like tradition or of a myth pertaining to it. However, Peter Furst (personal communication 1995) has suggested to me that the tradition might be based on an old but now only dimly remembered trickster tale that he heard from Ramón Medina, which has to do with the sexual misadventures of the culture hero and divine messenger Kauyumarie, when he was still “half-bad.”

Not the answer you're looking for? Browse other questions tagged pregnancy childbirth native-americans .

2
Does the EPI-NO device prevent perineal injury during childbirth?
12
Does marriage between first cousins double the risk of birth defects?