Will putting a car remote under your chin increase its range? 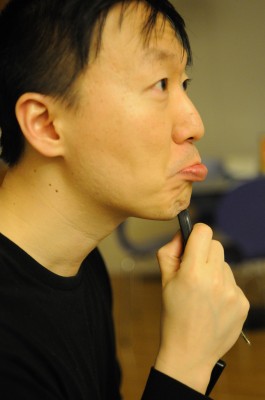 I've heard this before and anecdotally have thought I've experienced it working, but I thought I'd ask here. Many years ago, someone told me that putting a car remote (unlock/lock/alarm/auto-start) under my chin would increase the effective range and let me control the car from distances that would not work otherwise. It's pretty easy to find others saying the same (SOURCE):

If you too far away [sic] from your car and the remote doesn’t lock ro [sic] unlock your doors, try to stick it under your chin and will reach much further. This simple trick can make the difference between having to walk back to your car or stay comfortably where you are.

From the blog which was the source of the picture (link above):

Now one neat trick I knew is that if the car is just out of range of the remote, putting it under your chin while pressing the button will give the remote an extra boost, as your skull will act as an antenna and give you an extra few yards of slack.

Question: Will placing a remote under one's chin increase its range?

Bonus: If so, is the mechanism known?

First off, this is a great question. I've heard many people claim this is true, though not having a remote keyless system, haven't had a chance to do it myself. Looking it up online, there's virtually no "official" information about why this works. I'm going to list the most credible sounding reasons/sources I could find, explain why I think they're partially right, and then propose a mechanism.

Everything these three sources put forward is mostly correct. Your body does indeed act as an extended antenna, and that's why contact and body position can help clarify the signal on a radio or TV (or any) antenna. But that's receiving. When transmitting, there are a few items of importance: antenna shape, antenna orientation, and transmission power. Transmitting a more powerful signal would be the easiest way to overcome all of these issues - a bigger battery for the key fob would mean a stronger, longer signal, and that's all.

But that's usually not a simple option, so we work at optimizing the orientation. What most people talking about this issue seem to forget is, as long as you're holding the fob, you're part of the antenna. Touching it to your head is just changing the overall orientation, not suddenly turning you into a magic instrument - you're always an antenna. Does putting your head against a set of rabbit ears work better than adjusting with your hand?

As a slight aside, the whole changing capacitance idea makes no real sense. One only has to look at the equation posted above to see why (ironic that it was posted as a reason that it does make sense). Frequency is inversely proportional to capacitance (since C is in the denominator of that equation, a larger capacitance = larger denominator = smaller frequency), so as capacitance increases, frequency decreases. If the transmitted frequency changes too much, the receiver just won't receive any signal, since it's no longer looking for the "right" broadcast. Designers had to have had this in mind, so it's really doubtful that by touching the fob or the key you're really changing much at all about the inherent transmission properties. Again, what matters is orientation... one part of the body over another shouldn't really make a difference (re: the first quote, if liquid is the mechanism, your head definitely doesn't have more liquid in it than, say, your torso).

I'm betting what's likely here is a kind of pseudo-confirmation bias. You're expecting it to work when you hold it to your chin or temple or wherever, and you see that it does, so that's it. But it's pretty clear that people are doing this outside on the street or in parking lots where many variables are unaccounted for rather than in any kind of controlled environment. If it stops working at hip level but then works against the chin, that's all well and good, but you've only done the test in one of 360 directions. Ten feet over it might work just as well in the original orientation.

I think the best explanation is that it's a combination of height and directionality. The higher you hold the fob, the longer the transmission can go. The receiver's location on various car models is bound to differ, but by holding the transmitter higher up, there's far less chance of obstructions interfering with the signal. Same reason radio towers are tall or on top of tall buildings/land formations. And by holding the fob against your head, you're unwittingly creating a transmitting loop antenna with your arm and body (far larger than the tiny circuit loop antenna inside the fob), so this is probably helping as well (holding on chin vs. temple will alter the directionality by 45°, further changing efficiency depending on where your car is).

Untested, but if you try holding your keys a la He-Man and saying "I HAVE THE POWER," you might get the best results yet.

29
Will freezing your hard drive help recover its data?

7
Does putting a reflective screen inside your car against the windshield have a meaningful impact on internal temperature?