Is Amazon copying sellers' items and then selling their own versions instead?

This meme is being shared on social media: 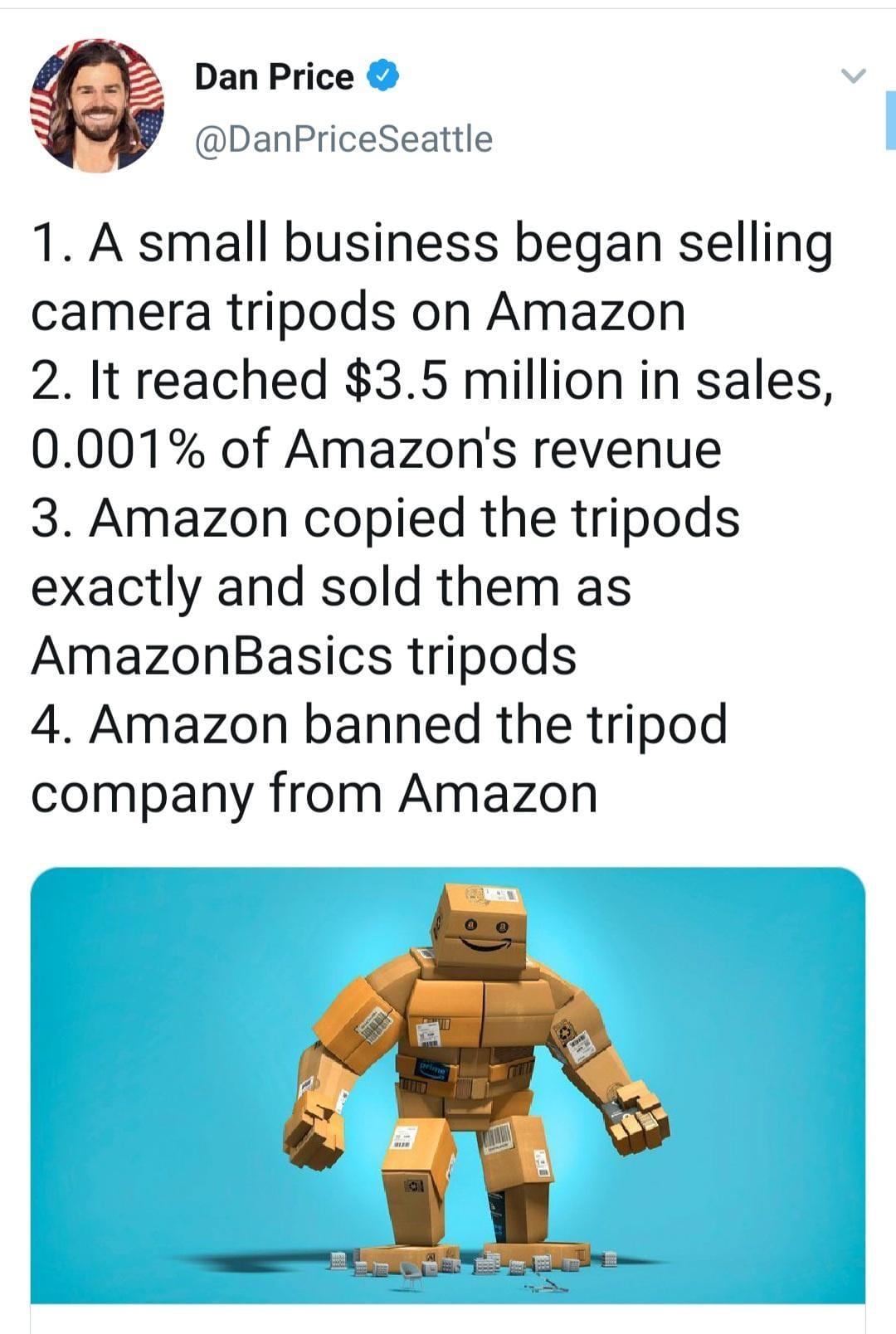 Source is the Wall Street Journal:

At its height about a decade ago, Pirate Trading LLC was selling more than $3.5 million a year of its Ravelli-brand camera tripods—one of its bestselling products—on Amazon, said owner Dalen Thomas.

Amazon priced one of its clone tripods below what Mr. Thomas paid his manufacturer to have Pirate Trading’s version made, he said. He determined it would be cheaper to buy Amazon’s versions, repackage and resell them than to buy and sell them on the terms he had been getting; he decided not to do that.

Amazon suspended Pirate Trading camera tripod models that competed with the AmazonBasics versions repeatedly, Mr. Thomas said, alleging his tripods had authenticity issues. Amazon rarely suspended the tripod models that didn’t compete with AmazonBasics versions, he said. In 2015, Amazon suspended all Ravelli products, he said, and even though the suspension ended, his company’s tripod business is now a fraction of the size it was. Mr. Thomas said he found being a seller on Amazon too risky and has largely pivoted to real-estate investing.

I have not found anything involving litigation so this does not appear to be off topic due to current events, but it does seem an odd claim. On face value this is fraud/antitrust, and it seems strange that they would get away with it without any previous attention.

I'm not sure how this is a surprising claim at its core. The press has been reporting that Amazon has been doing this for years, e.g. Bloomberg in 2016: 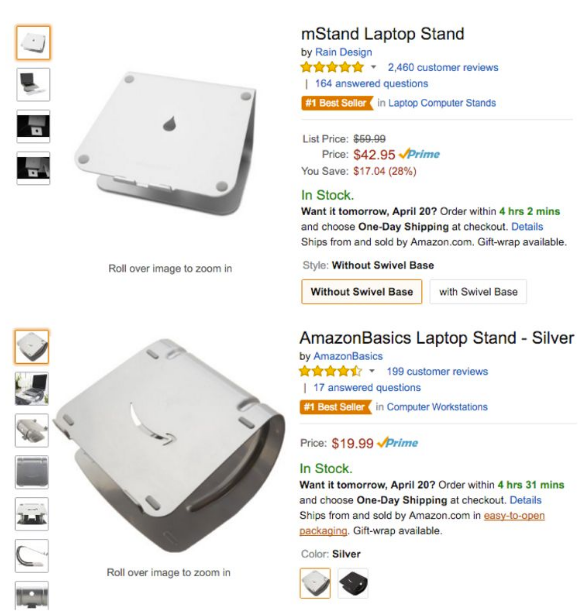 Rain Design has been selling an aluminum laptop stand on Amazon.com Inc. for more than a decade. A best-seller in its category, the $43 product has a 5-star rating and 2,460 customer reviews.

In July, a similar stand appeared at about half the price. The brand: AmazonBasics. Since then, sales of the Rain Design original have slipped. “We don’t feel good about it,” says Harvey Tai, the company’s general manager. “But there’s nothing we can do because they didn’t violate the patent.”

Rain Design’s experience shows how Amazon is using insights gleaned from its vast Web store to build a private-label juggernaut that now includes more than 3,000 products -- from women’s blouses and men’s khakis to fire pits and camera tripods. The strategy is a digital twist on one used for years by department stores and big-box chains to edge out middlemen and go direct to consumers -- boosting loyalty and profits. [...]

As the story says, the strategy is also employed by "brick and mortar" large retail chains with their "store brands" (aka "private labels"), and they've done that well before Amazon. And no surprises in that respect either:

most store brands in mass categories such as processed foods, personal care and home care are “me-too” products

A 2019 Engadget story which discusses more examples, also points to another story on their site that the EU is/was apparently investigation Amazon for anti-competitive behavior in this regard:

A statement issued by the EC says that based on its preliminary fact-finding, "Amazon appears to use competitively sensitive information about marketplace sellers, their products and transactions on the marketplace." Indeed, the EC has been in consultation with Amazon's independent sellers since September of last year, with many complaining of counterfeiting and product copies, which they believe has harmed their businesses.

The EU has more recently been discussing adopting some new laws/regulations to limit such behaviors, but I'm not very familiar with the details. Actually, in that story it's mentioned that in Nov 2020 the EU charged "Amazon with breaking competition law" even under current laws, and the complaint seems to include this issue:

What is Amazon accused of doing?

Amazon is accused of using data from those independent sellers to assess shopping patterns and the latest trends.

Thus use of data gives Amazon an unfair advantage and distorts competition, the EU probe found.

According a 2018 NYT piece which is quite extensive, Amazon is less likely to fall foul of US laws and regulations in this regard because:

At least since the 1970s, courts have been very skeptical of antitrust plaintiffs who can’t show that the challenged conduct would cause prices to go up or quality to go down. In this case, Amazon can argue, quite vehemently that, through its platform, consumers are paying lower prices, say legal experts. [...]

“You have to show that the end game is some sort of consumer harm, either through higher prices or lower quality,” said Herbert Hovenkamp, an antitrust professor at the University of Pennsylvania Law School and the Wharton School. “And so far, Amazon doesn’t even show up on the radar screen when it comes to consumer harm.”

Somewhat of an aside, but hopefully interesting in this context, according to a comparative policy paper (p. 24) the EU generally has had more numerous enforcement actions on "Abuse of Dominance" issues, in the past 40 years or so. 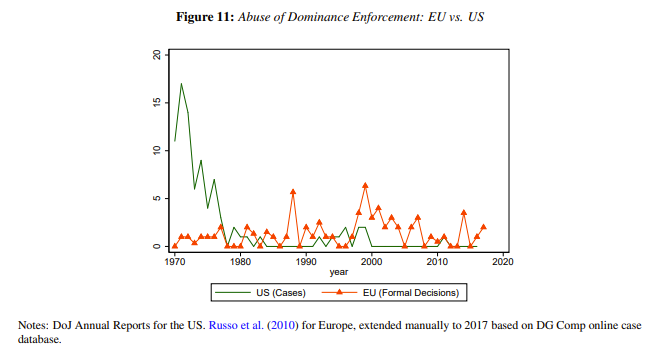 Generally speaking, looking at the Wikipedia's summary of EU law and jurisprudence on competition, it recognizes not only "exploitative abuses, whereby a dominant firm abuses its market position to exploit consumers – for example by reducing output and increasing the price of its goods or services" but also "exclusionary abuses, involving behavior by a dominant firm which is aimed at, or has the effect of, preventing the development of competition by excluding competitors". As Wikipedia notes, the EU Commission has acted more often on the latter kind (i.e. exclusionary) behavior--their reasoning seems to be that acting on exclusionary behavior earlier will largely preempt the need to act on exploitative abuses later (when there's less competition).

Not the answer you're looking for? Browse other questions tagged commerce amazon .

121
Does Amazon use Oracle instead of AWS to run their business?