Were Vietnam veterans spat on?

The idea that Vietnam veterans in the United States were spat on when they returned seems to have taken hold. It's mentioned in the movie First Blood ("Rambo"):

And songs and in books, but there don't seem to be any first hand accounts of it.

In his book The Spitting Image Jerry Lembcke claims that it's a myth and never happened, or at least not in any confirmed incident. Furthermore it states that the peace movement were the veterans' natural allies, rather than likely to spit on them.

What is the truth here?

Lembcke has published a number of articles asserting many times that this is a myth, so it is probably helpful to cite another writer on the same subject. Bob Greene, in his book Homecoming (1989), collected many anecdotes of supposed spitting incidents, solicited through a national newspaper column. However, he collected just as many letters from Vietnam veterans insisting that such anecdotes were false and created after the fact for reasons that all veterans knew.

Why were such anecdotes popular, and do they appropriately characterize what happened when Vietnam veterans came home? Here is how one historian characterizes the real situation in 1969-73:

During the height of American participation in the Vietnam War in the 1960s, most accounts of the Vietnam veteran returning from the war zone presented him as readjusting quite well to civilian life. The New York Times noted in 1968 that returning servicemen were finding jobs faster than at any time in the past 10 years... The first American troops to be withdrawn from Vietnam (in 1969) were greeted by a parade in Seattle at which the crowd yelled "Thank you! Thank you!" and "flags waved, ticker tape showered down on the troopers, and pretty girls pressed red roses into the men's hands."

Despite these warm welcomes, Dean describes that a story of Vietnam veterans as "forgotten" set in very quickly around 1971-73. For example, heroin use by soldiers was seen to indicate despair, although nearly all quit using heroin upon return to the US. This is when most stories of spitting seem to be dated to after the fact, but again, historians including Lembcke, Dean, and others tell us that it was exceedingly rare to find such reports in period archival material, which makes it hard to judge how many such incidents really took place.

Dean links the idea of the forgotten, unwanted veteran in need to larger national narratives in which the war itself was seen as unwanted. Many veterans publicly confessed to My Lai-like incidents to provide their assent to a narrative of unwanted war with unwanted veterans. Such a narrative demanded national political response, and Dean continues:

[A] national obsession to "welcome home" the Vietvet developed in the late 1970s, and manifested itself primarily in various declarations, lavish parades for the Vietnam veterans, and the construction of the Monument to the Vietnam War Dead in Washington, D.C. President Carter followed the example of Presidents Nixon and Ford of honoring the Vietvets by declaring a Vietnam Veterans Week. In addition, Veterans' Day on 11 November 1979, was dedicated to the Vietnam veterans, and Congress declared 26 April 1981 to be "Vietnam Veteran Recognition Day."

On 7 May 1985, 25,000 Vietnam veterans marched in a New York City ticker-tape parade attended by one million people, many of whom held signs saying: "You're Our Heroes, Vietnam Vets."26 Similar parades followed in Chicago, Houston, and elsewhere. An oddity associated with these repeated welcomes and parades was that with each new one, some veteran would inevitably be quoted as saying that the Vietnam veterans had never received such recognition before and were "finally being welcomed home."

Dean has also written a book, Shook Over Hell (1997), which aims to demonstrate through comparison of primary sources that Vietnam veterans actually had a much warmer welcome and treatment than Civil War or WW2 veterans.

Dean and Lembcke are in agreement that soldiers received a warm welcome. They provide only slightly differing accounts of how the myth of being spat on developed, with Dean attributing it to the narrative of the war being unwinnable, and Lembcke more specifically citing right wing commentators' belief in a stab-in-the-back story of "betrayal at home" (a common myth which continues to be repeated by sources like PragerU on YouTube).

Other historians have considered different angles. Myra MacPherson, in Long Time Passing: Vietnam and the Haunted Generation (1984), considered the inability of Vietnam veterans to live up to the heroic story of their fathers' experiences in World War II. Tracy Karner, in her article "Fathers, Sons, and Vietnam" (American Studies 37.1, 1996), analyzes this from a slightly different angle, proposing that the veterans' own self-identity as men was wounded by this inability to live up to the heroic WW2 narrative, and that this often manifested itself in a new narrative of loneliness, meaninglessness, and attempts to prove oneself with dangerous activities and drinking. In fact, this article by Karner is one of the earliest uses of the phrase "toxic masculinity".

These accounts are all basically handling essentially the same issue of veterans' experiences and memories failing to find a place in the national narrative of an unwinnable or betrayed war, as opposed to the veterans being literally welcomed home and thanked by their communities upon return from Vietnam. It is hard to prove that no returning veteran was ever once spat on, but the narrative that such anecdotes attempt to reinforce is definitely false and has always been false.

The 35,000 marchers on the Pentagon were mainly sincere young demonstrators...but also the hoodlums who spat on the troops, threw rocks through Pentagon windows, daubed the walls with lavatory obscenities

According to the Congressional Record, House of Representatives, 5 December 1967:

We saw the “hippies” and their “peacenik” pals, male and female, rush in behind the vanguard cadres and advance on the MP's and Federal Marshals, spitting in their faces, reviling them with obscene profanity, and, yes, attacking the militia...

Another example is, as reported in 17 July 1971 Lawton Constitution at page 8, and in other newspapers: 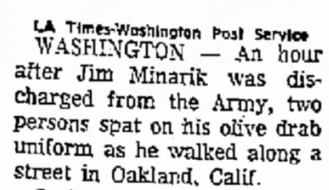 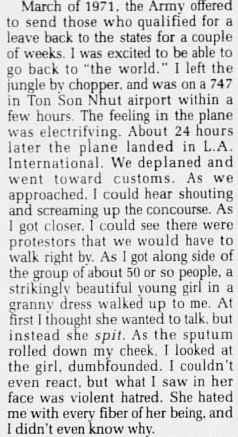 Then we saw the first spitter. An older woman in a fur coat with carefully teased hair. She spits at us. Then she spits again. She leans over the saw-horses which form the police barricade. She spits at these 22-year-old men who were forced to fight through the jungles and rice paddies of Vietnam. One of the vets blows her a kiss and smiles. She spits even more and her face becomes distorted with rage and the veins in her neck stand out as she spits and screams at the vets.

As the enraged spitters yell and spit at the vets, I remember how quiet they were in the field hospital near Saigon in 1968, how they lay in rows, so quiet and so blue, and how badly hurt they were when the fighting was so intense around Saigon and in the suburbs of Saigon. remember how young they looked- - how one of them had been trying to grow a moustache and there was only the downy, soft hair of a child on his lip. I remember how young they looked, and I think of how old these spitters with their fur coats look.

So many of the vets are on welfare, and the ones with the fur coats spit on them. The $100 a plate at the Commodore tonight — I wonder how many of the vets on welfare will be there. Then, up into the 50's. Four Army men, in uniform standing on the curb, with green berets. One gives the clenched fist sign of support as VVAW passes by. Another sees this and gives a command. All four come to stiff attention. Then, near the reviewing stand. Bleachers erected on the east side of the street on Central Park West. Three or four hundred lifers and colonels, resplendent in their dress uniforms, like brilliantly colored roosters, standing at stiff attention as the flags and little boys in uniform marched by. Then, as the fatigue-jacketed VVAW contingent marches by, upon obviously pre-arranged signal the lifers turn their backs on VVAW and we see a sea of brightly colored uniformed backs (asses). The only ones who didn't turn were the one in wheel chairs and none of the lifers remembered to turn their wheel chairs.

Not the answer you're looking for? Browse other questions tagged united-states vietnam-war .

26
Was 19 the average age of a combat soldier in Vietnam?
46
Was superglue invented to seal bullet injuries in Vietnam?
15
Does the Veterans Health Administration (VHA) provide higher quality, cheaper care than most other US health systems?
15
Were younger people more likely to support Vietnam war than people older than 50 years old in the 60s?
7
Do veterans account for one in seven homeless US adults?
24
Have more US veterans taken their own life in the last six years than died in Iraq and Afghanistan?
14
Have ATMs across the US “spat out money” in the second half of January 2018?
37
Did more gay men die in NYC during the AIDS crisis than US soldiers in Vietnam?
6
Did more Vietnam vets kill themselves after the war?
105
Did 20% of US soldiers in Vietnam use heroin, 95% of whom quit afterwards?