Could "Generation Z" be the most conservative one since WW2?

I've found several sources that explain that "Generation Z" could be the most conservative one since the end of WW2.

Some of the sources, are the ones that follow:

Dailymail: They don't like drugs or gay marriage, and they HATE tattoos: Is 'Generation Z' the most conservative since WW2?

CNSnews: The Next Generation of Americans (Gen Z) May Be the Most Conservative Since WWII

Is the claim I'm mentioning backed up by reliable data that shows that "Generation Z" could be with a considerable probability more conservative than the other mentioned generations?

All three articles are basing their claim off an internet quiz and not an actual poll. Evidence points to this Quiz being not scientific in any way and its results should be ignored. An actual poll on conservative vs. liberal views broken down by Generation was done by the Pew Research Center which shows that members of Generation Z are very similar to Millennials in their views on

In addition, there is evidence that members of Generation Z who are registered as Republicans (the conservative party in the United States) are more left-leaning than Republicans from other generations.

For the purposes of this question, we will be relying on the Wikipedia definition of Conservatism in the United States.

Conservatism in the United States is a broad system of political beliefs in the United States that is characterized by respect for American traditions, republicanism, support for Judeo-Christian values, moral universalism, pro-business and anti-labor union, anti-communism, individualism, advocacy of American exceptionalism, and a defense of Western culture from the perceived threats posed by socialism, authoritarianism, and moral relativism. Liberty is a core value, as it is with all major American parties. American conservatives consider individual liberty—within the bounds of American values—as the fundamental trait of democracy; this perspective contrasts with that of modern American liberals, who generally place a greater value on equality and social justice and emphasize the need for state intervention to achieve these goals. American conservatives believe in limiting government in size and scope, and in a balance between national government and states' rights. Apart from some libertarians, they tend to favor strong action in areas they believe to be within government's legitimate jurisdiction, particularly national defense and law enforcement. Social conservatives oppose abortion and same-sex marriage, while privileging traditional marriage and supporting Christian prayer in public schools.

The articles you cited above are basing their headline on a single internet Quiz from a company called The Gild.

And get this: According to one British study conducted by global consultancy firm, The Guild, almost sixty percent of Gen Z respondents in the U.K. described their views on "same-sex marriage, transgender rights and marijuana legalization" as "conservative" or "moderate," compared with a whopping 83% of Millennials who called themselves "quite" or "very liberal" on these issues. The Gen Z participants were even ten times more likely than Millennials to dislike tattoos and body piercings!

And get this: According to one British study conducted by global consultancy firm, The Guild, almost sixty percent of Gen Z respondents in the U.K. described their views on “same-sex marriage, transgender rights and marijuana legalization” as “conservative” or “moderate,” compared with a whopping 83 percent of Millennials who called themselves “quite” or “very liberal” on these issues. The Gen Z participants were even ten times more likely than Millennials to dislike tattoos and body piercings!

Only 14 and 15-year-olds were surveyed, by brand consultancy The Gild, as they were classed as being able to form credible opinions by that age.

It should be noted that all three of these outlets are rated Right/Extremely Right on MediaBiasFactCheck.com

(...)a strategic brand consultancy with a mission to positively impact culture & commerce through a blend of art & science. We specialise in insight, innovation, strategy & creative.

The link to the Quiz seems to be permanently down, as I was able to track down what appears to be the link to it to https://www.the-gild.com/generation-quiz, but as of 11 November 2019 is returning a 404 error.

The only place I was able to find a description of the Quiz was on a website for a consulting company called After the Millennials. They self describe their on their About page as follows.

After the Millennials is the first and only consultant service established specifically to understand Generation Z – now and in the future. Sometimes called Generation Z, iGen, Plurals or the Homeland Generation, we still don’t know which name will “stick”. But we can’t let this stop us from preparing for the tsunami of change they represent.

Driven by a voracious intellectual appetite for learning how different people tick, I have studied this youngest generation since they were first conceived. Understanding people helps us see new emerging trends and patterns. Analyzing our existing environments and stakeholders helps us envision, plan and prepare better for the future.

A combination of data analytics, content analysis, strategic foresight, and generational theory can help us see important trends, sometimes years before they happen. This custom-made interdisciplinary approach has allowed me allows me to help a variety of companies prepare for tomorrow. My research has brought me to numerous countries on 3 different continents as a keynote speaker and quoted by media outlets such as BBC Capital, El Pais, Deutsche Welle, The Verge, Vox, Motherboard and more.

From their description of the Quiz.

As soon as I landed on The Gild’s website I was invited to partake in the very same survey. No filter question to make sure I met sampling criteria or any other requirements were needed to participate. The Gild prepped my motivation by telling me: “Big Business and Governments are stereotyping you into one of six generational groups” and, “At The Gild, we think that’s wrong and needs to stop, so we’ve designed this Generation Quiz to prove or disprove our theory, and we need your help.” So as the freedom-loving, justice-seeking arm-chair activist I am, I was ready! I’d show those Big Businesses and Governments they can’t pigeonhole me or create mind-controlling Newspeak based on my generation or my preferences!

First I was asked to compare statements and pick the one from each category I agreed the most with. Since the statements were double-barreled and categories were overlapping, I had a hard time finding a statement that fit me. None of the 5 answer alternatives managed to capture my preferences and idiosyncrasies. But the biggest puzzle to me was: How do they get teenagers with 8-second attention spans to read through questions with five long winded answer alternatives like: “My main focus is on being fit and healthy, enjoying life and spending quality time with my family.”? Having designed a few nation-wide surveys aimed at this age cohort myself, I’ve learned to keep the butcher knife close, chopping up and eliminating even the tiniest part of bad meat from my sentences to accommodate this easily distracted target group.

But the funniest part was, when the survey was over I could just refresh the page and do it all over again! No IP address detector to block me from taking it twice. Even more, I was encouraged to share it over my social networks, ensuring that my echo-chamber could eliminate any tiny element of random selection mechanism that might have otherwise existed.

This wasn't a survey. This was an internet quiz that you'd see shared on Facebook where you'd answer questions trying to figure out which character you'd be from Game of Thrones.

To offer as a counterpoint, the Pew Research Center published an article on 19 January 2019 titled Generation Z Looks a Lot Like Millennials on Key Social and Political Issues. I'm not gonna quote each individual word on this article, because I could very easily quote the entire thing. I strongly suggest you read the article in its entirety, but for the sake of posterity I will include some of the relevant data points from the article here. 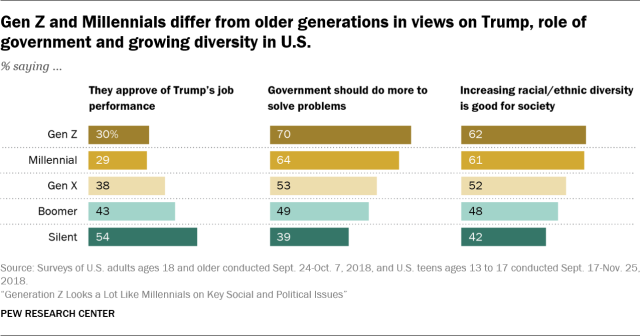 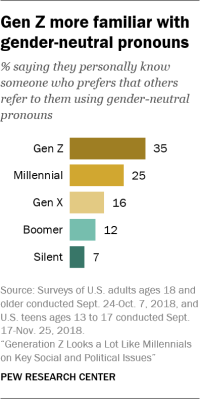 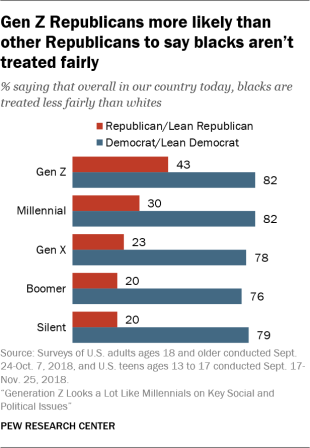 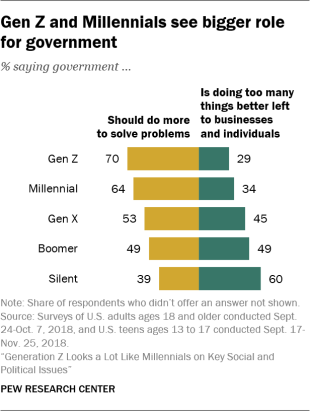 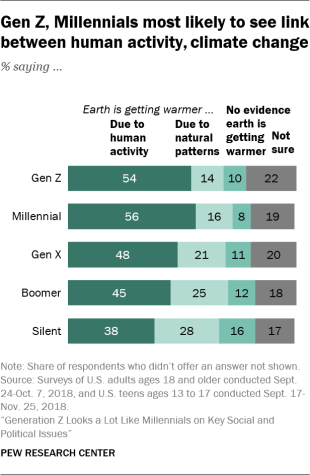 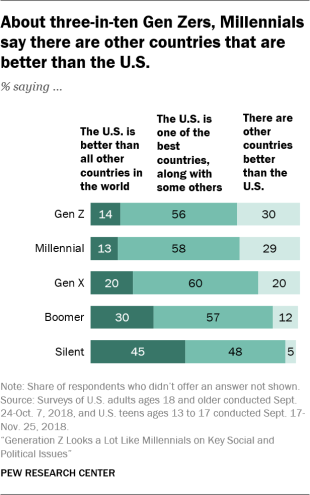 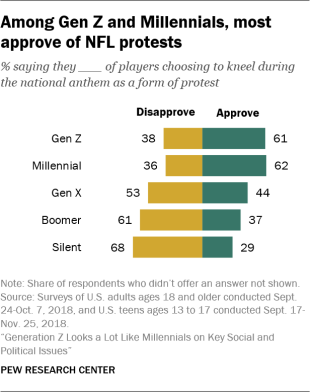 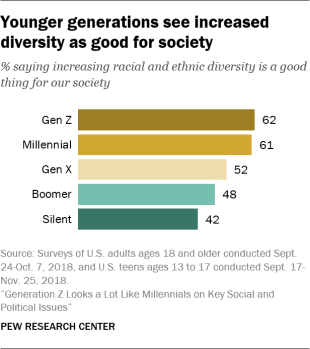 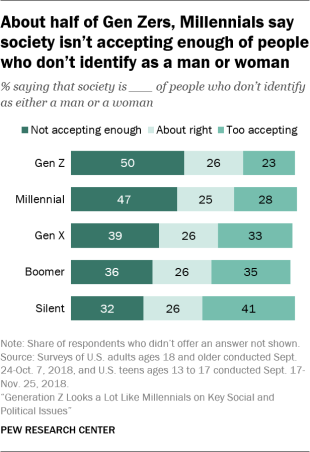