Are a third of the crimes in Italy committed by migrants?

The Italian Interior Minister Matteo Salvini is being criticized after numerous racist assaults happened after he introduced his anti-immigration policy:

Asked whether these racist attacks were symptoms of a racism emergency in Italy, Salvini replied that migrants are to blame for a third of all crimes in Italy:

At the same time, he dismissed concerns over racist attacks in Italy, saying migrants were to blame for a third of all crimes in the country. "This is the only true drama," he said.

The full quote seems to include a specific number of crimes, 700 per day:

"We racists? The only alarm to the 700 crimes per day of immigrants "

"I remember that the crimes committed every day in Italy by immigrants – he adds – are about 700, almost a third of the total, and this is the only real real alarm against which I am fighting as a minister".

Here is a more notable source for the quote (one of the top-selling Italian newspapers), however the page is in Italian:

Are a third of the crimes in Italy committed by (possibly non-EU) migrants?

No part of Matteo Salvini's claim is true.

When looking at data from the Italian National Institute of Statistics(Istat), neither the 'one third' or '700' claim make any sense in regards to the number of crimes committed. Unless Salvini provides the source of those numbers, it's pretty safe to say either he or his source made them up.

However, roughly one third of total people convicted in Italy did have a 'foreign origin'. The claim is still wrong as not every foreigner in Italy is an immigrant, but it may be the reasoning behind Salvini's claim.

(all of the data in this answer can be found here)

Number of crimes per day: To start, the claim that immigrants commit 700/one third of all crimes committed daily is simply wrong: nearly 7000 crimes are reported daily in Italy. According to official Istat data, there were about 2.5 million reported crimes in Italy in 2016:

The above is all reported crimes, including those where the offender and their nationality is unknown. Looking at only crimes with known offenders, there were 1500 per day in 2016:

Therefore, in order for Salvini's '700' number to be correct either total crime dropped 70% since 2016, or the number of solved crimes has risen 50% since 2016. Neither of those are realistic, so the '700' part of the claim is likely just completely made up. 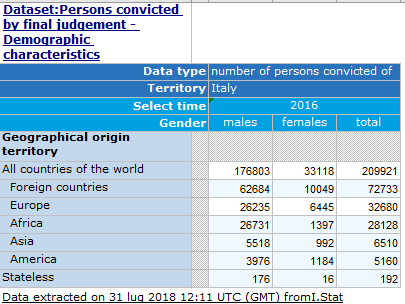 As you can see, roughly a third of the 200,000 total convicted criminals were from somewhere other than Italy. However, it is misleading to say they are immigrants, as this stat includes every foreigner in Italy: immigrants, tourists, migrant workers, refugees, travelers passing through Italy, etc. Because of this, it is safe to say that the percentage of criminals who are immigrants is some large amount less than one third(and far below 700 per day).

In short, until we know where Salvini is getting his data we can say the claim is completely false. Saying that 700 crimes/a third of the total are committed by immigrants daily makes absolutely no sense, as the total number of crimes is much too high and the number of crimes with known offenders is too low. Saying that a third of all criminals in Italy are immigrants is slightly less wrong, though it is still not true.

31
Are more crimes committed during a full moon?
19
Are heavy metal music listeners more likely to commit crimes?
5
Does the 'Mafia' still exist in Italy?
115
In the US, are illegal immigrants more likely to commit crimes?
33
Are there 2-3m illegal migrants with criminal records in the USA?
17
Did the police in Italy force an elderly hotel owner to house African Illegal Immigrants on his property?
10
Are bars in Italy using pasta as straws?