Are there shanty towns in Paris?

Recently I started to see many images of shanty towns in Paris, supposedly created by immigrants.

One included below is especially popular. Text says:

Is this image true?

If yes, where is it? If no, is there a real problem with shanty towns in Paris at all? 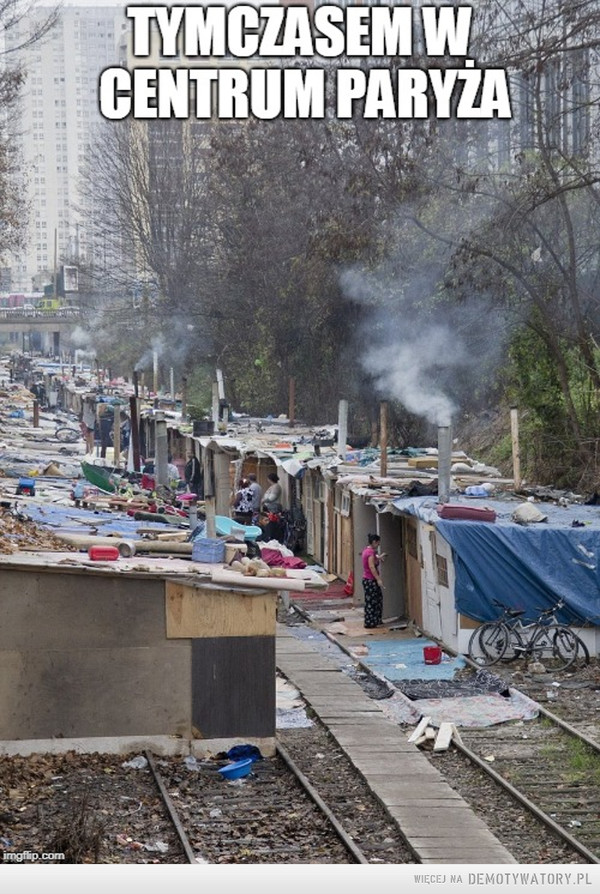 This image (linked to on Facebook etc, at least from my PoV):

Sites with similar vibes and images:

I asked about the one that currently appears to be the most popular one, but of course we all live in "information islands".

The original question asked about "slums", but the picture shows a shanty town or squatters settlement. In English a slum is a district inhabited by very poor people living in buildings that are permanent but substandard (e.g. leaking roof, mould on walls, no indoor plumbing) while a shanty town describes a collection of improvised structures such as the one shown in the picture. "Squatters" are people who take up residence in a property without the permission of the owner. The inhabitants of a slum are not usually squatters (although some may be).

The image is true in the sense that it was not manipulated in its pixels, and it is true that it depicts mainly Roma people who set camp on the railway line in Paris. But the date of "meanwhile" is manipulative as it indicates present day 2018 Paris. Taken together, that is a "No. That picture with its caption is not 'true'."

Paris' former Chemin de fer de Petite Ceinture ('small(er) belt railway'), also colloquially known as La Petite Ceinture, was a circular railway built as a means to supply the city's fortification walls, and as a connection between Paris' railway termini.[…]
Re-use and Present state
Access to the unused rail tracks is forbidden, but enthusiasts explore it nonetheless, describing it as a quiet, natural garden space within Paris

"Forbidden" does not mean inaccessible though: How To Explore Paris’ Beautiful, Abandoned Railway.

The above picture in doubt is confirmed when looking at newspaper reports like:

Life in the new shanty town taking root on Paris's abandoned railway: But a few hundred metres away, hidden behind a large metro ticket booth, a camp has taken shape. The 19-mile belt of Petite Ceinture has been derelict for several decades and its possible redevelopment has long sparked debate among environmentalists and entrepreneurs. Then, shortly after the migrant crisis hit Europe, the squatter’s camp took root. “I know there is a Roma camp just a few minutes walk from La Recyclerie, I think it is just straight down the rails,” says one of the cafe’s bartenders, “but I’ve never been there, nor said hello.”
With shacks made from wooden boards and sheets of plastic, and with numerous pans covering holes in case of rain, this 500-metre section of track is home to an estimated 350 people. The infrastructure is nonexistent: there is no electricity and no running water. Camp residents must make the walk to the municipal showers at Porte de Saint-Ouen, almost a mile away.
Many camp residents are Roma from Romania or Bulgaria, but as Philippe Gossens at the Ligues des Droits de l’Homme (League of Human Rights) explains, refugees from the Middle East also live here, after fleeing their homes and making their journey to Europe over the summer. 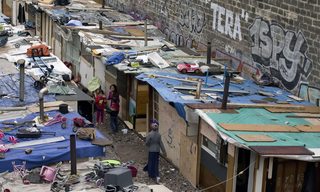 According to French law, anyone who trespasses on the Petite Ceinture is subject to a €3,750 fine and six months in prison – but the Reseau Ferre de France (the French Railway Network), which owns the abandoned railway, has so far kept silent on the camp and its future. In the first few months of 2015, though, French authorities destroyed 37 squatter camps and displaced more than 4,000 people, according to the Ligues des Droits de l’Homme (the League of Human Rights).
The Guardian, Tue 5 Jan 2016 12.42 GMT Last modified on Fri 11 May 2018 13.12 BST

This kind of news making the round is of course not very welcomed by the French authorities:

Paris police clear Roma from disused railway line camp
Police have cleared hundreds of Roma people from a slum-like camp built on a disused rail line in north Paris. More than 350 Roma people had lived in the camp on La Petite Ceinture since mid-2015. Activists said many left early ahead of the police action. The site belongs to the national rail authority SNCF. France has one of Europe's toughest policies towards Roma. Most live in camps that are regularly demolished and every year thousands are deported. Amnesty International urged city authorities to find a lasting housing solution for those evicted in Paris - saying they would become homeless in mid-winter.
BBC World 3 February 2016

The real and bigger problems to the present day in and around Paris have a more permanent structure and the problem zones are typically populated with French citizens. The name for these problem areas is "Quartiers Sensibles" (i.e. the poor Banlieues, often equated with or called "cités"). These are often equated with plain "slums" as well:

Counting what is actually and commonly defined as slums, France as a whole seems to have an ongoing problem, although on a smaller scale than with the suburbs.

Le Monde: Ces 570 bidonvilles que la France ne veut pas voir (2017) discussed in English in France races to tear down its 570 squalid shanty towns but root problems persist and Outlining the global fault lines of the ‘slum’ narrative as: “The 570 slums that France doesn’t want you to see”, drawing attention to the hundreds of informal settlements in France (113 in the Paris region alone) where 16,000 inhabitants live a marginal and precarious life.

The key difference to classify that picture circling now as not entirely "true" is that the actual conditions depicted are not "current events" in 2018 and that the more depressing scales of French problems lie elsewhere and that even when actual "slums" keep popping up, they are not as permanent as commonly believed and understood for "slums" or frozen in that picture, but relatively quickly evicted in general. Scandalous as these conditions are, nonetheless, they are also not exclusive to France.

That "meanwhile" in question was a rather short lived phenomenon captured in that photo. There may be very well relatively small slum-like "settlements" in Paris, and elsewhere, now. But the scenes in the picture are not to be found any more, and on that location depicted they are very unlikely to return there (A High Line for Paris, Only More So). As a "look at the scandalous news from Paris" picture this is manipulative in 2018.
As long as deprived citizens, migrants and refugees are treated like they are in Europe these shanty towns can pop up everywhere at any time.

Although, as LangLangC stated, the image you provided doesn't show an actual migrant camp (the Roma people didn't come to France during the migrant crisis of 2015 but rather since 2008 when Romania and Bulgaria entered the EU, and keep coming here since then), there were until recently two big migrant settlements in Paris at Porte de la Chapelle and Canal Saint-Martin.

They were dismantled last month but the government offered no real solution so far for these migrants, so other settlements might pop out sooner or later, in Paris or the surrounding area.

Police have evacuated the largest illegal refugee camp in Paris days after homeless charities warned that the situation was heading for “tragedy” following a stabbing and two drownings.

French police evacuated two migrant camps near the Canal Saint Martin and Porte de la Chapelle in northern Paris on Monday morning, less than a week after clearing out a another larger migrant camp. Many of the people who have been evacuated are worried about their futures. Under EU legislation, they could be sent back to the first EU country that they entered and, in some cases, deported to their countries of origin. 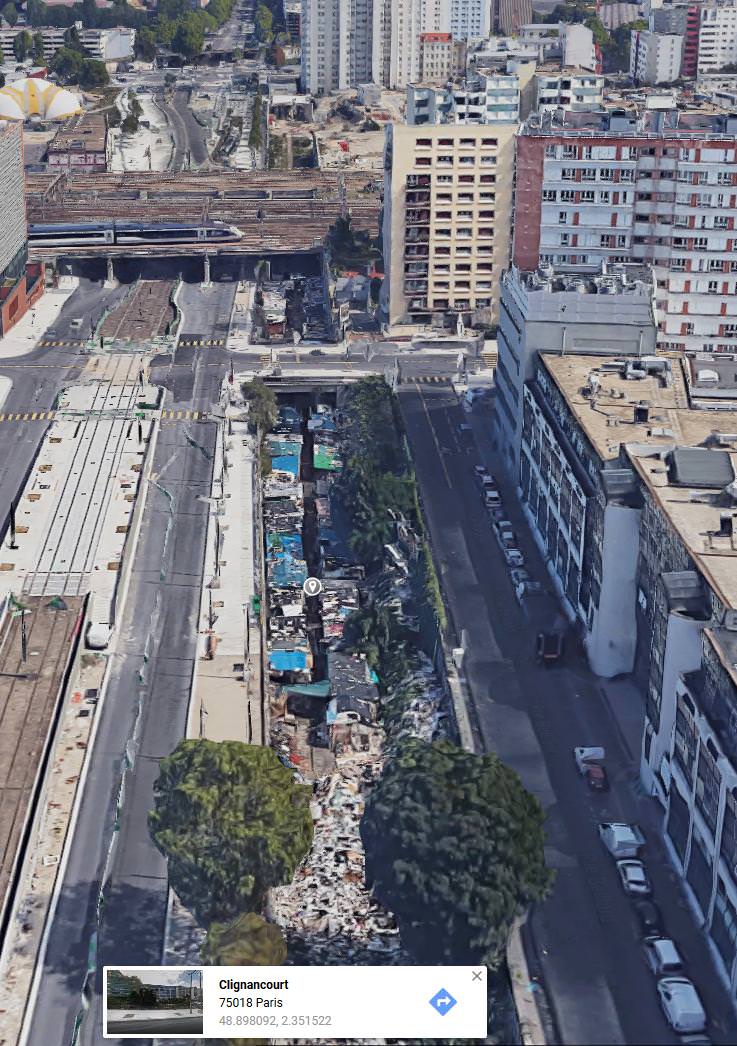 Not the answer you're looking for? Browse other questions tagged immigration france .

11
Are there 12 million illegal immigrants in the United States?
97
Are there officially pronounced “no-go” Islamic zones in France?
6
Are there 30 million non-legal immigrants in the United States?
7
Has the Eiffel Tower gone dark in the wake of the November 2015 Paris attacks?
27
Were the Paris attackers youths from Syria?
34
Are there 2-3m illegal migrants with criminal records in the USA?
15
Is there a French law governing the shape of the croissant?
84
Are these 'French children held at gun point'?