Is there a French law governing the shape of the croissant?

Many popular articles, forum discussions, etc. claim that in France, the curved croissants are typically made with margarine, while the straight ones are made with butter (and are ostensibly superior). E.g. Adam Gopnik writes in the New Yorker,

"As veteran visitors to Parisian bakeries know, the superior, all-butter croissants are already commonly articulated as straight pastries—or, at least, as gently sloping ones—while the inferior oil or margarine ones must, by law, be neatly turned in."

The law is usually said to mandate that straight croissants must be made with butter. The crescent-shaped croissants are said to not be regulated, but to usually be made with oil or margarine.

Is there actually such a law or regulation? I wasn't able to find one.

I'm pretty sure there's no law (but the habit is genuine). I cannot find a definitive answer, but since it's difficult to prove a negative, I'm going to offer some fairly strong evidence.

It may not be a law, but it certainly is a widespread habit to make croissants au beurre (croissant made with butter) straight or nearly straight, and croissants ordinaries (croissants made with margarine) curved in the shape that gave the pastry its name. This is mentioned in a newspaper article and two courses for bakers, with no claim that this is regulated by more than habit:

[After World War I, the croissant gradually became accessible to less wealthy classes.] Rich people will have butter croissants — in an elongated shape — while the “money-light” will have to make do with curved margarine croissants. (Le Monde, “Les Mystères du croissant”, 2005)

Then curve the croissant if you used margarine, and leave it straight if you used butter. Le façonnage des croissants, in Conseils CAP pâtisserie, Grégory

Since margarine was invented a century later than the introduction of the croissant in France, the butter croissant is the one that was originally curved. One can imagine that the looks were swapped, since in business there are more sales of butter croissants than of ordinary croissants. Indeed it is faster and more cost-effective to make straight croissants and store them in a freezer than it would be with a moon-shaped croissant. La Viennoiserie, in Technologie boulangerie CAP, D. Guedes

And just to show that it isn't a universal rule, here's a bakery website showing a curved butter croissant and a straight margarine croissant. For all I know they swapped the pictures by mistake, but it shows that it isn't such an ingrained habit in France that anybody would spot the inversion instantly. 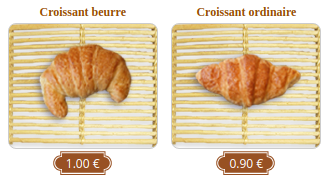 ¹ Note that “croissant” in French can also mean “increasing” or “ascending” as in sorted in ascending order, which explains why so many pages on this .

5
Did the French General Henri Gouraud kick and insult Saladins grave in 1920 after putting down an anti-colonial uprising?
11
Was French spelling artificially altered for longer words?
1
Has Egypt sold two French-made Mistral warships to Russia?
8
Did 16% of French citizens support ISIS in 2014?
84
Are these 'French children held at gun point'?
41
Did French police fine homeless persons for not being confined at home?
1
Did Emma Willard send a letter to the French government appealing for women’s suffrage in 1848?
38
Did the French government print posters explaining COVID-19 vaccination passport policy already in January 2020?