Kind of related to the question specific to Topsy the elephant, the (somewhat famous) Oatmeal comic about Tesla claims, among other things, that Edison would pay schoolboys to kidnap people's pets, after which he would publicly electrocute them. 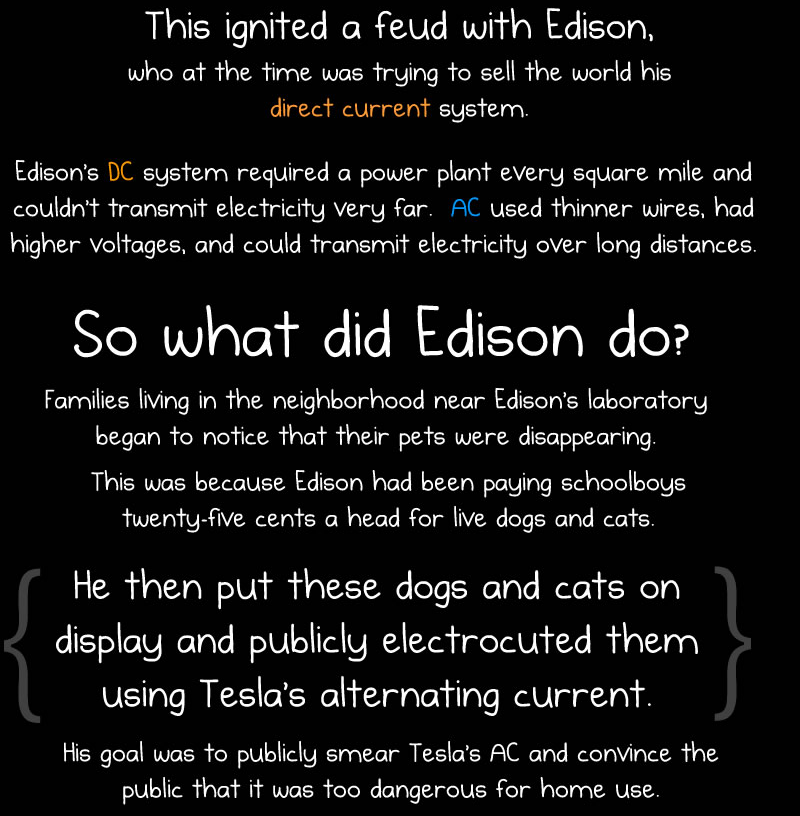 Verifying this claim is rather difficult; electrocuting animals was indeed a thing during the War of Currents and many articles cite more famous cases, like the one with Topsy. In addition, it seems it was actually Harold P. Brown and not Edison himself who advocated electrocuting animals (some accounts, however, suggest Edison hired him to do so).

That said, I found these two sources:

Neither of these, however, make any mention of Edison using people's pets. In addition, the Wikipedia page for Brown claims that "Brown would continually claim he had no actual association with Edison". My question here is therefore twofold:

There, on any day in 1887, one might have found Edison and his assistants occupied in certain cruel and lugubrious experiments: the electrocution of stray cats and dogs...The feline and canine pets of the West Orange neighborhood were purchased from eager schoolboys at twenty-five cents each and executed in such numbers that the local animal population stood in danger of being decimated

Not the answer you're looking for? Browse other questions tagged history thomas-edison .

29
Was Nelson Mandela a killer?
14
Was "bug" used to refer to software bugs before being popularized by Grace Hopper?
11
Did Thomas Edison say "There is no substitute for hard work"?
60
Did Edison refuse to pay Tesla, saying "You don't understand our American humor"?
20
Did Stalin kill more than 10 million People?
16
Did Thomas Edison steal inventions?
6
Did a NY Supreme Court judge give positive reviews about USSR prisons?
24
Were senior officals who outran their executioners pardoned in the Ottoman Empire?