A number of recent articles (Daily Mail, Fox News, Hindustan Times) describe ice cream cones being sold in India which are labelled as "Hitler" distinctly on their boxes.

If you think the Nazi leader Adolf Hitler has nothing to do with ice-creams, you’re wrong. Photographs of an ice-cream cone manufactured in Uttar Pradesh and named ‘Hitler’ have been doing the rounds on social media, with the brand drawing severe flak from across the world. Media reports said the news had outraged many in Germany.
The brand’s cartons were adorned with a photo of a stern-looking Hitler dressed in a brown blazer and a cartoon of the Fuhrer doffing his hat. Attaching the viral photos, Congress leader Shashi Tharoor tweeted, “Height of tastelessness; Indian ice-cream named after Hitler. Would the Germans name a sausage after Godse?” 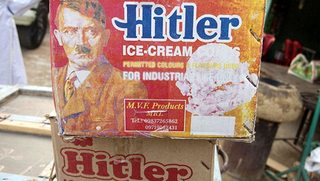 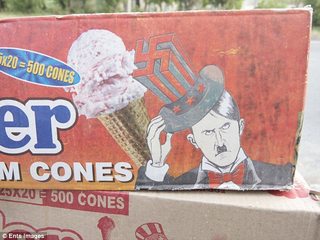 Is such a product actually sold commercially for profit in India, or is this merely a joke/hoax/photoshop?

This seems to be a genuine product.

The Hindustan Times report above, which seems to be the origin of most of the non-Indian reports, gives considerable detail on the name of the manufacturing company and the name of the owner, which it would be unlikely for even a semi-reputable newspaper to do without fact-checking. It also gives details about the decisions behind the name:

Neeraj Kumar, owner of Meerut-based MVF Products, which manufactured the cones, said cones were named after an uncle who was nicknamed “Hitler” because of his quick temper. “In our Uttar Pradesh village,” said Kumar, “anyone who has a ‘karak mejaz’ is called Hitler. One of my uncles is a short-tempered and strict man, so we nicknamed him Hitler. “While naming this particular batch of cones, I thought why can’t we have a little fun at the expense of my uncle and name the cones after him! That was how the name originated.”

The article also points out reasons why use of Hitler's name is not as taboo as it is in the West. Fewer Indians are aware of The Holocaust, or Hitler's role in World War II. There is also a significant body of opinion that viewed the British colonialists as evil oppressors of India, and were inclined to look more favourably on anyone who opposed them. Even during World War II there was a substantial body of opinion that favoured allying with the Axis in order to free India from Colonialism.

Not the answer you're looking for? Browse other questions tagged india adolf-hitler commerce .