Is Israel the only "Free and Democratic" country in the Middle East?

I read a lot about the State of Israel being the only Free and Democratic country in the Middle East:

This is really the worst situation by far that any of us have seen as far as U.S.-Israel relations. The only … free and democratic nation in the entire Middle East, and it’s very serious, and it’s very unfortunate.”

Once again, objective and non-political academic studies place Israel as the only free and democratic country in the entire Middle East.

Israel is rating by the FREEDOMHOUSE as the only free and democratic country all over the Middle East.

Israel is the only free and democratic state in the Middle East.

At the same time there is a lot of anti-Israel reporting in EU media, and even claims of the State of Israel being an apartheid state.

Is Israel free, democratic and the only example of both in the Middle East region?

To answer this controversial question, data will be used from Freedom House, a U.S.-based non-governmental organization (NGO) that conducts research and advocacy on democracy, political freedom, and human rights.

The measure of the level of democracy in nations throughout the world published by the Freedom House,the Middle Eastern countries with the highest scores are:

Countries that are occasionally classified as partly democratic are:

The remaining countries of the Middle East are categorized as authoritarian regimes, with the lowest scores held by Saudi Arabia and Yemen.

The below table summarizes the findings of the 2010 - 2015 Freedom in the World report on the countries of the Middle East and North Africa. 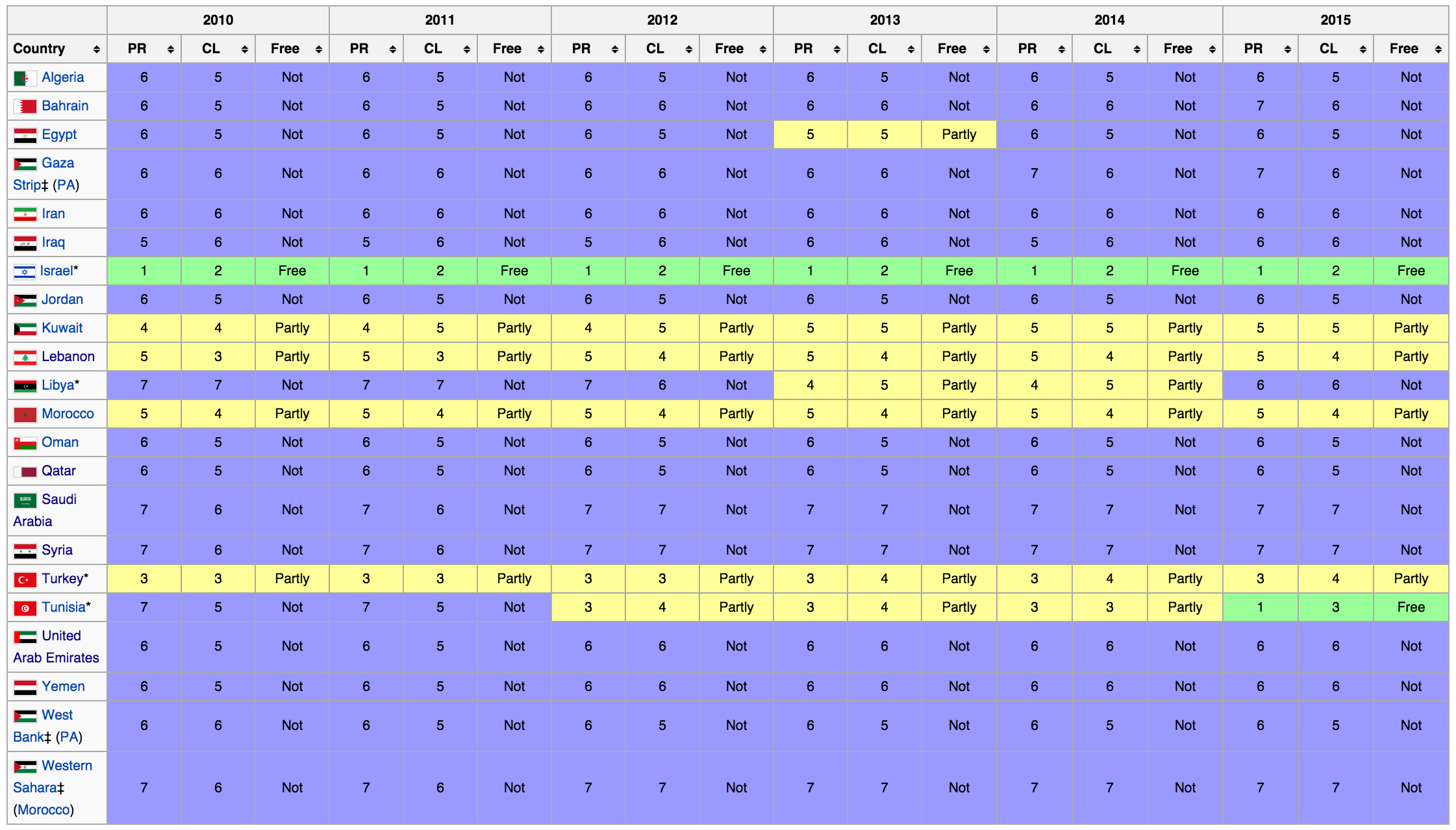 Screenshot from Wikipedia's page Democracy in the Middle East.

Freedom House categorizes Israel and Tunisia as "Free", Lebanon, Turkey, Kuwait and Morocco "Partly Free", and the remaining states as "Not Free" (including Western Sahara, which is controlled by Morocco).

In 2015, Tunisia became the first Arab country classified as free since the beginning of Lebanon’s civil war 40 years ago.

Now, as you see Tunisia is a Country in Africa and not in the Middle East.

Lebanon, was one of only two (together with Israel) politically free countries in the Middle East. But it lost its status with the outbreak of the Civil War, and has not regained it since 1975.

The above suggests that, according to Freedom House:

Israel is the only Middle Eastern country that has full democracy.

georgechalhoub, in his answer, has discussed one particular perspective on this issue. I will provide a quick summary of it below (for the sake of collecting information into one answer - for more detail and links, see his answer), and then provide some additional perspectives that demonstrate why this is not a straightforward question. Then, I will give an overall "conclusion". As this conclusion will not be definitive, I am not going to place it at the start of the answer.

From georgechalhoub's answer - Freedom House is a US NGO that focuses on advocacy of freedom and democracy. They have a yearly rating of the levels of political rights and civil liberties in each country. When it comes to the Middle East and related countries, they currently consider Israel, Libya, Turkey, and Tunisia to be the only democracies (the latter three not always being considered part of the Middle East). In addition, they currently consider only Israel and Tunisia to be free, with Kuwait, Lebanon, Morocco, and Turkey being considered "partly free".

There have been some concerns raised regarding Freedom House, specifically regarding how they rate. Namely, some have asserted, using statistical analysis, that Freedom House has a bias in favour of capitalist and christian nations. This does not make the claim true, but it is a good demonstration of why a single source is not sufficient on a politically charged claim such as this. Other concerns will undoubtedly have been raised regarding the other sources I present - I will not be listing concerns for each one, as I do not consider any one source to be especially reliable.

There are other sources, and conclusions vary depending on which source you consider more trustworthy.

The Economist has what it calls the Economist Intelligence Unit (EIU). They are, in many ways, similar to Freedom House. However, they are based in the UK, are a magazine rather than an advocacy group, and they separate their analysis in a different way.

According to their rankings (here provided via a third party), Israel is the most free and democratic of the Middle Eastern countries... however, Israel is considered a "flawed democracy" rather than a "full democracy". Deeper investigation reveals the reason for this. In most of the aspects that EIU take into account in their rating, Israel performs well, being comparable to many European nations. However, on the measure of "Civil Liberties", Israel performs quite poorly, scoring less than 6 where Australia rates a 10 and Austria rates a 9.

It would seem reasonable to suggest that "Civil Liberties" is a reasonable definition of "freedom", and thus, according to EIU, Israel would not be considered "free" in the way that many of us would define the idea.

If we consider the Economist Intelligence Unit to be trustworthy, then our conclusion would be that Israel is the most democratic and perhaps the most free, but that one couldn't really call it "free and democratic".

The Heritage Foundation (HF) is best described as a "conservative US think tank". As such, their definitions of "free" and "democratic" are somewhat different from those of the above sources. On the issue of "Freedom", they consider economic freedom to be most important.

According to their rankings, HF considers Bahrain to be the most "free" of the Middle Eastern nations, followed by UAE, Qatar, and then Israel. All four are in the "Mostly Free" region ("Free" contains just five nations - Hong Kong, Singapore, New Zealand, Australia, and Switzerland), and all are below United States and United Kingdom.

Of the three that rank higher than Israel, Bahrain is officially considered a Constitutional Monarchy (although some dispute it, saying it's an absolute monarchy), UAE is a federation of monarchies, and Qatar is an Absolute Monarchy with a parliamentary system (in other words, the parliament is a consultative body, with final power lying in the hands of the monarch).

If we take Bahrain to be similar to the UK (which is also a constitutional monarchy), then we could assert that they have similar levels of democracy. If we do this, then one could potentially assert, using these definitions of democracy and freedom, that Bahrain is the most "free and democratic" of the Middle Eastern nations.

Alternatively, we may take the alternative view that Bahrain is actually an absolute monarchy, and if we take Israel as a full democracy, then it is the most "free and democratic". However, Israel is also somewhat questionable, as demonstrated by, for instance, this Israeli Op-Ed, which claims that one can't really consider Israel a democracy, despite its electoral system, much as is claimed of Bahrain.

As such, based on the Heritage Foundation's rankings, and considerations of democracy along a similar vein, we would likely conclude that Israel and Bahrain are comparable regarding "freedom and democracy", with other Middle Eastern nations falling short either on freedom or on democracy.

Another source that considers Economic Freedom is the Fraser Institute (FI). In their report (available here) from 2013, they rank UAE, Bahrain, Jordan, Qatar, Lebanon, and Oman as having greater freedom than Israel. I have already discussed UAE, Bahrain, and Qatar in connection with HF.

Jordan is another Constitutional Monarchy, and according to the Arab Reform Initiative, in their Arab Democracy Index, which does not include Israel, Jordan comes in second place - that is, second most democratic of the Arab nations (first place went to Morocco, which if we consider Tunisia to be "African", then so is Morocco). Without the ability to compare with Israel, we can't say anything definitively, but if any nation would be considered to be in competition for "most free and democratic" by FI, it would be Jordan.

Lebanon is a complicated case - their system is parliamentary confessionalist, meaning that they have restrictions on representation to ensure that various religions get appropriate representation. As such, it is debatable whether this is less democratic, more democratic, more or less fair, etc. Oman is an absolute monarchy.

Based on the Fraser Institute's Economic Freedom measure, we would likely consider either Jordan, Bahrain, Lebanon, or Israel to be the most "free and democratic", depending on how much weighting we give to various factors.

On this measure, according to the Fraser Institute, it appears clear that Israel is not at all considered the most "free", either in terms of personal freedom or economic freedom.

From all of this, what can we conclude? Well, Israel certainly is no slouch in the category, but classification as "the only free and democratic country" is very debatable. I've identified four different sources that have different measures of "freedom", and on the basis of these four sources, we would certainly consider Israel to rate well on both measures.

However, the variations in exactly how they're rated demonstrates why this question is not a simple one - whereas most would comfortably define the US as more democratic than North Korea, such clear-cut distinctions aren't always possible. Israel has a democracy. So does Bahrain, Jordan, Lebanon, and Egypt. None of them could be called completely, undoubtedly free and full democracy... but then, the same could be said of the US, the UK, or Australia.

What can be said is that the claim that Israel is the only "free and democratic nation in the entire Middle East", as said by McCain, is simplistic and reductionist, and highly politically charged. A full and detailed discussion of the topic is not feasible in this format.

Not the answer you're looking for? Browse other questions tagged israel democracy .

7
Does the Pepsi brand name stand for "pay every penny to save Israel"?
21
Does Israel have nuclear weapons?
103
Is Stack Exchange the only major network where moderators are democratically elected?
6
Did pro-Israel Americans convince the U.S. to initiate the Iraq War?
3
Did the Nazi SS set up training camps to assist Jews travelling to Israel?
21
Did UNESCO pass 46 resolutions against Israel and 1 against any other country in one period?
21
Has Israel used banned weapons against the population of Palestine?