Did the Britons start growing crops before 1500 BC?

It has been suggested to me more than once by amateur historians on forums, that before 1500 BC the Britons only kept livestock and didn't grow crops at all.

It's worth noting that agricultural practices changed quite significantly over the course of the Bronze Age in Britain. As argued in a recent Antiquity paper, in the early Bronze Age people seem to have been doing almost no farming at all, instead falling back on foraging and pastoralism. In 1103 BCE (oh you and your dates), i.e. the Middle/Late Bronze Age, it was coming back into fashion and several new crops were introduced: spelt wheat, peas and beans. The latter two are both incredibly useful nitrogen-fixing plants which we know were essential to later agricultural practices in Britain (e.g. the Medieval three-field system), so it may be that introducing them helped the second wave of farmers to overcome the problem of soil deterioration and practice more intensive agriculture.

This paper rewrites the early history of Britain, showing that while the cultivation of cereals arrived there in about 4000 cal BC, it did not last. Between 3300 and 1500 BC Britons became largely pastoral

The evidence is a combination of analysis of: isotopes in diets, dental caries, and pollen. The paper sets out theories which have different timelines for the farming of crops, but those differing theories are mutually consistent in referring to some crop-growing going on before 1500 BCE: cultivation of crops seems to have been introduced around 4000 BCE.

Here's the relevant part of figure 2 from that paper (data about wild foraged food cropped off from the top): 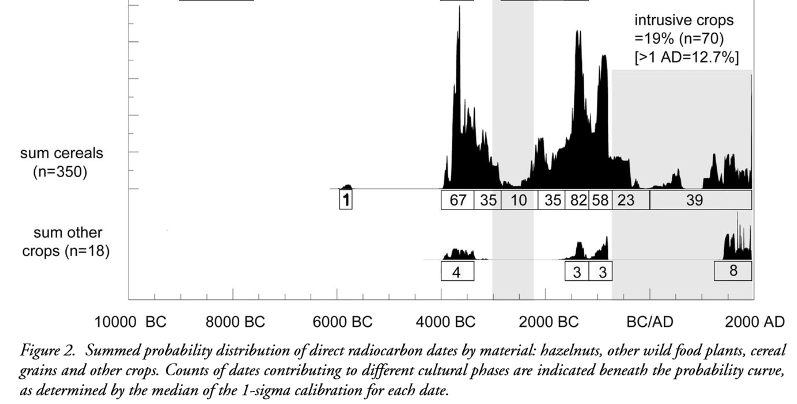 In "Radiocarbon evidence indicates that migrants introduced farming to Britain", cited in the above paper, Collard et al found that (from the abstract):

Archaeologists disagree about how farming began in Britain. Some argue it was a result of indigenous groups adopting domesticates and cultigens via trade and exchange. Others contend it was the consequence of a migration of farmers from mainland Europe. To shed light on this debate, we used radiocarbon dates to estimate changes in population density between 8000 and 4000 cal BP. We found evidence for a marked and rapid increase in population density coincident with the appearance of cultigens around 6000 cal BP. We also found evidence that this increase occurred first in southern England and shortly afterwards in central Scotland. These findings are best explained by groups of farmers from the Continent independently colonizing England and Scotland, and therefore strongly support the migrant farmers hypothesis.

18
Did travelers by troika throw passengers before the wolves, to save others?
12
Did native North Americans have cities before colonist times?
5
Did the Britons stop growing crops in the time between 3300BC & 1500 BC?
8
Did deep learning start at Microsoft?
29
Did Six FBI Agents die before they could testify before the House Select Committee on Assassinations?
0
Did the UK pay for the prince's wedding?
86
Was the wheel invented before the wall?
15
Did silver mostly not tarnish before the Industrial Revolution?
13
Did vehicle registration occur before automobiles?