Did large herbivorous dinosaurs have any predators?

I went to the Natural History Museum in London today. I saw the dinosaur exhibition, and in the exhibition was this image, of an Allosaurus attacking a Diplodocus: 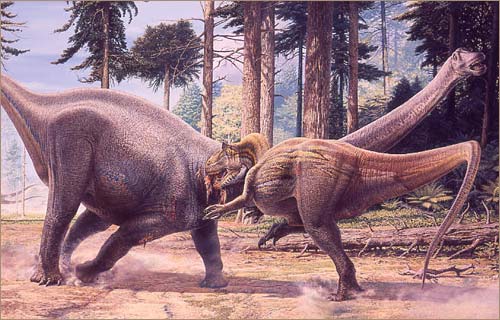 This scenario seems unlikely to me. It feels a bit like a lion attacking an elephant - the size is a natural defence. Elephants have no natural predators.

Did large herbivorous dinosaurs have any predators?

The Black Hills Institute appear to be selling a Camarasaurus sp. Tibia with Bite Marks - Fossil Replica of which they say

Camarasaurus was a long-necked (sauropodmorph) dinosaur that lived during the Jurassic age. Camarasaurus reached lengths of 60 feet (18 m) and weighed up to 18 tons (16 tonnes)! One end of this ‘teething bone’ has been completely removed by predation, probably a feeding or teething Allosaurus.

Not the answer you're looking for? Browse other questions tagged ethology zoology paleontology .

56
Are humans the only species to have homophobes?
47
Do pigs have 30 minute orgasms?
5
Did dragons exist?
20
Have cats hunted at least 33 species to extinction?
18
Did paleontologist Stan Taylor discover human footprints dated from the period of dinosaurs?
11
Have badgers eaten coyotes?
55
Did hominids and non-avian dinosaurs ever coexist?