A country consisting of an archipelago off the eastern coast of Asia. The islands' indigenous culture was largely supplanted after c. 600 bce by settlers from the mainland, who adopted an imperial system of government modeled on China's. After a long period (12th-19th century) of domination by a series of shoguns, feudalism was abolished on the restoration of the emperor Mutsuhito (1868) and the country was opened to trade with the West. Japan's industrialization and expansionism led to a series of wars, culminating in its defeat (1945) in World War II. After the war Japan's economy was rebuilt with American assistance, developing an industrial sector centered around automobiles and electronics. Tokyo is the capital and the largest city.

Word History: In 670 ce, during the early part of the Chinese Tang dynasty, Japanese scholars who had studied Chinese created a new name for their country using the Chinese phrase for "origin of the sun, sunrise," because Japan is located east of China. In the Chinese of the time (called Early Middle Chinese), the phrase was ŋit-pən'. To this the scholars added the Chinese word -kwək, "country," yielding a compound ŋit-pən'-kwək, "sun-origin-country, land of the rising sun." The consonant clusters in this word could not be pronounced in Old Japanese, and it became Nip-pon-koku or *Ni-pon-koku. The Modern Japanese names for Japan, Nippon and Nihon, come from the Old Japanese forms, minus the element meaning "country." Interestingly, the Chinese took to calling Japan by the name that the Japanese had invented, and the English name Japan ultimately derives from the Chinese version. In Mandarin Chinese, one of the descendants of Middle Chinese, the phrase evolved to Rìběnguó. Marco Polo records an early form of this as Chipangu, which he would have pronounced (chĭ-pän-go͞o) or (shĭ-pän-go͞o). The Chinese name was also borrowed into Malay as Japang, and in the 16th century, Portuguese traders borrowed the Malay name as Japão. The other languages of Europe probably adopted the name from the Portuguese. The first known use of Japan in English dates from 1577, when it is spelled Giapan. 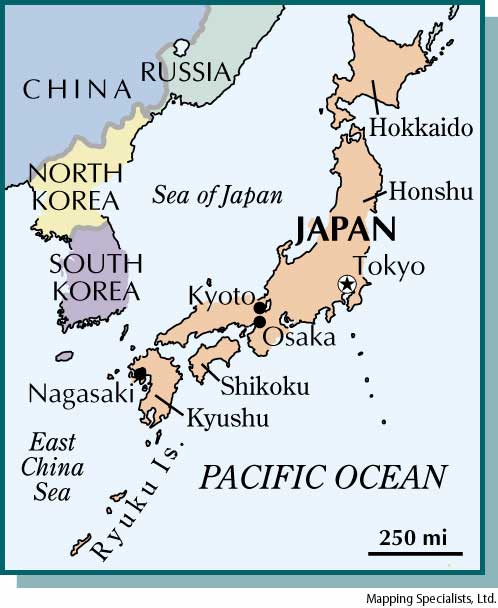 Are these claims about Japan’s health system true?

Did WWII Japanese soldiers engage in cannibalism of their enemies?

Are swastikas commonplace in Japan?