for questions about claims based in India, or limited to India.

India, officially the Republic of India (IAST: Bhārat Gaṇarājya) , is a country in South Asia. It is the seventh-largest country by area, the second-most populous country (with over 1.2 billion people), and the most populous democracy in the world. Bounded by the Indian Ocean on the south, the Arabian Sea on the south-west, and the Bay of Bengal on the south-east, it shares land borders with Pakistan to the west; China, Nepal, and Bhutan to the north-east; and Myanmar (Burma) and Bangladesh to the east.

In the Indian Ocean, India is in the vicinity of Sri Lanka and the Maldives; in addition, India's Andaman and Nicobar Islands share a maritime border with Thailand and Indonesia.

The National Flag of India is a horizontal rectangular tricolour of deep saffron, white and India green; with the Ashoka Chakra, a 24-spoke wheel, in navy blue at its centre. It was adopted in its present form during a meeting of the Constituent Assembly held on 22 July 1947, when it became the official flag of the Dominion of India. The flag was subsequently retained as that of the Republic of India. In India, the term "tricolour" (Hindi: तिरंगा, Tiraṅgā) almost always refers to the Indian national flag.

The flag is based on the Swaraj flag, a flag of the Indian National Congress designed by Pingali Venkayya. 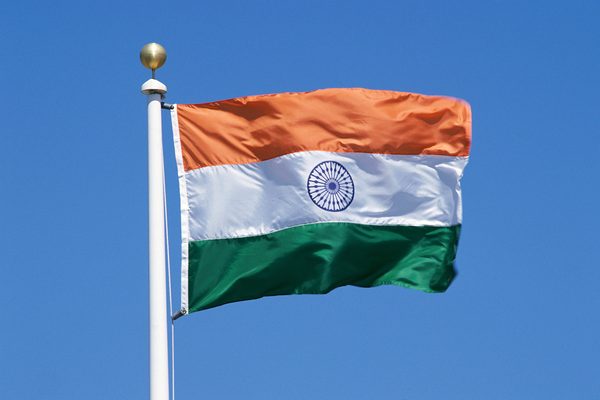 Have China and India more than doubled carbon emissions since 2000 while U.S. emissions have fallen?

Was this Indian from British India the first to strike Berlin during World War I?