Can we solve most blindness by cadaver donation? 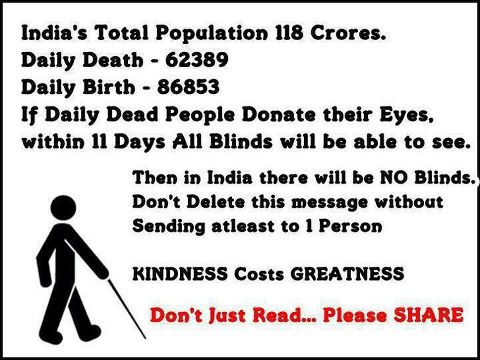 India's total population 118 Crores1.
Daily Death - 62389
Daily Birth - 86853 If Daily Dead People Donate their Eyes, within 11 Days All Blinds will be able to see
Then in India there will be NO Blinds.
Don't Delete this message without
Sending atleast to 1 person

This was shared in Facebook. The picture asserts that there are theoretically enough donors to solve most blindness in India.

The numbers suggest a maximum of 28% rejects. Does a good organ donation system make a decisive impact agaisnt blindness, given that all dead people cant give useful transplants?

The title of the question asks if most blindness solved by cadaver donation? The World Health Organization states that:

According to the latest assessment, cataract is responsible for 51% of world blindness [1]

So, cataracts are responsible for the majority of blindness. Cataracts are readily treated by replacement of the lens of the eye with an artificial intra-ocular lens made of a type of plastic.

Cadaveric eyes are only used to provide donor corneas ( transparent front part of the eye) for grafting. The lens of the cadaveric eye is not used.

Corneal blindness ( often monocular ) is the second most common cause of blindness, and figures about 1/4 that caused by cataracts [2]

Diseases affecting the cornea are a major cause of blindness worldwide, second only to cataract in overall importance. The epidemiology of corneal blindness is complicated and encompasses a wide variety of infectious and inflammatory eye diseases that cause corneal scarring, which ultimately leads to functional blindness. In addition, the prevalence of corneal disease varies from country to country and even from one population to another. While cataract is responsible for nearly 20 million of the 45 million blind people in the world, the next major cause is trachoma which blinds 4.9 million individuals, mainly as a result of corneal scarring and vascularization. Ocular trauma and corneal ulceration are significant causes of corneal blindness that are often underreported but may be responsible for 1.5–2.0 million new cases of monocular blindness every year.

However, the authors conclude that surgery is not cost-effective way of treatment, and most cases are actually preventable. Note also that corneal transplant requires the use of eye banks, and other sophisticated medico-surgical infrastructure.

The message is clear that medical and especially surgical intervention is not cost-effective in eliminating corneal blindness in developing countries. Prevention, in the case of almost every disease involved, is more cost-effective and ultimately more successful in decreasing the prevalence of blindness. Schwartz et al. estimated that 95.5% of all blindness in the population they studied in the Central African Republic was preventable or treatable

So, the answer to the question, is no. The message being passed around Facebook doesn't understand the cause of common blindness and the treatment.

Not the answer you're looking for? Browse other questions tagged medical-science ophthalmology india .

11
Can a lack of Vitamin A in your diet be statistically proven to be linked to worse eyesight?
27
Can blue light from LCD panels cause damage to the eyes?
20
Was most of western yoga invented in twentieth century?
10
Can the UltimEyes app improve distance vision?
5
Can daily disposable contact lenses be safely re-used?
10
Can we see a single candle X miles away?
20
Can a camera flash blind the eyes of a baby?