Did an F-15 airplane successfully land with just one wing?

I've just been forwarded a video about a jetfighter landing with just one wing and I wonder if this could indeed be true.

My understanding of flight is that the airplane would have started to spin out of control because the lift on the still intact wing would be much higher than on the other side, causing the plane to flip over without hope of recovery.

But then again this airplane has two vertical stabilizers and side rudders, also two rather big horizontal stabilizers. And jetfighters can fly upside down, anyway. So perhaps that, combined with the shape of the plane, would suffice to stabilize the flight somehow?

TL;DR; The F-15 is somewhat unique among current airframes, in that its body shape and size induce a certain amount of lift. That extra lift, along with the speed achievable with afterburners, allowed this aircraft to recover from an incident which would bring down most other aircraft.

The fact that we have a picture of this aircraft on the ground and intact, should be the first hint that this is no hoax. 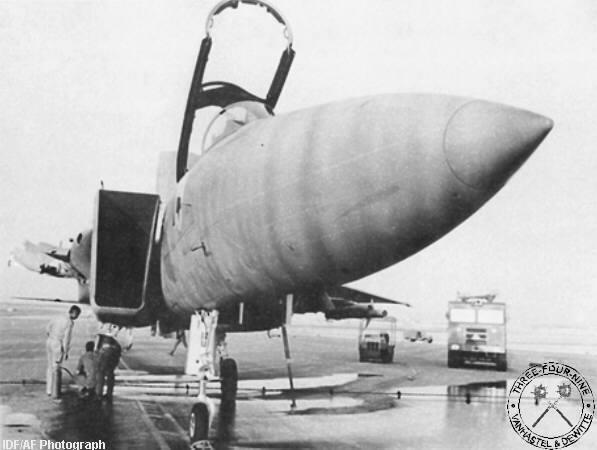 To quote the pilot, Zivi Nedivi:

At some point I collided with one of the Skyhawks, at first I didn't realize it. I felt a big strike, and I thought we passed through the jet stream of one of the other aircraft. Before I could react, I saw the big fire ball created by the explosion of the Skyhawk.

The radio started to deliver calls saying that the Skyhawk pilot has ejected, and I understood that the fireball was the Skyhawk, that exploded, and the pilot was ejected automatically.

There was a tremendous fuel stream going out of my wing, and I understood it was badly damaged. The aircraft flew without control in a strange spiral. I reconnected the electric control to the control surfaces, and slowly gained control of the aircraft until I was straight and level again. It was clear to me that I had to eject. When I gained control I said : "Hey, wait, don't eject yet!" No warning light was on and the navigation computer worked as usual; (I just needed a warning light in my panel to indicate that I missed a wing...)." My instructor pilot ordered me to eject.

The wing is a fuel tank, and the fuel indicator showed 0.000 so I assumed that the jet stream sucked all the fuel out of the other tanks. However, I remembered that the valves operate only in one direction, so that I might have enough fuel to get to the nearest airfield and land. I worked like a machine, wasn't scared and didn't worry. All I knew was as long as the sucker flies, I'm gonna stay inside. I started to decrease the airspeed, but at that point one wing was not enough. So I went into a spin down and to the right. A second before I decided to eject, I pushed the throttle and lit the afterburner. I gained speed and thus got control of the aircraft again.

Next thing I did was lower the arresting hook. A few seconds later I touched the runway at 260 knots, about twice the recommended speed, and called the tower to erect the emergency recovery net. The hook was torn away from the fuselage because of the high speed, but I managed to stop 10 meters before the net. I turned back to shake the hand of my instructor, who had urged me to eject, and then I saw it for the first time - no wing !!!

As to answering how this aircraft was able to stay airborne with little of its starboard wing intact, the source above hints at the answer:

McDonnell Douglas attributes the saving of this aircraft to the amount of lift generated by the engine intake/body and "a hell of a good pilot".

Looking into this a bit further shows that the wide-fuselage design of the F-15 indeed provides a certain amount of lift on its own:

Fighters like the F-15 Eagle also produce substantial lift from the wide fuselage between the wings. Because the F-15 Eagle's wide fuselage is so efficient at lift, a F-15 was able to land successfully with only one wing, albeit under nearly full power, with thrust contributing significantly to lift.

The last line there being important - lift increases proportionately to thrust:

So although initially the aircraft entered a descending spiral (presumably for much the reason you stated - differential lift from the intact vs missing wing), the pilot was able to stabilise this by increasing his airspeed to generate enough lift to halt the descent, and enough airflow over the control surfaces (ailerons & rudders) to halt the spin.

"Hell of a good pilot" appears to be the understatement of the century! This guy now attains the "Sullenberger" level of pilot-awesome for me.

41
Did removing one olive lead to an airline saving thousands of dollars?
8
Did one Avro Arrow (CF-105) avoid being scrapped?
8
Did two people in jetpacks fly with an A380?
1
Did the US / UK supply the Russians with machinery before or during the Cold War?
10
Did an Indian man make an airplane or flying device in 1895?
4
Did anyone ever do a round trip with a Concorde in a single day?