Do birds eat chewing gum they think is bread? 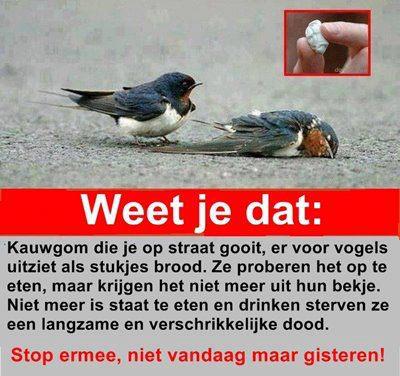 This image popped up in my facebook feed today. Roughly translated it says that chewing gum thrown on the street might be seen as pieces of bread by birds. The birds will then eat it, but it gets stuck. Because of that they are no longer able to eat or drink and will die a "long and horrible death".

It was pointed out already that the species of birds in the picture actually eat insects and rarely walk around on the ground. But I'd like to know how the above mentioned theory applies to birds that do eat bread.

The basis for both Hoax-Slayer's and Snopes' debunking efforts is a video on YouTube where "CBS 21 News takes a viewer question to local wildlife experts". The question is as follows:

"My wife says that if you throw gum on the street, a bird will eat the gum and die from it. Will a bird attempt to eat the gum?"

The wildlife experts responded as follows:

"After careful consideration and discussion among our zoo staff, Here is our conclusion. Chewing gum, in and of itself, is not and would not be a fatal substance for a bird to ingest and may draw some birds' interest. However, there are many variables, and we know better than to say anything could never happen. It is conceivable that a very small bird could attempt to eat a very large piece of gum. Obviously anything that might be large enough to lodge in an airway, be it bird or human, can be a problem."

"The birds we have here at the park, it's unlikely that they would even try to eat it. They might peck at it once or twice, and realize it's not something they want to eat. We've never had a bird die from eating gum."

While I've come across a few sites that state that gum containing artificial sweeteners such as Xylitol could be dangerous to birds, I've found nothing to back this claim. Such sweeteners are definitely dangerous to dogs. It is very likely that this fact has subsequently been exaggerated to include all pets.

Lastly, while the OP has noted that the birds in the image are insectivorous and would therefore not be interested in bread, Snopes also notes that the image itself is a rehashed photograph:

First off, the picture displayed above has nothing to do with a bird's dying from eating a piece of discarded gum. It's one of a sequence of much-circulated photographs from 2009 which was said to show a swallow who refused to abandon his mate after she was hit by a car and subsequently died.

In summary, there appears to be nothing in particular about chewing-gum that, if ingested by birds, will upset their digestive systems or similar. There is also no credible evidence that birds will even be interested in it. There is a small chance that small/young birds might choke on discarded gum. But this hazard is no different to them choking on a large nut and therefore does not really warrant any serious concern.

Not the answer you're looking for? Browse other questions tagged mortality ethology birds chewing-gum .

106
Is eating rice harmful to birds?
14
Will swallowed gum stay in your stomach for 7 years?

25
Will cats eat their deceased owner, but dogs will starve to death instead?
23
Might organ donors be harvested when they could have otherwise lived?
21
Does chewing on gum help clean your teeth?
19
Were birds used for communication historically?
106
Is eating rice harmful to birds?
12
Do roosters let hens eat first?