Can a single cup of coffee help a person to wake up and be more focused?

There are many examples of people claiming they need their morning cup of coffee in order to be able to function at their normal level:

Like many early morning risers, I need my morning cup of coffee to get my brain going.

Read This Article if You Must Have Your Morning Cup of Coffee:

Does Coffee Take Away Blood Flow to the Brain?

Coffee is a staple drink of the morning, particularly for people who are tired and need a boost of energy to get going.

Does a single cup of (non-decaf) coffee drank in the morning have a real physiological effect that would aid in waking up and increasing concentration? Or is the morning cup of coffee ritual perhaps something closer to a placebo like effect?

Yes it does, and there is plenty of evidence to support this fact.

In a recent review of 41 studies, Ruxton (2008) finds consistent evidence that doses of coffee less than and equal to what might be found in a cup of coffee provide "improvements in physical endurance, cognitive function, particularly alertness and vigilance, mood and perception of fatigue." Here is the abstract (with bits about a secondary hypothesis related to hydration replaced by '...':

The reputed benefits of moderate caffeine consumption include improvements in physical endurance, cognitive function, particularly alertness and vigilance, mood and perception of fatigue... This paper is a review of double-blind, placebo-controlled trials published over the past 15 years to establish what range of caffeine consumption would maximise benefits and minimise risks for cognitive function, mood, physical performance and hydration. Of the 41 human studies meeting the inclusion criteria, the majority reported benefits associated with low to moderate caffeine intakes (37.5 to 450 mg per day)... It was concluded that the range of caffeine intake that appeared to maximise benefit and minimise risk is 38 to 400 mg per day, equating to 1 to 8 cups of tea per day, or 0.3 to 4 cups of brewed coffee per day. The limitations of the current evidence base are discussed.

Another systematic literature review by Glade (2010), in which most effects were observed at doses were in the 50-200mg range (referred to as moderate), concludes:

A summary of the studies on which the above conclusions are based can be found in table 2 of the Ruxton reference, the first page of this table is shown below: 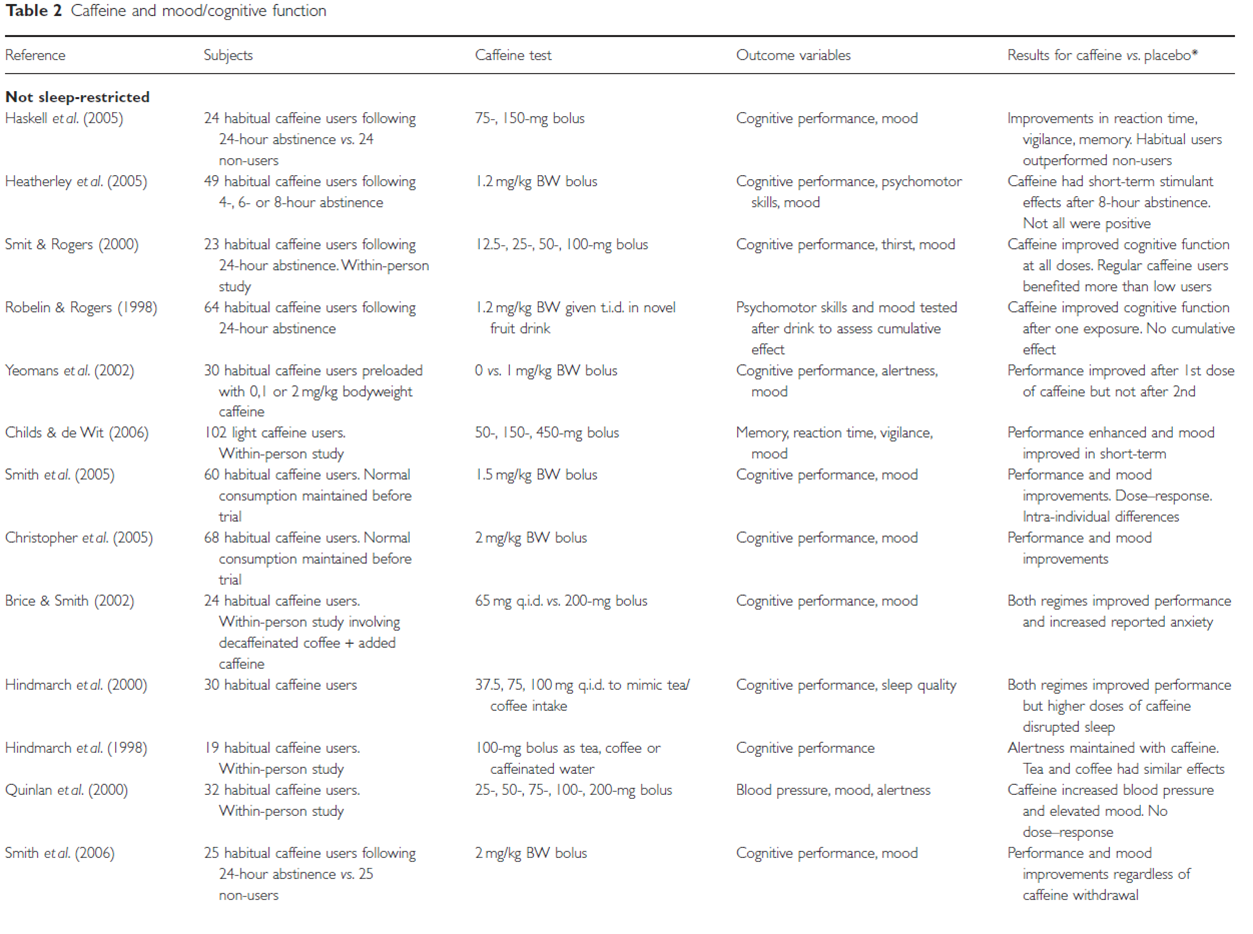 There are a few studies that suggest that drinking coffee is just a placebo effect or the reversal of caffeine withdrawl.

Frequent coffee drinkers develop a tolerance to both the anxiety-producing effects and the stimulatory effects of caffeine. While frequent consumers may feel alerted by coffee, evidence suggests that this is actually merely the reversal of the fatiguing effects of acute caffeine withdrawal. And given the increased propensity to anxiety and raised blood pressure induced by caffeine consumption, there is no net benefit to be gained.

People who drank the decaf coffee thinking it was caffeinated coffee did just as well on the tests as the people who really did have the caffeine...Both caffeine and expectation of having consumed caffeine improved attention and psychomotor speed," researchers wrote in the study.

Not the answer you're looking for? Browse other questions tagged nutrition physiology coffee .

69
Is the placebo effect a purely psychological effect?