Was Kursk sunk by USS Memphis?

On of the theories in the Kursk incident suggest that it was sunk by USS Memphis following the collision with USS Toledo. Theory has originally surfaced in 2005 film, but lately allegedly there are some leaks from Russian Navy officers confirming it.

French filmmaker Jean-Michel Carré, in Kursk: a Submarine in Troubled Waters, which aired on 7 January 2005 on French TV channel France 2, alleged that Kursk sank because of a sequence of events triggered by a collision with a US submarine. Carré claimed that Shkval torpedo tests were being observed by two US submarines on duty in the region: USS Toledo and USS Memphis. According to his version, these observations eventually led to a collision between USS Toledo and Kursk. Carré theorized that neither of the subs was seriously damaged in this incident, but the sound of the collision, combined with sounds of loaded torpedo tubes, made the captain of USS Memphis believe that Kursk was preparing an attack on USS Toledo, so he launched a pre-emptive strike against Kursk with a MK-48 torpedo. According to Carré, this attack was successful and was the cause of the powerful explosion within Kursk's hull, sinking the submarine and leaving Memphis and Toledo slightly damaged. Carré claimed that specific damage visible on the Kursk hull was the main evidence of this version, including signs of an initial collision, and a hole left by the torpedo when it entered the Kursk hull. He also claimed that a damaged submarine was sighted leaving the Kursk incident area, and USS Memphis was sighted soon afterwards being repaired in a Norwegian port.

In below screen capture you can see a round hole, which allegedly is point where torpedo penetrated the hull. 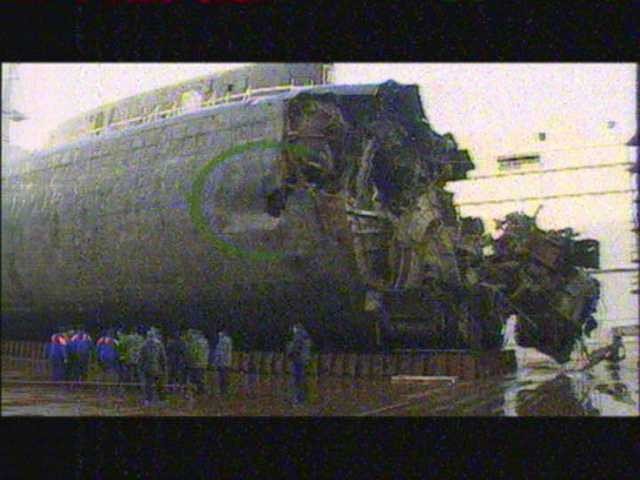 There some additional photos of this round hole at this page (in russian):

Good quality shoot from unknown source. Text in russian is: "А что значит это отверстие в правом боку подводной лодки" - "And what is meaning of this hole in right side of the submarine". It is clearly seen that hole has very sharp edges on its top and left sides. Also we can see that hole is not round in its low-right side (as it was required in comments, taken from other angle): 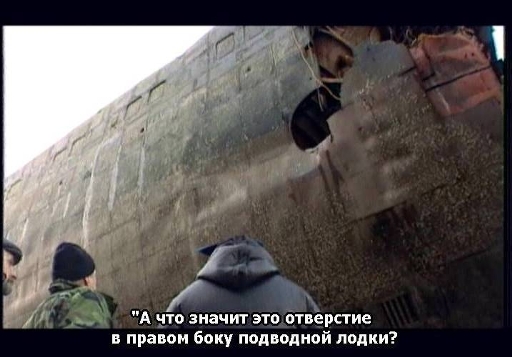 This is a copy from the TV-film discussed ("Kursk: a Submarine in Troubled Waters"): 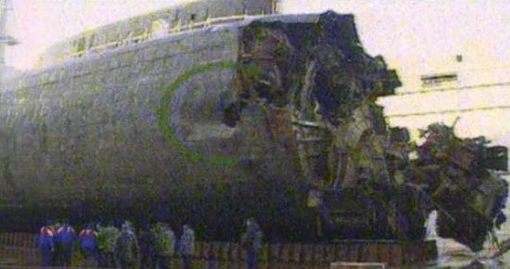 This photo is labelled: "пресс-центр ГП РФ"; "ГП РФ" is abbreviation for "Генеральная Прокуратура Российской Федерации", so "Press-center of Prosecutor General’s Office of the Russian Federation" (press center of Federal Attorney of Russia): 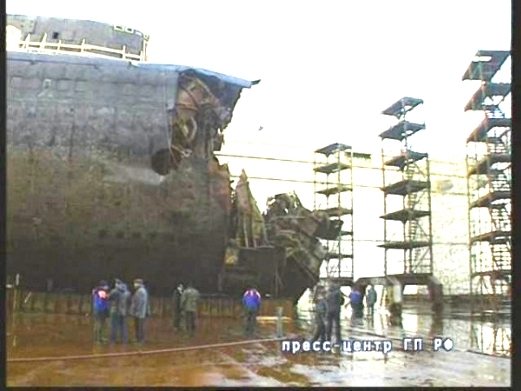 This photo has date mark on it "24' 4'02" = 24.04.2002 and text "район прочного корпуса напротив которого отверстие в легком корпусе. никаких пробоин нет" = "region of strong hull (=inner hull=pressure hull) opposite of which hole in light hull (=external hull) /is located/. There are no any breaches": 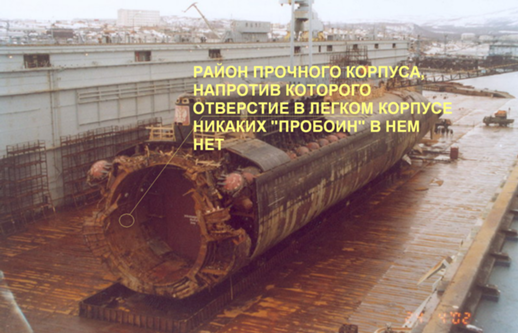 And finally is frame with labels "росляково. мурманская область. РТР". It has label of Russian federal channel RTR. According to the page, Carre says that this hole was not shown on TV, but it was: 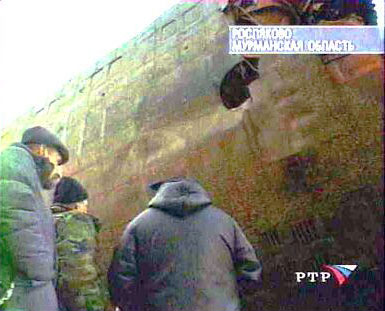 There is interesting phrase on military history forum "vif2ne":

Subject: Round hole on Kursk

Commander-in-chief /of the Navy/ clarified that hole was cut by divers early as in previous year /2000/, no any relation is possible to hypothetical collision or to torpedo attack. The hole will be welded now to limit more of myths :-)))

With respect to the community.

Other phrase is on federal newspaper forum

In "Rubin" (=Rubin Design Bureau, operator of the Raising operation of Kursk) I was told about this hole: was technological incision

Round hole between first and second compartments, which was seen by millions of TV viewers at the time of airing of film by Chief Military Prosecutor Office, turns out to have artificial origin: part of hull was cut in previous year (=2000) at the request of the Commander-in-chief /of the Navy/ (=Vladimir Kuroedov). When it will be returned in place for investigative purposes, much may become clearer, Kuroedov hinted.

A torpedo does NOT penetrate the hull of a target vessel, it will have a proximity fuse with possible backup contact fuse and probably a timer fuse as well. So that's one claim already debunked.

Wikipedia on the Mark 48 Torpedo

Can't find independent verification of this (it's most likely classified what exact fuzing modes exist), but it is consistent with knowledge I have accumulated over the years about torpedoes from several post-WW2 designs (WW2 and earlier designs typically used contact fuses).

The MK 48 ADCAP torpedo is a submarine launched, heavyweight acoustic homing torpedo with sophisticated sonar and an influence-fuzed warhead. The improved ADCAP torpedo includes all digital guidance and control systems, digital fusing systems, and propulsion improvements, which add speed, depth, and range capability. The Mk 48 class torpedoes are the Navy's only submarine launched torpedoes used for engagement of submarine and surface targets, contributing significantly to the submarines' precision engagement. They are also essential to the force protection role of submarines. There are a number of upgrades to the ADCAP torpedo discussed in the following paragraphs.
Every seemingly interesting bit of detail ends after a few words with: More details are provided in the classified version of this report.

This Powerpoint presentation (unreferenced, but with photographs) shows the effect of a Mk.48 torpedo detonating to sink an old frigate. Compare the damage done by the warhead exploding under the ship to the supposed "entry hole" :)

As to the collision claim, collisions between submarines have happened in the past so might have happened here, but are highly unlikely to lead to the ships sinking. And if one were to sink, I'd expect the smaller, lighter built one to sink which would be the US submarine. (The Kursk is a lot larger than a US (or Soviet/Russian) fast attack sub.)

While there are many mysteries surrounding the sinking of the K141, like why the explosion wasnt investigated when it was first detected by the Peter the great, why the underwater rescue vessel had not been tested on the hull of the Kursk (which was fitted with 8 inches of acoustic rubber) and why the Russian officials lied and said first off that it was only a malfunction and that they had established communications etc. which understandably makes anything released by them in future questionable, the acoustic data recorded by several stations across alaska and europe all tally with the actual damage found on the K141.

The collision theory is rubbish, the size of the K141 in relation to a Los Angeles class or a Swiftsure class submarine, would mean the Los Angeles of Swiftsure would have been completely destroyed by the collision, if not, so damaged it would have had to surface. The reports of the Memphis being damaged are also clearly rubbish. It docked in Norway several days later, right opposite a big housing estate in Bergan, clearly visible to all and sundry. If it was damaged in an incident of this nature, i would have been hidden away in the dry dock cut into the mountain, which was only a mere hundred or so yards away in the same port, and hidden well away from prying eyes.

The torpedoing theory is also rubbish. the American MK48 torpedo, when tested by the Australian navy on a decommissioned destroyer, thats right, a destroyer, tore the ship in half, right down the middle. there was no little hole entry followed by the devastation zone, just a big explosion impact zone followed by a big crack the width of the destroyer (google it, you'll see what i mean) any MK48 torpedo that would have hit Kursk would have totally obliterated it, not just caused damage to the forward 5 sections.

This in turn caused a fire that super heated the forward cabin to a temp of between 2000 and 5000 degrees, which in turn caused the fatal explosion of the other 4-8 torpedoes.

Either that, or it was due to a 'Shkval' torpedo misfiring. a 'Shkval' is a supercavitating torpedo that reduces water resistance by producing a gas bubble around the torpedo, which minimises water resistance. The Shkval is rocket powered and can likely achieve speeds in excess of 370 MPH, making it almost impossible to defend against.

It is theorised that the rocket motor fired whilst still in the tube and before the tube had been flooded, causing the first explosion picked up by the acoustic data when the hatch door was blown off (the hatch door was found embedded into the rear bulkhead of the torpedo room confirming the was some sort of explosion in the tube) this then superheated the chamber and caused a number of the remaining conventional torpedoes to 'cook off' and explode

This was the event that registered 3.5 on the richter scale and was picked up over several thousand miles.

Of course, the Russian government has never actually announced that they were testing a new type of shkval that day, but then, if they were, they would hardly announce it, even after the accident.

Occum's razor suggests that the simplest answer is most often the correct one. And i'm afraid, that in the case of the K141, this actually is the case. Somewhere between the official HTP explosion explaination and the unofficial Shkval explosion theory, is likely the truth. But either way, have no doubt that it WAS a torpedo explosion in the tube that caused the Kursk's sinking, both the acoustic and the physical evidence prove that beyond doubt.

Although given the Russian governments attempt at covering things up and lying at the beginning of the whole saga, i can totally understand why people think there is more to it that.

Not the answer you're looking for? Browse other questions tagged history weapons military .

20
Was Iran Air Flight 655 shot down by mistake?
4
Was SS Californian intended to be a rescue vehicle for the passengers of a deliberately-sunk Titanic?
22
Was Russian Su-24 fighter able to disable electronics aboard USS Donald Cook and thus lead to personnel aboard the ship to resign?
3
Does the USS Carl Vinson aircraft carrier have unlimited distance range?
10
Did the North Korean Navy sink the heavy cruiser U.S.S. Chicago by torpedo boat in 1950?
16
Was the Browning Automatic Rifle kept from US troops during WWI?
64
Was the German V2 rocket the only weapon whose production killed more than its use?
2
Was the Polish army the fifth largest in 1939?
10
Did the USS Buck (DD-761) send the message "Temper, Temper"?