What percent of time is a rocket to the moon on the right trajectory?

I heard the following quote: "A rocket to the moon spends only 7% of the time on the correct course, the rest of the time it is off course and needs to be corrected and put back on course."

This is a nice anecdote in relation to how important it is to keep correcting your own course in life, have a destination in mind but keep checking if you are on course and correct.

The Apollo moon rockets were off course 97% of the time. Yet they still reached their chosen destinations – and returned to earth – with pin-point precision and timing.

Source: Don't Go Into Small Business Until You Read This Book by John Counsel

Did you know that an Apollo rocket is actually on course only two or three percent of the time? At least 97% of the time it takes to get from the earth to the moon, it’s off course. Put another way, for every half hour the ship is in flight, it is on course for less than sixty seconds.

They are nice examples but are they really true. Where would these percentages come from?

moon physics
Share
Improve this question
edited May 3 '12 at 1:00

This image shows the Apollo 13 timeline, derived from the official log:

As you can see, they only course-corrected four times over the course of the 143-hour mission.

The Apollo 11 mission had five scheduled course corrections, three of which were considered unnecessary by mission control when the window arrived. Of the two course corrections that actually occurred, one was only a three-second burn and the other doesn't specify how long it lasted.

So no, I wouldn't say they were only on course 3% of the time.

Because of the incredible cost of getting propellant out of the Earth's gravity, I am pretty certain the moon rockets were almost always perfectly on course, with occasional corrections.

According to NASA, the launch phase gets the Apollo rockets to Earth's orbit, then there is a burn to join what they call the Trans Lunar Coast Phase, during which no propellant is expected to be fired. The next burn is at the Moon end to join a Lunar orbit.

The calculations on that page are all about making sure the phases line up with the minimum burn required to transition from one to the next, which is why launch windows are so critical.

One of the indicative diagrams from that page. 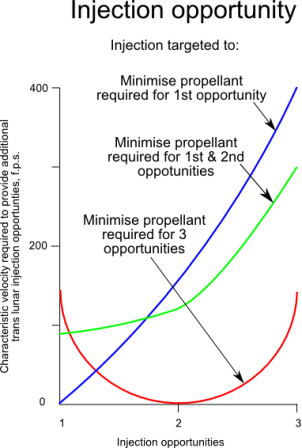 A comparison of lunar landing strategies can be found here. Again, it is heavily focused on savings in propellant, or as they state it, delta V (change of velocity):

... the TLI maneuver for the WSB is greater than for the standard ballistic transfer, there can be a lunar capture DV savings of about 25% when capturing into a Lunar orbit. The Hiten mission 17 (originally called Muses-A) performed such a capture in October, 1991

Not the answer you're looking for? Browse other questions tagged moon physics .

224
Has man walked on the Moon?
17
What is the reason that the moon appears larger on the horizon?
30
Is the Moon young?
20
Did astronauts leave footprints on the moon?
1
Is the moon artificial?
8
Do Qur'an verse counts correspond to the moon landing date and take-off time from the surface of moon?
125
Did US flags on the moon turn white?