Is home birthing as safe as in-hospital births for low risk mothers?

I came across the following page, describing "The Farm"'s midwifery statistics: http://www.naturalbirthandbabycare.com/farm-statistics.html

That page wasn't that convincing. The only statistic that it directly compared against conventional birthing is the rate at which caesarian section is performed. That fewer c-sections are done is marvellous, but it doesn't prove that it's safe.

However, I clicked on a link from that page to http://www.naturalbirthandbabycare.com/home-birth.html , which talks about a paper published in BMJ: Outcomes of planned home births with certified professional midwives: large prospective study in North America. That paper doesn't seem to be looking at maternal mortality, but says that other research has already shown that home birthing for low risk mothers has similar safety to low risk hospital mothers.

So, is home birthing with midwives is as safe for low risk mothers as in-hospital ones?

No, home birth is substantially more likely to result in the death of the baby, even with a qualified homebirthing midwife.

Most of the pro-homebirth articles and studies focus on the reduction in medical interventions taken for the mother (cessarians, etc), which I will leave to the reader to decide if that's more important than the life of the baby.

More and more American women (1 in 200) are opting for home birth, and midwife-assisted home birth is common in other developed countries. How safe is it compared to birth in a hospital? A new study sheds some light on the subject. It was recently published in the American Journal of Obstetrics and Gynecology: Maternal and newborn outcomes in planned home birth vs planned hospital births: a metaanalysis, by Wax et al. ...

CONCLUSION: Less medical intervention during planned home birth is associated with a tripling of the neonatal mortality rate.

Similar findings from the 2003-2004 CDC data (the US birth certificate was revised in 2003 to include the location and attendant at the birth): http://www.sciencebasedmedicine.org/index.php/the-tragic-death-toll-of-homebirth/ 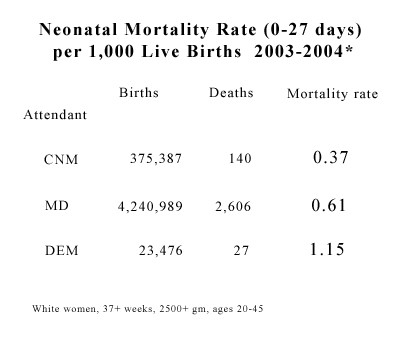 The subject is matter of debate, at least in The Netherlands, where home-birthing is very common. A Dutch-language blog article links to a number of studies which different conclusions. In 2010, a study was published concluding that homebirthing is more risky:

However, the study was criticised at a number of points. From

Given the limitations of the study, the conclusion that labour starting in primary care carries a higher risk of delivery related perinatal death compared to labour starting in secondary care is premature from a scientific point of view.

So, it's probably not at all easy to answer the question.

Not the answer you're looking for? Browse other questions tagged medical-science birth .

11
Are hepatitis B vaccines for newborns safe and cost-effective?
27
Does eating meat increase your risk for cancer?
14
Is mycoprotein (Quorn) safe for human consumption?
9
Recommendation of the Canadian Paediatric Society to never clip tongue ties for breastfeeding
4
Could some pacific fish (export, or migratory) be dangerous for those at-risk of certain cancers?
17
Did Nutrasweet industries pay for 100% of the research showing aspartame is safe?
5
Is Triclosan safe for use in toothpaste?
18
Are activities in which both people bleed on each other considered “No Risk” for the transmission of HIV?