There seems to be a scientific consensus that glaciers are melting.

However, some glaciers are growing:

Glaciers in parts of the greater Himalayas are growing despite the worldwide trend of ice melting due to warmer temperatures, a study has found. The site Ice Age Now lists many more.

Do these finds show that glaciers are, overall, not shrinking?

No. The estimated rate of change in the mass of glaciers in the Himalayas is 3+/-6 Gt/year. (1 Gt = 109 tonnes = 1012 kg.) Given this level of uncertainty, it is not certain that they are growing. The global rate of mass lost from glaciers overall is closer to -500±100 Gt/y (from Jacob et al 2012), which is much greater in magnitude than the changes observed in the Himalayas.

Do these expanding glaciers show that there has not been any global warming?

No. Global warming is observed directly as the increase in surface temperature over time (e.g. see Is the world warmer now than during the Medieval Warm Period?). The effects of global warming, including melting glaciers, do not affect conclusions whether or not the warming is actually occurring. But the global declines in ice mass are consistent with what is expected to occur in a warming world.

Glaciers lose mass through melting, ablation, and calving. In the popular press, the term "melting" is used to account for all three. Thus, saying that the glaciers are 'melting' is used as a way of saying that the amount of ice in the world - the size of the cryosphere - is decreasing.

The mass of a glacier is dynamic - it changes through time: mass is lost to melting etc. and mass is gained through precipitation of ice and snow. A nice overview of glacial dynamics is provided by the IPCC (IPCC 2007 section 4.5.1).

In section 4.5.2, The IPCC concludes that the global mass of glaciers is decreasing. According to a recent estimate that is based on satellite measurements of changes in the earth's gravitational field, the cryosphere is losing ~500±100 Gt / year of water per year (Jacob et al 2012).

Although not every single glacier is decreasing in size, the overall trend is decreasing. Jacob et al provide a nice synthesis of the variability among different parts of the cryosphere, as shown in the figure and table below. 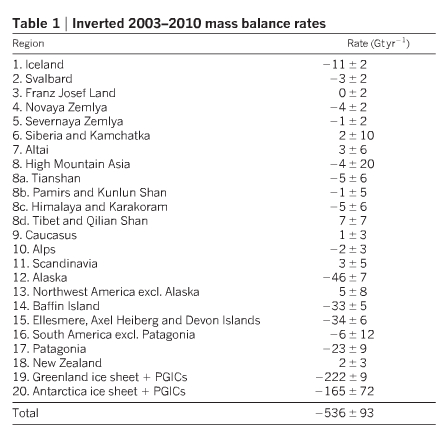 14
Will melting icecaps and glaciers cause the ocean to rise?
23
Is the world warmer now than during the Medieval Warm Period?

18
Could Global Warming be good for life?
21
Are the 16 scientists who claim that climate change is not something to worry about climate scientists?
12
Are the specific claims from the "WSJ 16" climate skeptics true?
7
Has the Urban Heat Island effect on the US temperature record been underestimated?
22
Is climate close to a "tipping point"?
13
Are fossil fuels making the world greener?
31
Is it accurate to say that 97% of experts agree that global warming is anthropogenic?
78
Do Milankovitch Cycles fully explain climate change?
3
Why did the value for "average surface temperature of Earth" change from 15°C to 14°C in some scientific literature concerning climate change?