Does removing the seeds from chilli actually reduce the heat? Is there any difference to just using less chilli?

The seeds and flesh of the chilli can both be eaten, but cooking chillies does not reduce the intensity of capsaicin; only removing the seeds and veins will lessen their heat.

Not really a myth, but technically incorrect. 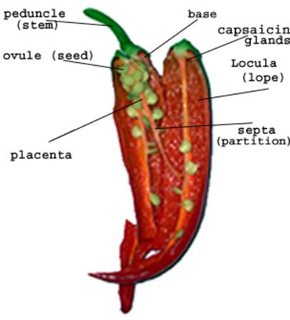 Within the pepper fruit, capsaicinoids mainly accumulate along the epidermal cells of the interlocular septum, which deﬁnes the fruit locules and is derived from the tissue connecting the placenta to the pericarp.

Capsaicin is present in large quantities in the placental tissue (which holds the seeds), the internal membranes and, to a lesser extent, the other fleshy parts of the fruits of plants in the genus Capsicum. The seeds themselves do not produce any capsaicin, although the highest concentration of capsaicin can be found in the white pith of the inner wall, where the seeds are attached.

Q. Where does the "heat" reside in the chile pepper? Many claim it is ALL in the seeds. I have also heard that the capsaicinoids are stored in the membranes of the chile.

9
Do "naturally raised" animals contain less bacteria?
17
Does drinking while eating impair digestion?
38
Does your stomach shrink if you eat less?
18
Is cooked protein less digestible than raw protein?
7
Do the types of food affect a calorie restricted diet?
6
Can domestic cats be healthy as vegetarians?
7
What are the effects of a Big Mac on our bodies?
9
Is eating food with your bare hands more tasty?