Do the Mediterranean and Strait of Gilbraltar have scientifically explicable different salinities, flora and fauna?

I am curious about a phenomena (supposedly confirmed by J. Cousteau) that is said, by a Facebook page, to support some quotes in the Quran.

9- He has let free the two seas meeting together.

20- Between them there is a barrier which they do not transgress.

55-Gracious, 19-20 A famous French oceanographer, J. Cousteau, gives the following account as a result of his studies in water barriers: J.Cousteau “We studied the assertions by certain researchers about barriers separating seas, and noticed that the Mediterranean Sea had its own salinity and density and housed autochthonous fauna and flora. Then we examined the water of the Atlantic Ocean and discovered features entirely different from those of the Mediterranean Sea. According to our expectations, these two seas that merged in the strait of Gibraltar should present similar characteristics in terms of salinity, density and other properties.Gibraltar The two seas presented different features even though they were adjacent. This greatly puzzled us. An incredible barrier prevented the two seas from coming together. The same sort of a barrier had also been observed in Bab Al-Mandab in the Gulf of Aden connecting with the Red Sea.

Subsequent to our observations, further researchers made it clear that the seas which had different characteristics had some barriers.” This fact that astounded oceanographers was revealed 14 centuries ago in the Quran. This aspect, not visible to the naked eye and appearing to be in conflict with the properties of water known to man, was first revealed to men in the Arabian peninsula, men who were not at all experienced in any sense with oceanography.

If anyone could confirm this and explain why it is so, I would really appreciate it.

Related Question: Is there a place in the world where two oceans meet and they don't mix? (About the same part of the Quran, but with different evidence.)

Ah, not only are there liars for Jesus, be there are liars for Mohamed... I will note that the facebook page claims that Cousteau converted to islam. That is false. This page (in French) addresses that.

Now, about the specific claims in oceanography that there is no mixing, this is patently false. The Straits of Gibraltar do not provide any sort of barrier that is impassable. What you have here is a different ecological niche, much like you have on land. From the abstract (emphasis mine):

The geological history of the Mediterranean Sea, its hydrography and connection with the Atlantic Ocean have been well documented. Despite a wealth of historical and oceano-graphic data, the Atlantic–Mediterranean transition remains controversial at the biological level as there are discordant results regarding the biogeographical separation between the Atlantic and Mediterranean biota. The opening of the Strait of Gibraltar at the end of the Messinian Salinity Crisis (some 5.33 million years ago), removed the land barrier that impeded the marine biota allowing it to disperse freely into the Mediterranean Sea. How-ever, present day genetic patterns suggest a limitation to gene flow for some marine species,preventing population admixture. In the last few years, a large number of studies have challenged the hypothesis of the Strait of Gibraltar representing a phylogeographical break. A review of more than 70 papers reveals no obvious relationship between either dis-persal ability or life history, and observed patterns of partial or complete genetic isolation between Atlantic and Mediterranean populations. We re-analysed a selection of this large body of data (20 studies in total) in order to provide a homogeneous and coherent view on the generality of the phylogeographical patterns and the presence of a phylogeographical barrier. This offered the opportunity to summarize the state of the art on this matter and reach some general conclusions on the evolutionary history across the Atlantic–Mediterranean range. Geographically, some species in the transition zone showed step changes of allele frequencies associated with the Almeria-Oran Front rather than with the Strait of Gibraltar itself. A major part of the data describe evolutionary events well within the time frame of the Quaternary age as very few taxa pre-date closure of the Tethys Sea. Results point to a combined signature of vicariance, palaeoclimate fluctuation and life-history traits on the Atlantic–Mediterranean phylogeographical patterns. Principal component analysis failed to show any particular association between biological traits and genetic variables.It would argue that organismal determinism may play a far less significant role than marinebiogeographers have generally believed

High rates of evaporation in the relatively shallow Mediterranean basin cause the water to become saltier, and thereby denser, than the relatively fresh Atlantic water. As Atlantic water is forced through the narrow strait it accelerates and interacts with Mediterranean water. Internal waves (particularly those formed at depths of 60–80 meters) develop where these two different water masses interact. Large, tidally induced pulses of Atlantic water entering the Mediterranean can be seen here as a series of crescents emanating from the strait. These crescents result from interactions of these different water masses at depth.

This picture shows the actual effect of this inflow: 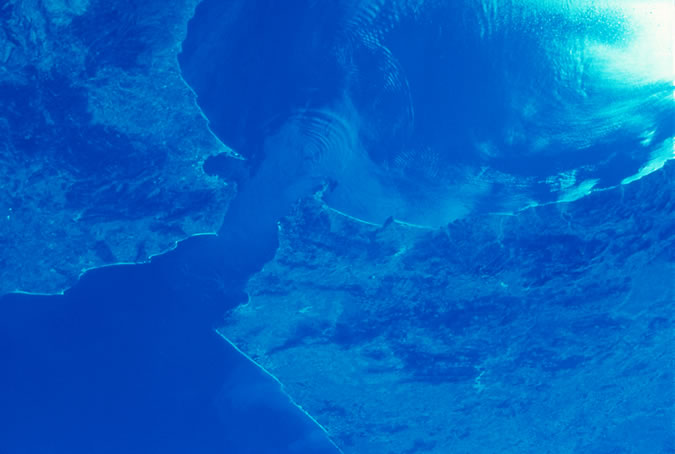 So if anything, there is a massive inflow and mixing. Just not at a biological level as detailed above. Although, Woods Hole Oceanographic Institute has a paper (PDF) where there is indeed mixing. As well as a paper by University of Maryland (PDF).

Again, all it proves is that the Atlantic is a different ecological niche than the Mediterranean. Mountains and prairies don't particularly mix (nor the flora and fauna at each environment), although there is a huge range through the middle of the North American continent where they are next to each other.

Not the answer you're looking for? Browse other questions tagged religious-texts oceanography quran .

41
Is there a place in the world where two oceans meet and they don't mix?
30
Did the Quran predict the speed of light?

41
Is there a place in the world where two oceans meet and they don't mix?
9
Do the key Abrahamic holy books claim that their god is omnipotent, omniscient and omnibenevolent?
13
Is the ninth wave the largest?
6
Did the Qur'an predict the defeat of the Persians at the Battle of Issus?
6
Have there been any fatalities caused by octopi?
30
Did the Quran predict the speed of light?
13
Is there a 2.5 mile diameter object crawling along the Pacific floor?