Does recycling protect our resources?

In the essay Eight Great Myths of Recycling, Daniel K. Benjamin (formerly a Professor of Economics at Clemson University) lists a number of misunderstanding related to recycling, including specifically:

Trees are renewable, but what about nonrenewable resources such as fossil fuel? Here, too, there is no reason to fear that we will run out.

Are the authors claims about "never running out" of resources justified as a reason not to recycle?

This specific part of the author's argument is economic. The argument seems to take roughly the following form:

I see some problems with this argument.

First, economic efficiency is a tool, not a master. It is used to produce good. It's trivial to find examples where economic efficiency produces suboptimal human outcomes. It is wrongheaded to assert that because something is economically efficient that it is therefore good.

It can therefore be argued that letting resources get rare and expensive and being economically forced to use something else is not necessarily the optimal outcome.

Second, isn't recycling one of the alternatives he thinks will naturally arise? The costs of resources are going up, not necessarily to the immediate producer or consumer, but to society. Society considers the costs and externalities of continued direct resource extraction and decides cooperatively to recycle more and extract less. I fail to see the logical fallacy.

This is a great example of the pitfalls that arise from relying on economic costs to drive shifts in resource utilization. Those costs are frequently either not easily recognized by the decision-maker, or are externalized to someone else. As Michael Greenstone and Adam Looney of the Hamilton Project note in the realm of energy,

the status quo is characterized by a tilted playing field, where energy choices are based on the visible costs that appear on utility bills and at gas pumps. This system masks the “external” costs arising from those energy choices, including shorter lives, higher health care expenses, a changing climate, and weakened national security.

Their example is electricity, but the principle applies to any resource or scarce good. They quantify energy costs, including external ones: 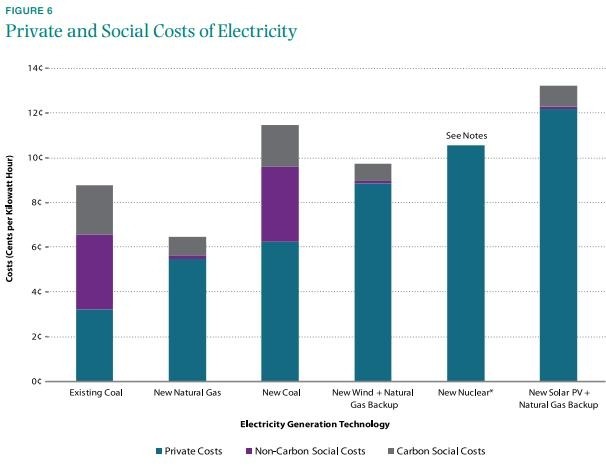 So purely rational economic actors, per Benjamin's model, will choose poorly due to externalized or unaccounted costs. In this way, alternative resources that are cheaper in fact might be eschewed because they appear more expensive. For example, recycling to conserve energy, land, or resources might be the most cost-effective choice, but since those costs are spread out across society (and perhaps concentrated on groups with less political power), using Benjamin's approach would cause it to remain the choice not taken.

Third, we have historical examples of cultures that run counter to his purely theoretical construction. Easter Islanders cut down every last tree, regardless of his idea that the increasing costs will spur innovation and the use of alternative resources. Theories which have counterexamples should be re-evaluated.

Not the answer you're looking for? Browse other questions tagged environment recycling .

8
Does individual recycling have no observable global impact?

53
Does recycling create more pollution than it prevents?
7
Not recycling vs air travel - which is worse?
28
Do we need to wash our glass, plastic, and tin can recyclables?
8
Has recycling of paper reduced deforestation
8
Does individual recycling have no observable global impact?
10
Would an EMP in the US Cause all of our active Nuclear Power Plants to melt down and explode?
55
Does a dishwasher consume less water than manual dish washing
18
Does the US Federal Government want to cut down and burn trees on a property to protect an extinct frog?
4
Do colder temperatures increase our hunger?