Plants that release oxygen even at night

It is widely reported at several places that certain trees such as Peepal (Botanical name:Ficus religiosa) and Tulsi (Botanical name: Ocimum tenuiflorum) release oxygen even at night. My understanding has always been that photosynthesis can not take place in the absence of light. Is this phenomenon real?

The search results appear biased due to the religious connotations attached to the plants above, esp. in India. Here are some links where this is discussed:

ETA: There is another link that purports to explain the same, but uses so much jargon that it becomes impossible to decipher.

However, it is not true that they release large amounts of oxygen during the night. CAM is one of the three types of photosynthesis pathways occurring commonly in plants; the other two being C3 and C4 pathways.

Of these, C3 is the most common among land plants. CAM occurs primarily in desert plants and epiphytes (plants that live on other plants, usually large trees). CAM plants do not open their stomata during the day in order to minimise water loss. During the night, they open their stomata and fix CO{-2} in the form of malate .

During the day, they breakdown the malate and use the released CO2 through Kalvin cycle to produce sugars, similar to C3 plants. However, CAM is an energy inefficient reaction and hence plants use CAM only during certain conditions.

Peepal tree is a hemi-epiphyte in its native habitat i.e. the seeds germinate and grow as an epiphyte on other trees and then when the host-tree dies, they establish on the soil. It has been suggested that when they live as epiphyte, they use CAM pathway to produce carbohydrates and when they live on soil, they switch to C3 type photosynthesis.

So, Peepal tree would either release or not release CO{-2} in the night depending on if they are epiphytic or not. For other CAM plants, it would depend on if they have adequate water or not, or other environmental factors.

There are two pathways in photosynthesis.

The energy to drive these reactions come from sunlight. CO2 is absorbed via stomata, and O2 is released by the same stomata.

In CAM photosynthesis, or Crassulacean-Acid metabolism, the plant opens the stomata at night to minimize water loss in desert conditions. CO2 is acquired at this time, and stored in vacuoles as malate. During the day, the malate is released, decarboxylated releasing the CO2 to make it available for photosynthesis. Any O2 released by the light reaction can not escape during the day as the stomata are only opened at night. At the high temperatures of day, the oxygen dissolves into the cytosol of the cell. At night the stomata open, the plant cools and oxygen is liberated from the cytosol. 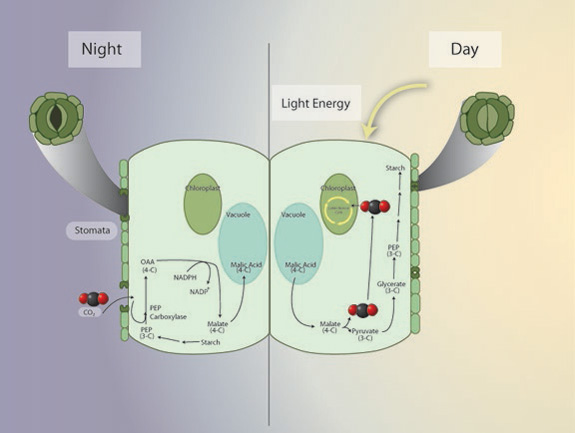 15
Is it better to water lawn in the morning or in the evening?
37
Do houseplants have any impact on oxygen levels?
28
Does grass alone produce enough oxygen for life?
26
Does a typical human on a western diet have undigested protein stuck in their body from years of eating certain foods?
10
Can plants sense human intentions?
8
When is the origin of Datura in India?
22
Do trees soak up pollution?
69
Do drop bears exist?
1
Did the Garuda Purana explain the formation of embryo and consciousness before modern science?
7
Does synthetic vitamin C contribute to the formation of genotoxins that can lead to cancer?