I find it hard to believe that dinosaurs ever existed. They were never mentioned and totally skipped in the holy books (Old Testament, New Testament, Qur'an) although these books do contain stories as old as it gets (to Adam and Eve, Noah, The Great Flood, and Ibrahim). How can we know dinosaurs existed?

There is a whole science dedicated to the study of fossils, which we know puzzled mankind at least since 500bc:

Dinosaurs is a very broad term and refers to a group of animals of which we have bones and entire skeletons.

Dinosaurs are a diverse group of animals of the clade Dinosauria. They first appeared during the Triassic period, approximately 230 million years ago, and became the dominant terrestrial vertebrates for 135 million years, from the beginning of the Jurassic (about 200 million years ago) until the end of the Cretaceous (65.5 million years ago), when the Cretaceous–Paleogene extinction event led to the extinction of most dinosaur groups at the close of the Mesozoic era. The fossil record indicates that birds evolved from theropod dinosaurs during the Jurassic, and consequently they are considered a type of dinosaur in modern classification systems. 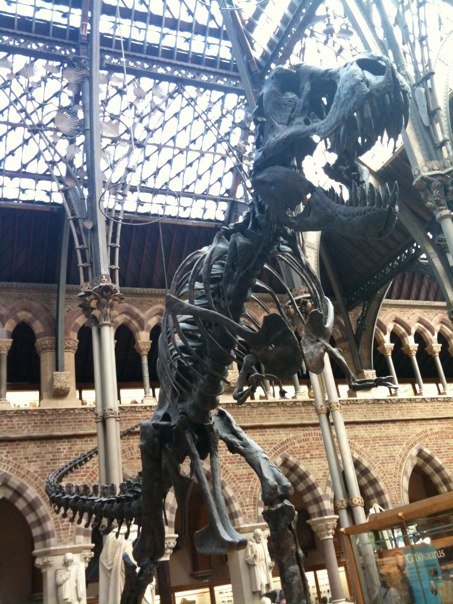 I own copyright for the photo

You can visit most museums and see or touch some fossils them if that convinces you.

Not the answer you're looking for? Browse other questions tagged fossil-record paleontology .

5
Did dragons exist?
11
Do living lizards exist inside stones?
3
Did large herbivorous dinosaurs have any predators?
3
Did modern birds exist during the Cretaceous period?
18
Did paleontologist Stan Taylor discover human footprints dated from the period of dinosaurs?
55
Did hominids and non-avian dinosaurs ever coexist?