Are there more guns in America than people?

There are now more guns in America than there are people...

(I'm guessing he is talking about "civilian firearms ")

From Wikipedia - Number of guns per capita by country: 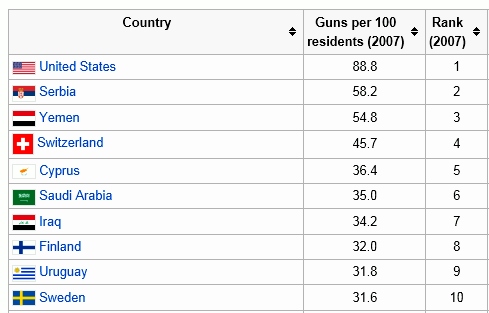 The above figure from 2007 is close to what Bill Maher claims, but a quick google search yielded no results for more recent figures. This made me wonder where he got his info from.

My question:
Are there now more guns (civilian firearms) in America than people?

There are no firm statistics for the amount of guns in the US at any one time. Estimates are based on surveys to gun owners, estimates of illegal guns and guns imported into and manufactured in the USA.

The issue also gets blurred if you choose to consider military bases or overseas territories as part of the USA and how broadly you want to define gun. For example, are self-made guns to be included?

According to the US Census, the population of the USA is about 311 million people.

Most reliable or semi-reliable estimates I can find for the amount of firearms in the US seem to put the number at between 200 and 300 million.

According to this Reuters report which quotes from a 2007 survey(I will link to it when I find it), U.S. citizens own 270 million firearms which would be less than the total population of the US.

According to data from the General Social Survey collected in 2004, there were approximately 44 million firearm owners with Americans owning 192 million firearms.[1]

A National Survey on Private Ownership and Use of Firearms from 1994 also put the amount of of firearms privately owned by Americans at 192 million.[2]

According to statistics from the NRA, it is estimated the total number of firearms owned by Americans in 2010 is about 300 million.[3]

It is not clear to me how these estimates are calculated, if they included seized guns or account for smuggled or self-made guns.

While it does not seem unreasonable to me that the number of guns in the USA could surpass the number of people living there, at the moment, the figures we have would indicate that this is not the case. These figures are restricted to the census population and privately owned firearms.

The number of firearms in the US could easily surpass the population.

21
Are more people accidentally killed by doctors than accidentally killed by guns and traffic combined?
12
Is it, in some parts of the U.S., easier to get a rifle than to register to vote?
5
Are more sunglasses sold in Seattle than in any other US city?
31
How often are guns used by private citizens in self defense per year in the United States?
23
In the USA, are there more African American men in prison than in college?
7
Deaths due to firearms in the US since Civil War
141
Are violent video games a better explanation of school shootings than access to guns?
6
Do illegal immigrants commit more murders than mass shooters?