Are law and medicine high-paying professions?

It seems to be taken as self-evident that law and medicine are one of the highest paying professions in the United States. However it seems to me that much of the high income from these professions can be simply attributed to the extraordinarily long hours they work. If evaluated as an "hourly rate" would law and medicine really stack up to professions like truck driving or skilled construction trades (e.g. electrician, plumber, carpenter)? If not, what is there to justify the incredibly high cost (in time and money) of obtaining the necessary training and education for law and medicine?

Active Oldest Votes
5
Want to improve this post? Add citations from reputable sources by editing the post. Posts with unsourced content may be edited or deleted.

For what it's worth, here's earnings data for graduates of law-related fields: 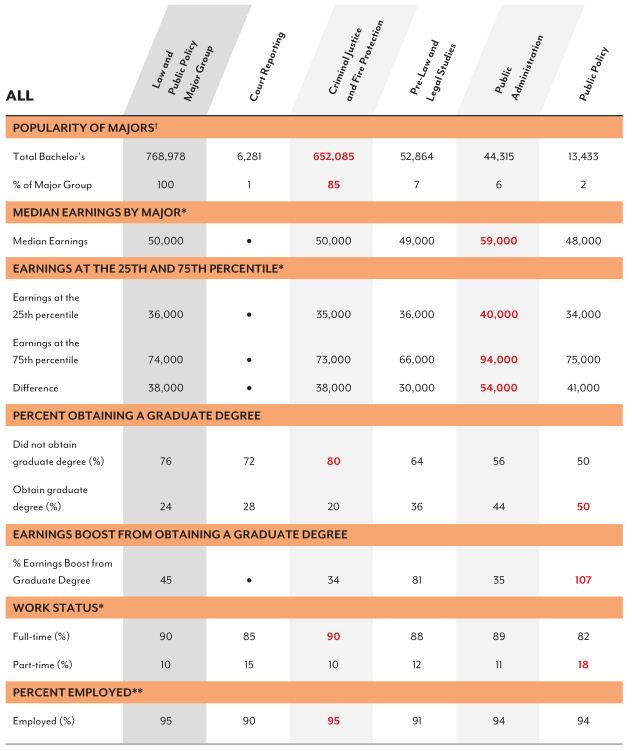 And here's the same for "health-related" graduates which appears to mostly concern nurses: 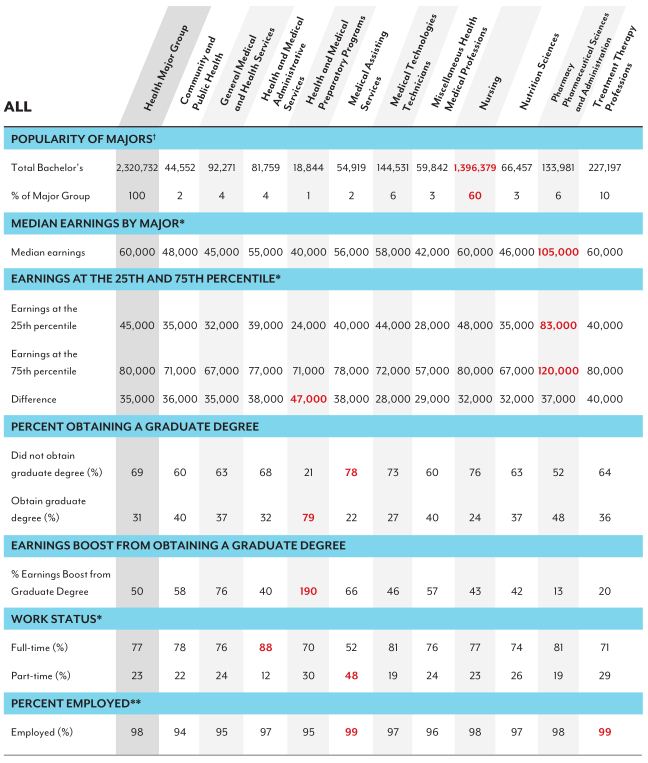 "Biology and Life Sciences" appears to mostly concern research biologists than MDs, so I omitted that. The data is coming from "What’s it Worth?: The Economic Value of College Majors", an 2011 publication by Carnevale, Strohl and Melton.

If not, what is there to justify the incredibly high cost (in time and money) of obtaining the necessary training and education for law and medicine?

Firstly, one does not often become, say, a plumber out of a burning passion to improve people's lives through better plumbing. One becomes a plumber to have a nice job that pays well, whereas idealism is a significant motivator for starry-eyed high school seniors who go into law and medicine. Say what you will, but it's obvious how a doctor would save lives (although that's not mentioning the numerous "boring doctors" who give you acne medicine and come up with a diet for your fat kids), and it isn't obvious how a plumber will.

Secondly, the education and practice of such technical professions requires building up a sizable amount of intellectual capital, if that's the word. Both medicine and law are such fields that learning them for its own sake can be rewarding to many people. The prospect of doing intellectually demanding (and satisfying) things and being rewarded for it is attractive to many people.

Third, there is often prestige associated with such professions, and even if it's baseless, it still matters. Stating you're an MD or lawyer commands an amount of respect in our societies that identifying as a truck driver or plumber doesn't, deservingly so or otherwise. Even if you yourself don't care about this, your parents may, and they influence career decisions for some people.

Fourth, there is no such thing as getting a double BS in Plumbing and Sewer Maintenance, going on to get an MS in Toilet Science, receiving your PhD for work on Efficient Urinal Architecture and joining the National Institute of Plumbers to work on a promising plumbing project. You just go out there and find customers. The prospect is daunting to many confused young men (and women?) and they find it easier to just run along these clear lines of successive qualifications which ostensibly guarantee a well-defined government job that involves using your technical skills and not marketing them. So there is the fact that it's "easier" to make the decision to become a lawyer, or doctor, than it is to become a plumber.

Fifth, men are overrepresented among truckers and plumbers, which may be driving women towards law and medicine and what not in their hope to escape a "male-dominated workplace".

Lastly, it is presumably easier to become a plumber after being a doctor for 15 years than it is to become a doctor after driving a truck for 20. (That would make for an interesting med school application!)

Yes, they are high-paying professions.

This matrix is used to estimate reasonable fees for lawyer's operating in the Washington, DC, metro area. Current values range from $305 / hr for someone 1-3 years out of law school to $734 / hr for someone 20+ years out.

If the proposition is that legal "high pay" arises from very long hours, we can start with a 40-hour-per-week, 50-week-year (2 weeks vacation!), which is not considered "long hours" by most Americans:

In contrast, according to Indeed.com, a truck driver might expect to make approximately $54,000 per year :

For the proposition to hold, it must be the case that some combination of the following conditions holds for lawyers:

(While the comparison is of the pay in a metropolitan area with a nationwide search, the order-of-magnitude difference establishes that the truck driver cannot make up the difference by working longer hours.)

Is (1) likely? Perhaps, in the case of lawyers working on contingency. But it is standard in the legal community to bill per hour, not on a fixed-bid, and anyone who has worked with a lawyer knows that they track their time assiduously.

Is (2) likely? Yes, but only to a certain extent. Lawyers and Doctors are required to "stay current" in their fields, a task which requires considerable time. But is this amount of time likely to be the large multiple of their billable hours that it needs to be to make the proposition hold? It can't "just" require 50% of their working week (20 billable hours @ $305 for our 2000 hr / yr lawyer is still ~$300K). For this to be the driving force, it would have to be such a large number it drives billable hours down to the order of, say, 10 hours per week (~500 billable hours / yr ~= $150K, which is at least in the ballpark of what a skilled tradesmen might gross).

Is (3) likely? I suspect it probably is for junior employees in large law-firms, which I believe typically follow the "agency model" of paying junior employees very much less than their billing-rate. But in the same model, senior employees and partners reap the rewards, so it all evens out. (There is, of course, the difference between gross and net income, but this is hardly unique to any profession.)

In summary, it seems unlikely that "much of the high income from these professions can be simply attributed to the extraordinarily long hours they work." A person working for several dozens of dollars per hour cannot put in so many more hours that they are on parity with someone making a few hundreds of dollars per hour, unless the conversion of the higher-rate into income is very inefficient. While there are some inefficiencies that are evident, they fall well short of reducing income to the level of a skilled tradesperson.

UPDATE: The Bureau of Labor Statistics provides this sortable table of wages by job function; medical and legal professions dominate the high-income professions, with mean lawyers wages at $130,490: 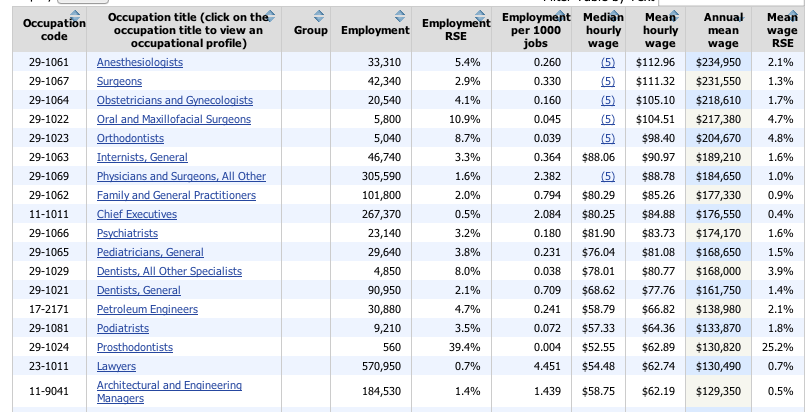 Electricians' mean wages are $52,910 and "heavy and tractor-trailer truck drivers" wages are $39,830. While these numbers represent wages, not gross or even taxable income, and are means, they further argue against the proposition that much of the disparity can be "simply attributed to the extraordinarily long hours they work." Even if you start with the (wildly incorrect) premise that truckers earn their current $39,830 by only working 40 hours per week, they would have to more than triple those hours to make mean lawyer wages.

I'm in no way saying that lawyers and doctors are not hard-working, it may well be the case that one cannot maintain standing and competence without working, say, 70 hours per week. (They are not unique in that respect.) Their careers start late relative to those in the trades and their training costs are very high: all true. Perhaps it is a bad economic or life-quality decision to be a lawyer or a doctor: could be.

But they are high-paying professions.

Not the answer you're looking for? Browse other questions tagged medical-science united-states law .

11
Are Auto Manufacturers required under US Federal Law to provide parts for a set period of time?
7
Are the UK and Sweden in violation of international law with respect to detaining Julian Assange?
3
Are phone calls unencrypted and forced by law to be unencrypted in India?
8
Are homeopaths using diluted saliva from a rabid dog as medicine?
17
Did a senior U.S. Justice Department official state that 3- and 4-year-olds can learn immigration law well enough to represent themselves in court?
7
Does Florida have a law which states that unmarried women are not allowed to go parachuting on Sundays?