Does Vitamin D created by sun exposure get washed off in the shower?

A recent article by Dr Mercola on a health advocacy web site makes a number of claims about Vitamin D production in your skin. The most surprising to me is the claim that you can wash off a meaningful fraction of the Vitamin D created due to sun exposure if you wash with soap within two days of sun exposure.

It's important to understand that vitamin D3 is an oil soluble steroid hormone. It's formed when your skin is exposed to ultraviolet B (UVB) radiation from the sun (or a safe tanning bed). When UVB strikes the surface of your skin, your skin converts a cholesterol derivative in your skin into vitamin D3.

Therefore, if you shower with soap, you will simply wash away much of the vitamin D3 your skin generated, and decrease the benefits of your sun exposure. So to optimize your vitamin D level, you need to delay washing your body with soap for about two full days after sun exposure. Now, few are not going to bathe for two full days. However you really only need to use soap underneath your arms and your groin area, so this is not a major hygiene issue. You'll just want to avoid soaping up the larger areas of your body that were exposed to the sun.

According to Wikipedia (lacking a direct citation), Vitamin D3 is made in the inner layers of the epidermis, which one would expect to be insulated from the effects of washing with soap.

Breakdown of the claims

There are a couple of claims contained together in this question.

In accordance with the original claim I will mostly not differentiate between the different forms of vitamin D, like cholecalciferol (D3) as formed in the skin or the "active form" calcitriole (D1).

This "Vitamin D is formed in your sebum" (" the vitamin D3 that is formed is on the surface of your skin") is certainly not true in any meaningful amount.

But this doesn't stop 'experts on the net' from repeating this claim. Sometimes with reasoning, but without experiments to confirm that. But with ample additional reason, namely the conflict of interest that is called: reasons to sell supplements in the latter:

The only other possibility I can think of is an obscure paper from 1937, a paper that continues to be ignored. The authors obtained surface oils from young men, sebum. In the first experiment, they irradiated the oils and in a second experiment irradiated the young men. They collected the sebum and showed that irradiated sebum cured rickets in rats (showing effective treatment of rachitic rats was the only way of measuring vitamin D activity in 1937). The authors concluded, “The evidence presented in the two groups of experiments indicates that washing the human skin by the usual methods removes vitamin D and its precursors from the outer layer of the skin.”

Even more upsetting, they concluded, “There is definitive evidence that the secretions from the skin contains precursors of vitamin D, which after irradiation are to be reabsorbed by the body, and the removal of which tends to produce a dearth of the vitamin unless it be supplied in some other form.” I could not see evidence that they supported this statement with their research. What they showed was simple.

Humans make some vitamin D on the surface of their skin, which water washes off. How much humans make on the surface and how much inside the skin, no one knows. However, the vitamin D levels of the African tribesmen support (but do not prove) the proposition that humans living in a natural state make a significant proportion of vitamin D on the surface of their skin for later absorption. Assuming the African hunter-gatherers do not take showers twice a day that so many cosmetically brainwashed Americans do, then simple water, especially soapy water, routinely washes off oils containing vitamin D in modern humans. This means we must add soap and frequent showering to the list of things that explain why modern vitamin D levels continue to decline, decade after decade. (emphasis added)

That life guards apparently in Hawaii do not shower compared to surfers according to this argument seems like a bit of a stretch.

In there neither showering nor washing are mentioned. What is mentioned:

A probable explanation for the “low” 25(OH)D status of some individuals is found in their failure to obtain high circulating D3 concentrations. Possible explanations for this include inadequate cutaneous production of D3, enhanced cutaneous destruction of previtamin D3 or vitamin D3, down-regulation of cutaneous synthesis by sun-induced melanin production, or abnormalities of transport from the skin to the circulation.

This was a very small sample and a study with multiple more shortcomings. Just correlating self-reported exposure time with blood levels? What if the life guards are egg munching carnivores and the surfers all underweight vegans? Vitamin D needs precursors, not just sunlight. (The surfer-study at least claimed to have controlled for dietary vitamin D intake. 'How' was left unrevealed.)

Second, what is sebum? Sebum, secreted by the sebaceous gland in humans, is primarily composed of triglycerides (~41%), wax esters (~26%), squalene (~12%), and free fatty acids (~16%). Vitamin D is not built from "fat" or fatty acids but cholesterol like molecules together with some proteins, both usually absent in sebum but present in the skin.

Third, how is vitamin D formed with sunlight exposure? 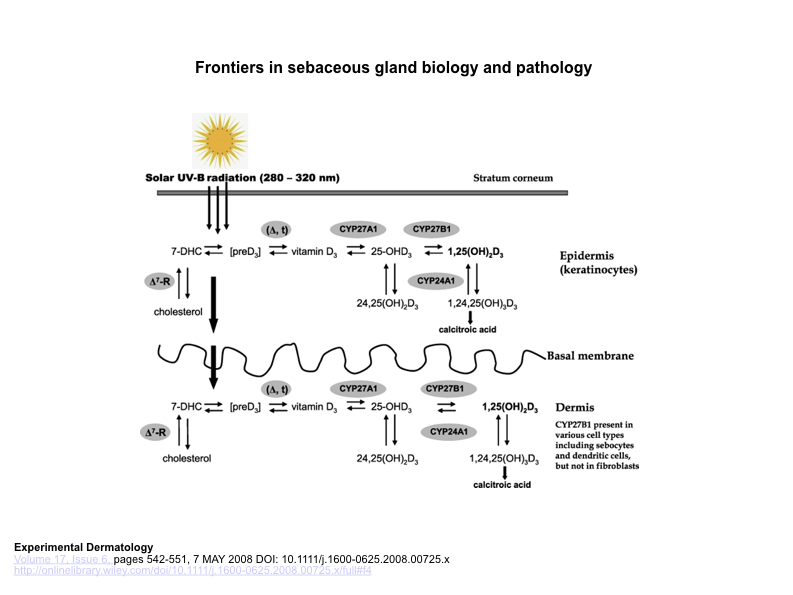 (notice the barrier and the direction of arrows)

Synthesising vitamin D needs more than just sunlight. Irradiating cholesterol does not yield what you want. You need those enzymes that are not present on your skin. Any vitamin D present on skin comes from within.

Cutaneously synthesized or orally ingested vitamin D is transported in the circulation bound to vitamin D binding protein (DBP). In the blood, only a small fraction is present as free, unbound vitamin D metabolites. The 25-hydroxylation of both vitamin D2 or vitamin D3, is the initial step in vitamin D activation. This takes place primarily in the liver. […] Nevertheless, extra-hepatic sources of 25-hydroxylation have been described in humans as well. They include macrophages, fibroblasts, keratinocytes and arterial endothelial cells (Gascon-Barre, 2005). (p. 365)

Meaning two things: The main producer sites for the vitamin do not secrete out of the skin and only a small fraction would be present to do so.

There are no reports of vitamin D intoxication in healthy adults after intensive sunlight exposure. Vitamin D in the skin reaches a plateau after only 15–30 min of UVB exposure. Then, vitamin D-inactive substances such as lumisterol and tachysterol are produced, which do not reach the systemic circulation. (p. 367)

That means that only a small amount is available:

Its precursor 7-dehydrocholesterol in the plasma mem- branes of both epidermal basal and suprabasal keratinocytes and dermal fibroblasts is converted to previtamin D3. Cutane- ously synthesized vitamin D3 is released from the plasma membrane and enters the systemic circulation bound to vitamin D-binding protein (DBP) […] Factors influencing vitamin D levels Nutrient deficiencies are usually the result of dietary inade- quacy, impaired absorption and use, increased requirement, or increased excretion. Vitamin D deficiency can occur when usual intake is lower than recommended levels over time, exposure to sunlight is limited, the kidneys cannot convert 25(OH)D to its active form, or absorption of vitamin D from the digestive tract is inadequate. Vitamin D-deficient diets are associated with milk allergy, lactose intolerance, ovo-vegetarianism, and veganism [37]. Regarding the amount of vitamin D production in human skin, it depends on several variables including environmental factors such as geographic latitude, season, time of day, weather conditions (cloudiness), amount of air pollution and surface reflection which can all interfere with the amount of UVB radiation reaching the skin […] The skin is unique in being not only the source of vitamin D for the body but also in being capable of responding to the active metabolite of vitamin D, 1,25(OH)2D. Both 1,25(OH)2D and its receptor (VDR) play essential roles in the skin.

From: Vitamin D and the skin: Focus on a complex relationship: A review Note the role of vitamin D that has to go from the skin through liver and kidney back to the skin to have these effects.

And finally fourth: how much evidence does this guru cite for his version of "be careful with soap"? "New evidence suggests" that one has to be able to read it to gauge its accuracy and validity. Guru's link number iv, entitled "iv Acta Biochimica Polonica. 2012 Mar 17. [Epub ahead of print]" is indeed the same link as the third link again (UVB-Primer.pdf from Colorado State University). Answering this fourth question has to go like "zero evidence". In fact it is such a crazy idea in itself, that I had to go through web-archive to even get to the part cited in the OP question, since it has apparently been silently retracted since then. Only in the older comments do people talk quite lively about "showering" despite the article no longer mentioning it now.

Seems sad to not have an excuse for avoiding the shower? But if you need one, "vitamin D reduction" is most certainly not very suitable.

Vitamin D is present on the human skin, and transported there with sebum, but only in small amounts compared to what is transported away inwards. Whether from sunlight or nutrition, excretion of that substance is low. Synthesised with sunlight vitamins are mostly transported away from the skin into the rest of the system, not outwards.

Once present on the skin the vitamin can be absorbed through the skin, regardless of origin. But again, compared to internally absorbed amounts or currently illegal ointments containing vitamin D the amount is very, very small – not meaningful.

As a fat soluble substance on the surface of skin it then can be washed away from there. But the impact of the small fraction present on the skin is not a justifiable excuse to avoid washing for 48 hours after sun exposure. 20 minutes of sun exposure have been experimentally shown to be enough time in regular individuals at not too extreme latitudes to produce adequate amounts of vitamin D (while totally disregarding washing behaviour).

If washing would be a concern for vitamin D (re-)absorption than washing would not be the only problem there: the skin microbiome eats away at it, your own sweat washes it away, abrasion diminishes it and then we have this impractical invention of clothing where a lot of the sebum from your skin ends up in if you look at white collars after wearing them for a while.

In Summary: a very small grain of truth seems to be in the original claims. The proportions and conclusions drawn from that are widely off. As phrased in the title, the claim is true in theory – but very largely irrelevant in application.

46
Does staring at the sun cause significant, permanent harm?
11
Does hair grow faster in the sun?
30
Are sunscreens necessary?
3
Does Vitamin C in Indian Gooseberry have skincare benefits when applied directly to skin, or when eaten?
122
Can drinking "harmonized" water prevent sunburn
6
Does glass allow UV-A rays to pass while blocking UV-B rays?