Do police officers and firefighters have a shorter than average life expectancy?

I have run across several references that mention that police officers and firefighters have a much shorter life expectancy than average. Is this claim true? Are there any reputable studies that have been done on this topic?

This was an easy one! The claims were referenced. I randomly clicked on the second link which claimed:

Firefighters have shorter life expectancies than the average population and are three times more likely to die on the job, due to inherent risks, physical and mental stresses, and exposures to toxic and carcinogenic compounds released in smoke. (source: US Bureau of Labor Statistics, University of Cincinatti.

Then I randomly clicked on the first link (although here is an easier-to-read PDF).

In this paper, they look at the fatality rates for both firefighters and police officers.

They conclude that the relative risk of dying for both professions is around 3 times the size of the general population.

Although occupations such as timber cutter, fisher, seaman, and aircraft pilot have the highest fatality rates, they are found in relatively few parts of the United States. [...] Firefighters and law enforcement personnel, on the other hand, are found in every community in the United States. Although the dangers are quite different, both groups experience high fatality rates and risks.

If you're thinking about "lifespan after retirement" rather than "dying before retirement", then it's not true.

Everything I see on firefighter health indicates there's no meaningful difference in mortality rates of public safety employees and other government workers. CalPERS (California Public Employees' Retirement System) produced an experience study and little difference was found for police and firefighters vs. the other public employees: 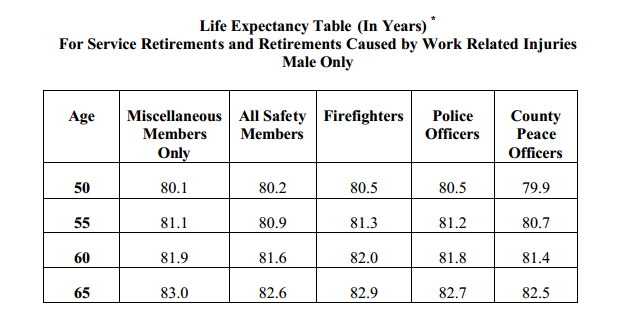 Since the differences in mortality between miscellaneous members and safety members were not material, we are recommending to continue the use of the same post-retirement mortality tables for all members.

The Politifact fact-checking site used this study (and the lack of other evidence) to conclude a similar claim was false.

In the latest California study, police officers were actually expected to live a bit longer than other state employees. In Oregon, the combined life expectancy for police and fire was only slightly less than average.

We rate Barber's statement as False.

Not the answer you're looking for? Browse other questions tagged environmental-health work life-expectancy .

26
Is the average life expectancy of a pornographic actor significantly lower than the rest of the population?

26
Was the world life expectancy only 30 years at 1900?
9
Are left-handed people more likely to die younger than right-handed people?
11
Does flossing your teeth regularly increase your lifespan?
13
Is this graph of life expectancy pre and post Chernobyl accurate?
19
Is life expectancy of an Amish person same as average in US?
26
Is the average life expectancy of a pornographic actor significantly lower than the rest of the population?
15
Do homosexuals have a shorter life expectancy than heterosexuals?
30
Did people in ancient times, who survived childhood and were not killed in wars, have roughly the same chance to reach old age as contemporary people?