Does the Australian Government provide more pension to refugees than the elderly?

A few years ago, a viral email in the USA falsely claimed that refugees received greater weekly welfare support than American retirees.

Claim: The U.S. government provides a much greater monthly allowance to refugees than to retirees.

They also mention variants circulated with the numbers the same, but Australia substituted for America.

It looks like a different version is now being circulated about Australia. 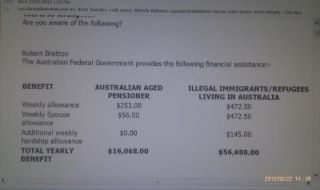 Asylum Seekers in Australia are not eligible for Government assistance until their claim for asylum has been assessed. Currently, the Red Cross runs a program that provides assistance during this time. The Red Cross pays 89% of the Centrelink allowance, which is as of now $405.84 per fortnight.

Once an asylum seeker has been processed and is deemed to be a genuine refugee, they are granted permanent residency and afforded the same benefits that anyone in Australia gets - no more, no less.

The current Centrelink welfare payment for Citizens and Permanent Residents is $456 per fortnight. A pensioner in Australia receives $671.90 per fortnight.

This claim is utterly false.

Just like the similar claims for the US and Canada, there is no justfication for what is said in these emails. In fact the figures are based on the Canadian emails that Snopes debunked. So says the Hoax Slayer website.

The figures quoted in the email bear no resemblance to income-support payments to pensioners, or to payments to refugees settling in Australia,' DIAC spokesman Sandi Logan said today. The text and figures in the email appear to have originated in Canadian emails, websites and internet chatrooms. We suspect that the email circulating here has been cut and pasted from these sources