Do CFL light bulbs last >8 times as long as incandescents?

It is claimed that CFL bulbs will last many times longer than incandescents; Wikipedia gives a figure from 8x to 15x. My own experience is that I'm replacing CFLs far more often than those figures would lead me to expect.

Are there factors that would shorten the life of the bulb significantly? Are there reasons to believe the manufacturers are being overly optimistic in their lifetime estimates?

Short answer: depends how they are designed and how you use them.

The important thing to understand about any sort of fluorescent tube (including CFLs) is that it will have rather more ways to fail than a simple incandescent bulb.

An incandescent bulb is, essentially, a carefully tuned resistor designed to heat up to a white heat when a normal current flows through it (the resistance and voltage depending on the country and bulb type with DC bulbs usually being 12v and mains AC bulbs being 110v or 220v roughly). They fail when the resistor filament breaks usually because even tungsten evaporates slowly when white hot. Some specialist bulbs (eg halogens) are made of specialist materials to minimise this effect and allow the filament to run hotter which is why they emit "whiter" light. There are few, if any, external effects that alter this basic mechanism and change the lifetime (except extreme physical shock isn't usually significant for fixed fitting in houses).

Typical fluorescent tubes are far more complicated. The light is emitted by a phosphor coating on the inside of the glass which is excited by ultraviolet light from a discharge in mercury vapour inside the tube. But getting a discharge to start and be sustained in the tube is not trivial. Domestic tubes rely on a ballast which contains some electronics which kick-starts the discharge and controls the current to a constant level. To achieve a reasonable current the electrodes are usually heated (exactly like a normal incandescent bulb but cooler).

Bearing this in mind, there are three key ways the lamps can fail. The electrodes can fail by the same mechanism as a standard bulb; the electronics can fail; and the phosphor can "wear out". Moreover, because they are more complex than simple incandescent bulbs, the way they are used can impact those failure modes. As the Lamptech site summarises (talking mainly about standard linear tubes, but the mechanisms are the same in CFLs):

It is relatively complex to specify the lifetime of a fluorescent lamp, because it depends on several variables and can be defined in different ways. Contrary to other light sources they do not always reach an abrupt failure point, but gradually lose their initial performance as they age. Often the light output may decrease so much that the tube is considered useless and must be replaced even though it is still producing some light. The useful lifetime of linear fluorescent lamps can vary from 6,000 hours to 60,000 hours depending on its construction, the operating conditions and type of control circuit.

The long term life depends a lot on the phosphor lifetime (why build all the other components to last a very long time if the lamp slowly dims to the point of uselessness because of phosphor degradation?) Modern phosphors tend to last longer than older types. see this chart from The Lamptech site: 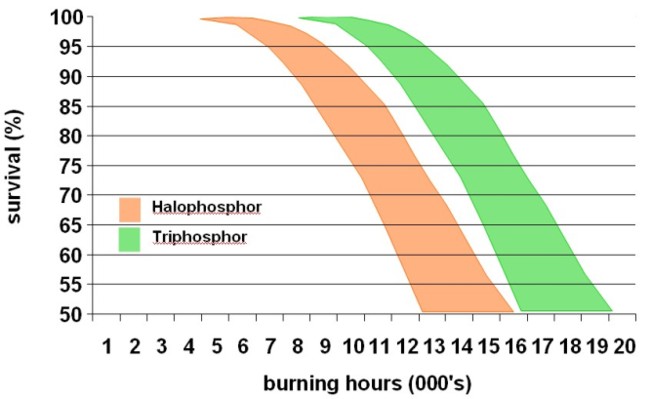 Both the lifetime of the electronics and the electrodes are somewhat dependent on the way the bulbs are used. This is because kicking off the gas discharge is stressful for both compared to sustaining it. The result is that the actual operating life depends strongly on how often the lamp is switched on. Lamptech summarises:

Each switching causes progressive erosion of the electron-emissive materials with which the electrodes are coated. The rated life will be achieved only when the frequency of switching does not exceed 8 times per 24 hours. Increased switching frequency can result in a dramatic reduction of life. Conversely the lamp can achieve up to double its rated life if it is switched on only once and never turned off again. The strong inter-relation between switching frequency and lamp lifetime is illustrated in Figure F15: 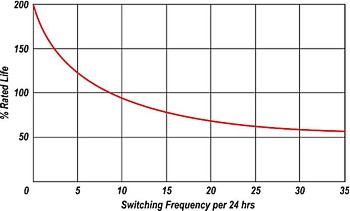 These general principles apply to linear tubes and CFLs. There have been specific studies on the relationship for common CFLs. One where the detail isn't hidden behind a paywall is found in the Journal of Industrial Technology (pdf). The paper contains some analysis of the economics of using CFLs in different environments and with different switching frequencies. It also contains some links to other studies (but most are paywalled). Unfortunately it is written in a fairly opaque style and lacks a decent summary. But it does explain why the stated lifetimes of CFLs may be unrealistic for some consumers (my emphasis):

CFL manufacturers give consumers estimates of lamp life based on daily operating times of four hours per day but do not include the impact of life reduction due to starting.

The paper's key conclusion is that CFLs may not make economic sense if frequently turned on and off because of their short resulting lifetimes. If you want further technical detail of how they generated realistic lifetimes from actual experiment it is worth ploughing through the technical detail.

So, to answer the original question, CFLs can last as long as manufacturers claim, but there are plenty of real world patterns of use where they will not.

Not the answer you're looking for? Browse other questions tagged consumer-products compact-fluorescent-lamps .

6
Do fluorescent lights use more power to turn on?

15
Do CFLs have a significant impact on your light bill?
14
Are CFLs always more ecologic than incandescent light bulbs?
15
Do Compact Fluorescent Lamps (CFL) create dirty electricity which can impact health?
7
Could cutting one's self on a broken CFL bulb cause severe injury?
42
Do LED light bulbs last as long as claimed by the manufacturers?
8
Do Duracell batteries last longer than normal batteries?